After seventy years of life and forty-six years of being a professional film critic, Roger Ebert died on April 4. As a longtime reader of his reviews and an occasional reader of his personal blog, I had a love-hate relationship with his opinions. 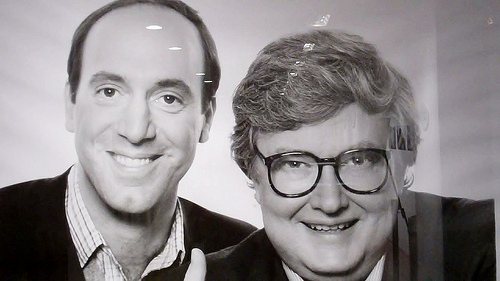 On the other hand, just as there were some movies Roger Ebert hated, hated, hated, he could make me mad, mad, mad. His blog posts in the 2008 election were characterized by a seething hatred for Sarah Palin that seemed to have less to do with her political viewpoints and more with what he imagined she was like as a person. He interpreted Massachusetts’s election of Scott Brown as an insult to Ted Kennedy, not the right of a state’s citizens to pick their own advocates. His views on the Tea Party seemed to be based less on his personal observations and more on what liberal media outlets told him the Tea Party was secretly up to. On a less serious note, I could not believe he actually thought Crash was more deserving of Best Picture than Brokeback Mountain.

Still, Roger Ebert left a valuable legacy about what disabled individuals could accomplish. After surgeries to save him from cancer of the thyroid and salivary glands, he was no longer able to speak or eat. His entire lower jaw was removed, and his appearance was startling for those who had watched him for years on TV. Yet Ebert continued to embrace his life.

He kept attending film screenings, holding festivals, and regularly appearing in public – refusing to see his disabilities as a reason to hide. He reviewed and blogged almost constantly. Many people would look at a life without food or speech as a life not worth living, but Ebert, simply by continuing his career to the full extent that he was able, dared them to think otherwise.

Ebert was raised Catholic and had a complex relationship with the faith. While I was reading through some of his last blog posts, I came across a post he made about the resignation of Pope Benedict XVI, in which he expounded on his beliefs:

Birth control? Here I subscribe to an unofficial ‘double’ loophole often applied in practice by Catholics faced with perplexing choices: Do that which results in the greater good and the lesser evil. I support freedom of choice. My choice is to not support abortion, except in cases of a clear-cut choice between the lives of the mother and child. A child conceived through incest or rape is innocent and deserves the right to be born.

True to form, it’s another love-hate reaction from me. I wish Ebert had put abortion into the category of things that should not be subject to choice, like the murder of born people. Yet I also admire the fact that he was willing to express a disagreement with his fellow liberals and speak out for the rights of the unborn. It’s not easy or enjoyable to open yourself up to criticism from the people who you usually side with.

Roger Ebert was a complex person who liked to give his readers something to think about. An innocent child’s right to be born is certainly one of those things we all ought to think more about…