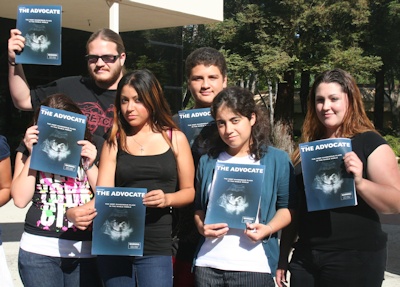 1. Participate in the Pro-Life Day of Silent Solidarity

What: An annual day of silence honoring the millions of our generation who have died from abortion. Join young pro-lifers from across the country on Tuesday, October 15th, 2013. You can print out pre-designed handouts that explain why you’re not talking to give to inquisitive souls throughout the day.

Why it’s quick: It actually saves you lots of time since you don’t have to spend time chatting for a whole day.

Why it’s easy: Not talking is even easier than talking! Think about the vacation your vocal chords will enjoy!

What: Stand in the quad (or whatever area of your campus is the most crowded) with a few friends and clipboards at rush hour (lunch, for example). As people walk by, poll them with a question like “Do you think abortion should be legal?” The point of polling is not really the poll; it’s to start conversation. You may win over some hearts to the cause, and if you don’t, at the very least you got people thinking, and that’s a victory in itself.

Why it’s quick: You have to stand there only as long as you have time to.

Why it’s cheap: It’s free, which is better than cheap.

Why it’s easy: It’s within your right to free speech, so there shouldn’t be any hoops to jump through. At a private school, just make sure your bases are covered (or at a conservative university, you may have the green light without even seeking approval). 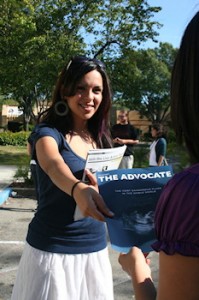 What: Order a million or so copies of The Advocate newspaper from Live Action here. Give them to everyone, and then find more people to give them to.

Why it’s quick: Grab a stack and start saying “Here ya go” to everyone who walks by. That’s about it.

Why it’s easy: “Here ya go.” Doesn’t even require a neuron to fully fire, if you ask me.

What: Call the local pregnancy resource center and ask what baby items they need. Get some big boxes and slap flyers on them that say “DIAPER DRIVE” with a list of the items needed and what organization they’re being donated to, as well as the deadline for donating. Leave the boxes at the dorm entrances, or wherever the school says it’s OK to leave them. Wait for them to fill up, and then pick them up and deliver the donations to the center.

Why it’s quick: Most of the work is waiting for the boxes to get filled up.

Why it’s cheap: You can ask your local grocery store to donate the boxes.

Why it’s easy: Cardboard boxes, a phone call, and a delivery are all it takes!

What: Get a few friends and a bucket of chalk together. Everyone grabs a piece of chalk and writes a big pro-life message on the sidewalk. You can chalk informational tidbits to give passers-by something to think about, like 55 million aborted since 1973, or Heart starts beating at 22 days, or Pregnant? Here’s the number to a place that can help: ___________. It’s also fun to do group chalking projects, like drawing 55 hearts with the banner: Each heart represents one million that stopped beating since Roe v. Wade. Be creative.

Why it’s quick: At a public school, you don’t even need to get permission to do this. It’s in your freedom of speech laws, and that’s what you can tell anyone who tries to make you stop. At a private school, it usually just requires that your pro-life group is official, and a phone call or signature from someone in Student Life. The actual chalking takes 15-30 minutes, tops.

Why it’s cheap: Chalk is cheap…like, really cheap. And most universities have it on-hand already if you know where to look.

Why it’s easy: A five-year-old can chalk, and you’re probably bigger and stronger than a five-year-old. And hopefully you have better penmanship.