An estimated 300 preborn babies are killed every day by late abortions, according to new data just published by the pro-abortion Guttmacher Institute. In addition, between 2017 and 2020, the number of late abortions appears to have risen nearly 8% in recent years. New abortion data also indicates that abortions committed later in pregnancy (13 weeks and up) could now total over 108,000 per year, with nearly 12,000 of those committed at or after the 21st week of pregnancy.

Children born prematurely at 21 weeks are reported to have survived with medical assistance.

Guttmacher abortion data is considered more comprehensive than data from the Centers for Disease Control and Prevention (CDC) for a number of reasons. For one, the CDC gathers only information provided to the state — and since there are no federal requirements requiring facilities to report abortion data, CDC data is lacking. Guttmacher sends surveys to all abortion facilities to collect information, which usually results in higher abortion numbers than the CDC’s.

In 2019, the CDC recorded a total of 629,898 abortions from 49 states, which voluntarily reported these numbers on April 9, 2021. An estimated 6,300 babies were aborted at or past 21 weeks gestation in just 43 reporting areas, according the most recent CDC data. In addition, an estimated 39,000 abortions were committed between 14 and 20 weeks gestation. That means that over 45,000 babies were reported by the CDC to have been aborted at 14 weeks and later.

In June of 2022, Guttmacher published its abortion numbers, reporting a total of 930,160 abortions in the U.S. for 2020. The former “special affiliate” of Planned Parenthood did not update the percentages of abortion by gestation in that report; therefore, Live Action News is using percentages from Guttmacher’s graph below, from 2016, to estimate late abortion data.

Guttmacher recently estimated that nationally, between 6.3% and 7.4% of all U.S. abortions are obtained at or after 15 weeks of pregnancy, and the vast majority are done by D&E, an abortion method that involves the direct dismemberment of a child in the womb. Others include gruesome procedures once used years ago.

This was the cutoff presented to the Supreme Court by the State of Mississippi in the Dobbs v. Jackson Women’s Health Organization case. A leaked draft opinion in the case has implied that a majority of Justices on the High Court could be set to overturn Roe v. Wade, sparking protests and a string of violence against the Court as well as pro-life centers and churches nationwide.

Using Guttmacher’s previously published percentages for 2016 mentioned above, along with the updated abortion data for 2020, Live Action News estimates that abortions past 15 weeks now total in the range of 58,600 to nearly 69,000, an increase of 9.5% from where Guttmacher previously estimated. This brings the daily national death toll for babies killed at or after 15 weeks to between 160 and 189.

Both the CDC and Guttmacher have acknowledge that abortions committed at 21 weeks or later represent 1% to 1.3% of all reported abortions — and this is no small number.

Using Guttmacher’s 1.3% figure, we estimate that nearly 12,100 babies were aborted at 21 weeks gestation or greater in 2020, a total of nearly 33 babies every single day — more than the average Kindergarten classroom.

Possible reasons for the increase of late abortions

Possible reasons for the increase can include the fact that abortion numbers overall are increasing. In addition, abortion corporations like Planned Parenthood have expanded to commit even later abortion in places like California.

In addition, programs like the Later Abortion Initiative (LAI) may have also contributed to higher numbers. The Later Abortion Initiative (LAI) was launched in 2007 “to promote a strategic vision for securing access to and provision of second-trimester abortion care in the United States.” Abortion enthusiasts like Daniel A. Grossman, MD, and Diana Greene Foster (author of the debunked Turnaway Study) sit on the LAI board. 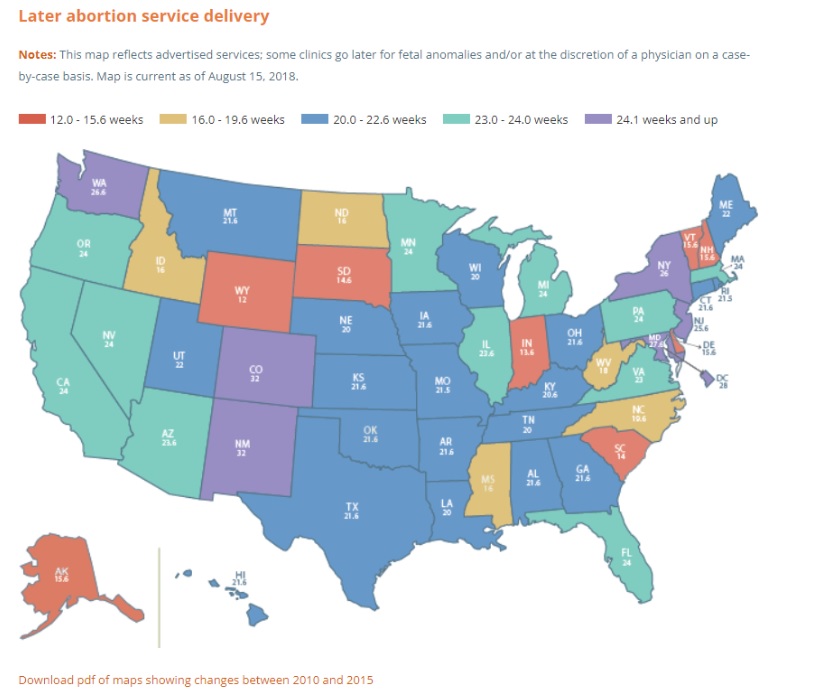 LAI also states that, “Hospitals provide only 5% of all the abortions performed in the U.S. Many hospitals provide abortions only in cases of fetal anomaly or serious risk to the pregnant person’s health, while some will provide later abortions in selected situations based on the judgment of the clinician team. Some teaching hospitals have excellent abortion services integrated into their obstetrics/gynecology department.” LAI’s Clinicial Referral PDF claims that even ACOG will offer “[r]eferral info for later abortions (ACOG members only).”

But according to the Charlotte Lozier Institute (CLI), “Relatively few late-term abortions are performed on babies who have fatal birth defects. A study in 2013 (Foster, Kimport) published in Perspectives on Sexual and Reproductive Health, a now-defunct journal of the pro-choice Guttmacher Institute, found that women undergoing late-term abortions offered the same reasons as their counterparts who were seeking earlier abortions. Although the study did not include women undergoing abortions due to fetal anomaly or risk to their own lives — a significant limitation — one of the study’s authors is quoted as stating that abortions for fetal anomaly ‘make up a small minority of later abortion.’” 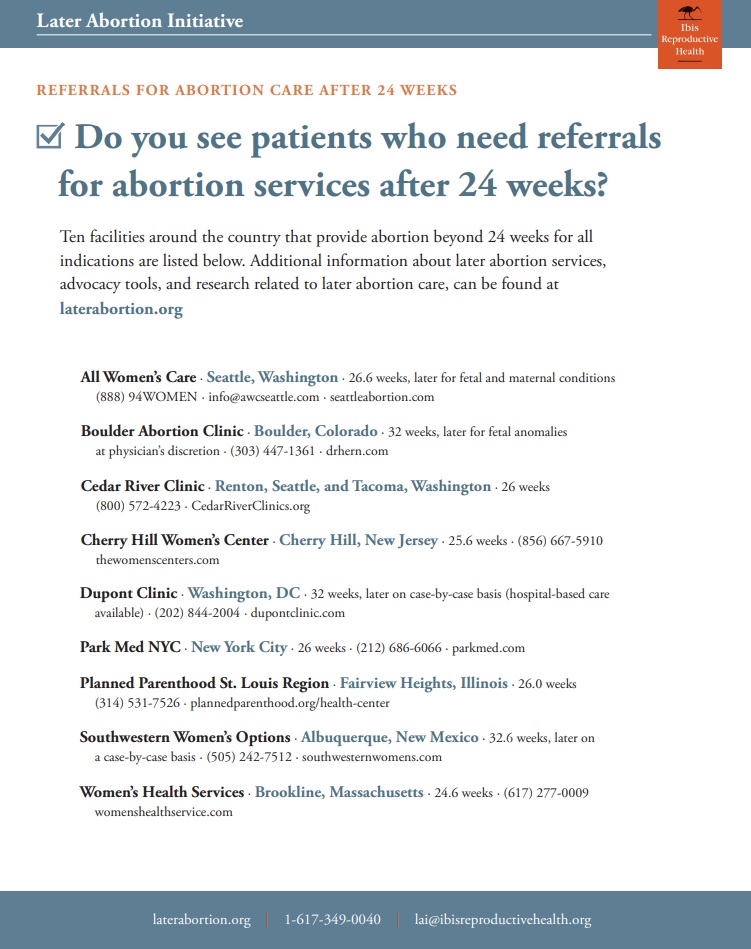 Missing on the referral form is abortionist Dr. Cesare Santangelo, who commits late abortions at his Washington Surgi-Clinic abortion facility in D.C, where five very late term babies were discovered in a medical waste container by pro-life activists.

Live Action’s Inhumane investigation caught Santangelo (watch below) and other later abortionists admitting they would deny medical care or refuse to resuscitate a viable child who survived an abortion, in direct violation of the Born Alive Infants Protection Act.