Abortion clinics are closing at an “alarming rate,” according to the Abortion Care Network (ACN), a membership organization of independent abortion providers. In the organization’s most recently published report for 2021, ACN claims that 113 so-called “independent” abortion facilities (excluding Planned Parenthood facilities, hospitals, and physician offices) have closed since 2016. In addition, as of November of this year, ACN claims 20 independent abortion clinics (IACs) have been shuttered, an increase from the 14 closures in 2020. Since 2012, independent clinics in the U.S. have decreased by 30 percent, the ACN claimed. 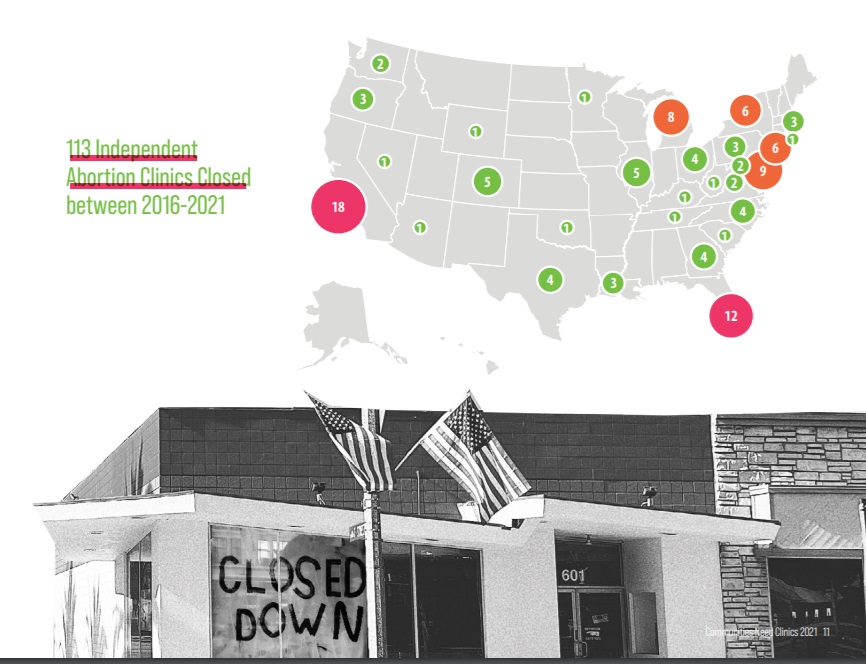 The data collection for the report was done “in partnership with ineedanA.com,” described by ACN as “a comprehensive online and SMS directory of abortion clinics in the U.S.” that “updates clinic listings throughout the year.”

While ACN’s report blames “extreme abortion restrictions” for abortion facility closures, there is an indication that the economic strain brought on by the COVID-19 pandemic financially impacted independent abortion businesses.

“In 2021 alone, states have passed over 500 abortion restrictions, enacting over 100 of these medically unnecessary restrictions,” ACN states. Yet, in March 2020, ACN claimed the pandemic impacted staff reductions due to quarantine or illness or reduced surgical abortions. In December 2020, Nikki Madsen, ACN’s executive director, told Vice.com that finances are leading to clinic closures.

ACN’s 2021 report states, “Over the last two years, 34 independent clinics have been forced to close in the United States. Of those clinics, 74 percent provided care after the first trimester.” ACN called the closures a “disproportionate threat to the availability of abortion care.”

According to ACN, while Planned Parenthood commits 37% of abortions, independent abortion facilities “make up 25 percent of the facilities offering abortion care” while providing “58 percent of all abortion procedures nationwide.”

According to ACN, 51% of Planned Parenthood facilities offer just the abortion pill, while the rest (49%) offer both chemical and surgical.

In 2017, the Guttmacher Institute reported that abortion drugs accounted for nearly 40% of the 862,320 total abortions reported in 2017. This reflects a total of 339,640 chemical abortions that year, over 930 per day. Today, abortion industry insiders are seeking to expand use of the abortion pill through self-managed and DIY abortion.

According to ACN, the abortion pill can legally be offered via telemedicine in 31 states and in Washington, D.C., however under the guise of the COVID-19 pandemic, the Biden-Harris administration’s FDA has temporarily allowed the abortion pill to be dispensed online by approved prescribers. As a result, there has been an explosion of online abortion pill dispensaries, with philosophies that better resemble back-alley abortion businesses than actual health care. Currently, there are no laws that specifically regulate virtual abortion pill dispensaries like brick-and-mortar abortion facilities, and women should be extremely cautious.

ACN reports, “Of the over 300 independent clinics operating in states where it is legal to deliver abortion care via telemedicine, at least 34 percent provide telemedicine abortion services: 23 percent are brick-and-mortar clinics and 11 percent are virtual clinics.” 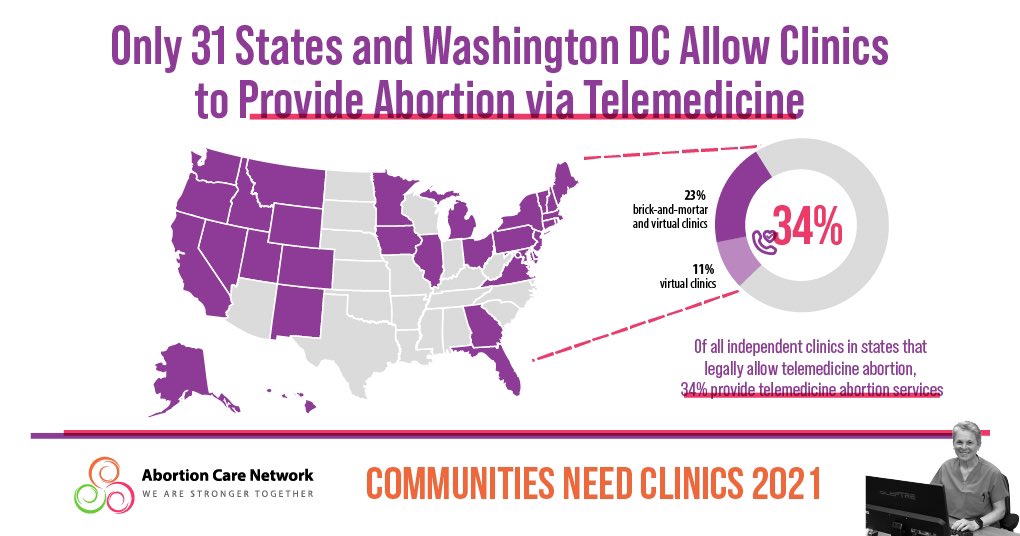 ACN itself is funded in part by the David and Lucile Packard Foundation, which gave a $14 million loan to help start abortion pill manufacturer Danco Laboratories years ago.

According to the ACN report, “independent” abortion facilities comprise:

Every day in America, an estimated 2,363 preborn babies are violently killed by abortion.

While we do not have abortion numbers for 2020 or 2021 yet, Guttmacher Institute data from 2017 revealed that nearly 2,100 preborn babies per day daily are killed in first trimester abortions. 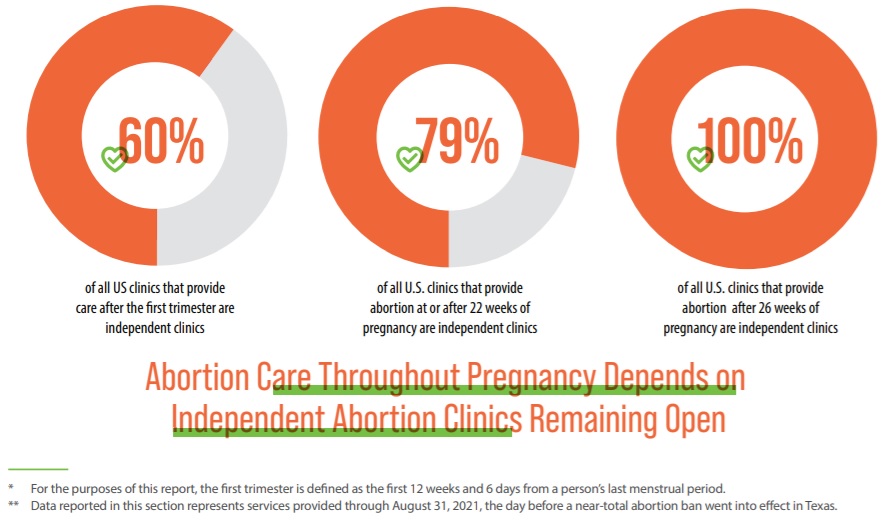 We also estimate that in 2017, 100,897 babies were aborted at 13 weeks gestation (11 weeks post-fertilization) and later (over 276 babies every single day).  Abortions are not broken down by the Centers for Disease Control and Prevention nor Guttmacher past 21 weeks, but they both acknowledge that late-term abortions committed at 21 weeks or later represent 1-1.3% of all reported abortions.

Using Guttmacher’s 1.3% figure, we estimate that 11,210 babies are aborted at 21 weeks gestation or later in one year, a total of nearly 31 babies every single day — more than the average Kindergarten classroom.