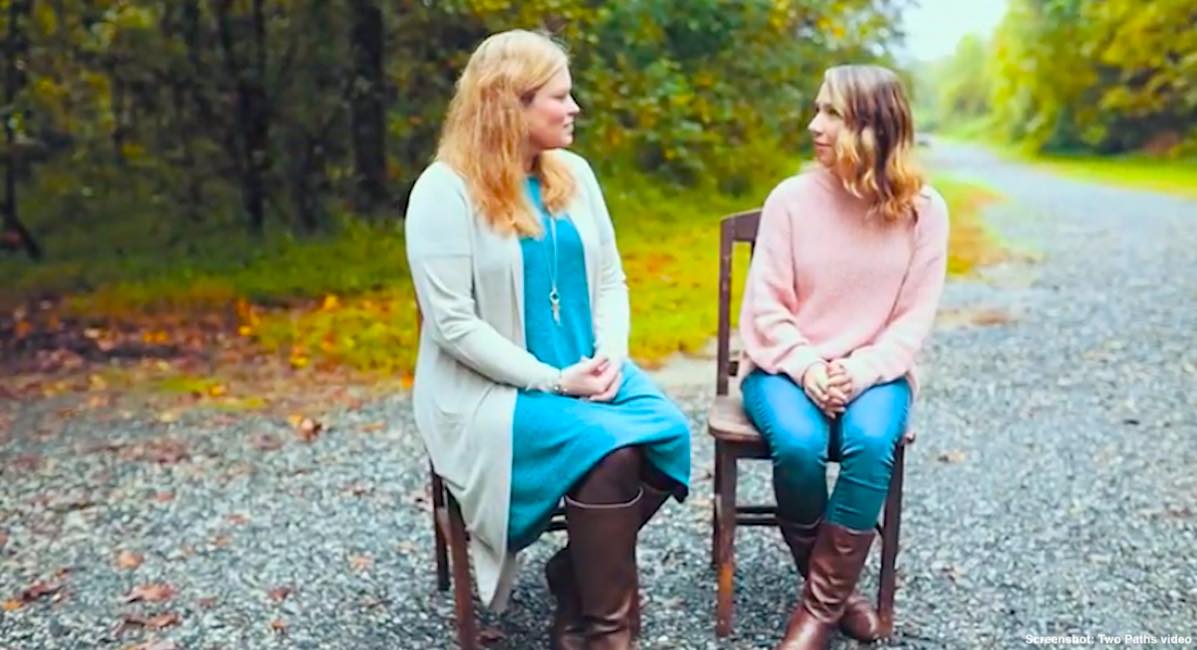 At a shadowy crossroads, two paths diverge. The roads ahead are unclear, but it’s obvious neither will be easy to tread. And the direction chosen will change everything, forever.

This was the situation for Tori Shaw and Leah Outten when they both got pregnant at age 16. Shaw chose abortion. Outten chose open adoption. In the video below, “Two Paths,” they share their stories.

Shaw and Outten grew up about 30 miles apart, though they didn’t meet until adulthood. As teens, both were excellent students, actively involved in their churches. Both are also from broken homes. “Looking back,” Outten told Live Action News, “I think that led me to … [look] for love and attention from the wrong sources in life.” Namely? “Boys.”

In spite of everything they had in common, their pregnancy experiences were very different. Shaw was rushed into abortion — the doctor who gave her the pregnancy test was scheduling the abortion moments after telling her the test was positive. Nobody in Shaw’s circle encouraged her to think things over.

Things were very different for Outten. She told Live Action News, “[My parents] encouraged me to make an informed, educated decision and took me to a counselor very early in my pregnancy” to aid in the decision. “I felt supported and loved both physically and emotionally.” She believes her support system is largely responsible for the difference between her story and Shaw’s.

Outten’s support system carried her through her pregnancy, helping her learn healthier coping skills that enabled her to process the complex feelings involved in placing her daughter for adoption.

Shaw, on the other hand, did not cope well. “Abortion seemed like the easy way out of a difficult situation, but it was far from it,” she recalled to Live Action News. “When I exited the abortion clinic, it was as if I wore a shroud of shame and condemnation that could not be removed. I never spoke of what I had done, never allowed myself to deal with the trauma, forced myself to smile when I wanted to cry, self-medicated with drugs and alcohol, and lived in fear that someone might find out who I really was.”

While there was no easy way out for either young woman, Outten’s path was characterized by joy, possibility, and hope, while Shaw’s was marred by shame, fear, and regret.

But Shaw’s and Outten’s paths have re-converged in a beautiful way — both are using their stories to reach out to other women experiencing unplanned pregnancies.

Shaw’s Not Forgotten Ministries is located in Winston-Salem, North Carolina, just one block from Planned Parenthood. In addition to sidewalk advocacy, “we also have a beautiful mentor program,” she said. The mentors pair with moms who choose life and “love them, pray for them, and befriend them.” Mentors, she said, “are the support system so many mothers need.” Not Forgotten Ministries provides each mentee with “baby showers, 3D ultrasounds, [and] professional maternity and newborn photos,” and will soon be able to offer free ultrasounds to all women entering the nearby abortion facility, Shaw told Live Action News.

However, says Shaw, “The heart of our ministry is post-abortive healing. It is our desire to help women (and men) with an abortion in their past find true healing in Jesus.” Not Forgotten offers Bible studies both in-person and via Zoom as well as weekend retreats. “I believe strongly that healed post-abortive people are the hidden key in the pro-life movement. If more of us will speak up, the tragic truth of abortion will be exposed,” she said.

Outten’s Woven Together ministry, located in Charlotte, North Carolina, “was created out of seeing many gaps in the adoption and pro-life communit[ies],” said Outten, “one being that in the pro-life communities, adoption is often shared as an option, but what happens after placement?” She added, “I find many birth moms … feeling regretful, coerced, and angry. That’s what I want to help avoid.” Outten told Live Action News she aims to help each expectant mom “make an informed decision and have support no matter what path she takes.” Woven Together is staffed by birth moms who assist and support pregnant women via phone and text before, during, and after the decision-making and placement process.

“We equip them with questions to vet any agency for ethics and make sure [they are] cared for long term,” said Outten. They also help each birth mom “know her rights and have her desires honored in the complexity of birth and placement. If a mom connected with us decides to parent, we love to cheer her on and have resources for her too!”

Both women have a desire to see the “Two Paths” video bring hope to women experiencing unplanned pregnancies. “I pray this video allows young women to see past the difficult moment they find themselves in,” said Shaw. “I hope it will cause people to better understand the impact abortion really has on women and cause the stereotypes about adoption to be shattered. I also desire for those with an abortion in their past to see what God can do when we are willing.”

Outten agreed. “I hope that young women will see that our choices today matter for a lifetime. I think Tori and I also wanted to undo some of the stigmas that birth mothers and post-abortive women don’t love their child[ren] or are trying to take the ‘easy’ way out — when there is not one easy way. Yet, some paths can have more positive results.”

“Seeing the final product has had a very positive impact on me. I am grateful we chose to create this video,” Shaw concluded. “God is using my tragic choice to help others make a different one.”