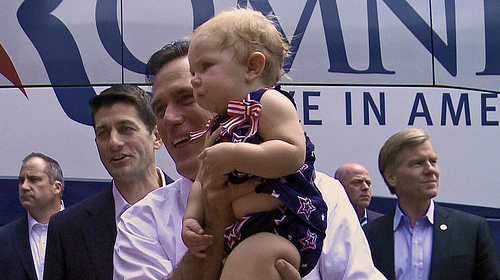 What does it really matter if we close the deficit but fill our graves and landfills with the bodies of our own dead children? 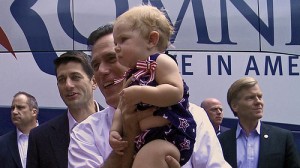 Romney with a baby girl. Photo credit: tvnewsbadge on Flickr

Last night, Denver, Colorado was the chosen location for the first 2012 Presidential Debate. Without a doubt, Colorado has become a major swing state in recent years. Colorado voters love to embrace independence and still embody the original spirit of the West. Speaking as a Colorado voter myself, many of us prefer action to rhetoric and greatly dislike being told whom to choose in any election.

A Colorado radio station – WNYC – made an important observation after last night’s debate: “In Colorado, campaigns talk economy while voters talk abortion.” Personally, as I watched the debate, I was disappointed that social issues were not covered by any of the moderator’s questions. Many Americans – and certainly Coloradans – believe that social issues are key to the candidates’ domestic policies.

Absent a couple of short statements by Romney, neither of the candidates went into any detail at all on abortion, religious liberty, or the various moral dilemmas presented by ObamaCare. In a portion of his arguments that contained pro-life values, Romney declared:

Second, in that line that says we are endowed by our Creator with our rights, I believe we must maintain our commitment to religious tolerance and freedom in this country. That statement also says that we are endowed by our Creator with the right to pursue happiness as we choose. I interpret that as, one, making sure that those people who are less fortunate and can’t care for themselves are cared by – by one another.

While those statements are a wonderful embodiment of pro-life values, they provide us with no detailed plans or opinions. Granted, neither Obama nor Romney was asked to detail any of his views on social issues, so we can simply hope that will come in a future debate. What I do know, however, is that I’m not the only Colorado – or American – voter disappointed about the lack of questions on social issues. WNYC reports:

Leading up to today’s first presidential debate, Colorado voters are getting barraged with campaign advertising. Most of it focuses on numbers – the unemployment rate, the size of the debt, and that now-notorious 47 percent.

But voters about talking about something else entirely: Abortion.

Colorado voters tell pollsters that jobs and balancing the budget are their top issues. But in conversations with voters this week in the key swing suburban counties outside Denver, many brought up abortion and women’s health without being prompted.

The radio station’s article goes on to detail different residents’ thoughts on government, abortion, Planned Parenthood, and the candidates. I particularly liked a quote from Vickie Collins, an Aurora woman. In explaining why she decided to vote for Romney, Collins states:

He wants to close down Planned Parenthood. I think that’s huge because a nation that kills its unborn is a nation that has lost its soul.

Despite all the statements, rhetoric, and campaign promises that would like to make us believe this election is about one thing – the economy – American voters know the truth. It’s not just our money that’s at stake. It’s our very lives. It’s the soul of our nation. It’s the heart of our people.

When abortion runs rampant and unchecked, our future workforce is put to death. It’s no surprise that the Americans currently paying into Social Security will almost certainly get nothing from it. When abortion is promoted and forced onto the states, our people die – both physically and psychologically. No one escapes the harm of abortion. Abortion deadens our souls and ices over our hearts.

This election, we must stand up and say what really matters the most. And it’s not the economy. It’s the lives of our children. What will we truly gain if we have the best financial system in the world but no children to pass it down to? What example are we setting for the world as we proclaim financial independence, but remain slaves to our selfish “convenience” and the “liberty” and “choices” that chain us to death?

What does it really matter, in the end, if we close the deficit but fill our graves and landfills with the bodies of our own dead children?