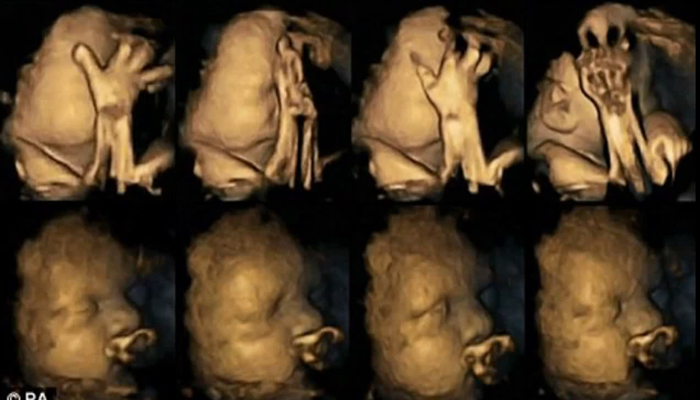 Powerful images of preborn babies in the womb who wince and grimace when their moms light up cigarettes are making headlines across the globe. The implications of these pictures reach beyond the harms of smoking during pregnancy; they show the undeniable reality of life in the womb.

Using moving 4D ultrasound scan images, Dr Nadja Reissland monitored babies in the womb at 24, 28, 32, and 36 weeks, and discovered that when mom lit up, baby winced.

The study “monitored 20 mothers attending the James Cook University Hospital in Middlesbrough, four of whom smoked an average of 14 cigarettes a day.” And the pictures are chilling. “The pilot study, which Dr. Reissland hopes to expand with a bigger sample, indicated that babies carried by smokers may have delayed development of the central nervous system.” Dr. Reissland also believes that these videos will help mothers quit smoking, as they see the differences in the development of their child in the womb. The report adds:

“Studies have shown that lighting up reduces sperm count, harms egg quality, hastens the menopause, and increases the dangers of premature birth and the need for caesarean sections… It also reduces the chances of a woman becoming pregnant because it undermines the ability of fertilised eggs to implant in the lining of the womb, according to research to be published today.”

The study’s co-author adds a powerful commentary that goes beyond the issue of smoking. Brian Francis of Lancaster University made the following statement:

“Technology means we can now see what was previously hidden, revealing how smoking affects the development of the foetus in ways we did not realise. This is yet further evidence of the negative effects of smoking in pregnancy.”

The images making headlines show the humanity of preborn child in the womb. It’s hardly a stretch to think if a baby reacts so powerfully to a drag of a cigarette, that he or she feels the excruciating pain of an abortion – either being systematically torn apart piece by piece, or ripped apart by the force of an aspiration abortion.

Researchers make a case for women to stop smoking while pregnant, but the study’s byproduct is even more evidence that babies are alive in the womb, and feel everything.