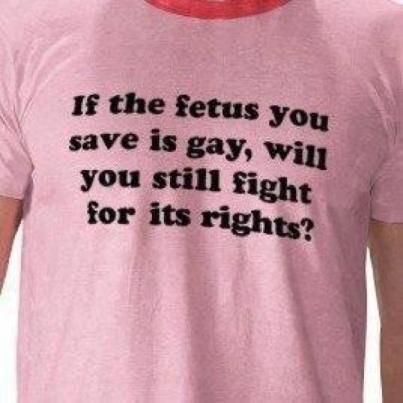 On the contrary, all the more reason for gay rights advocates to be pro-life.

The Facebook group Pro-Life vs. Pro-Choice Debate Forum recently posted the following image of a T-shirt asking, “If the fetus you save is gay, will you still fight for its rights?” 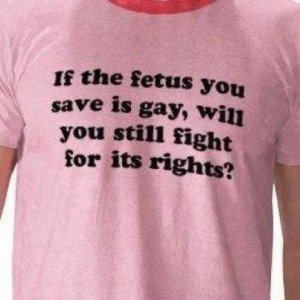 I’m sure the liberal activist who thought that one up feels mighty clever, as do many satisfied bumper-sticker shoppers. Unfortunately, though, the question is too clever for its own good, as thinking about it objectively for more than ten seconds not only serves to reinforce the pro-life position, but gives those genuinely concerned about gay rights a powerful incentive to oppose abortion.

The pro-lifer’s answer is easy: of course we will! The whole point of our movement is that every person is equally valuable and equally deserving of protection, and that being alive and human are the only proper criteria for deciding whether someone has rights. To suggest we’d throw that out the window when it comes to saving people we allegedly dislike is absurd. If pro-lifers were that heartless and shallow, then why would we be active at all, considering the babies pro-choicers have will likely be raised to also favor legal abortion? Aren’t the very people we want to save composed largely of future foes?

This talking point is entirely contingent upon another common left-wing smear: the idea that social conservatives and traditional Christians are homophobic. While a small fringe of anti-gay bigots sadly exists in this country, the vast majority of homophobia cries are instead referring to same-sex marriage opposition. But this is another demagogic attempt to stigmatize dissent from liberal orthodoxy. It’s not bigoted at all to believe that marriage offers something unique and necessary to children and society that would be impaired by redefining it.

And even among those who favor limiting marriage to monogamous man-woman unions, most of us – even those as uncompromisingly right-wing as Dr. James Dobson’s Focus on the Family – have no problem guaranteeing gay Americans’ actual rights, such as hospital visitation, joint property ownership, power of attorney, bereavement leave, etc. The suggestion that it would even occur to us to deny gays their right to life in the womb is unfathomable.

In fact, the prospect of identifying “gay genes” prenatally only reinforces the horror of abortion. First, doesn’t the mere possibility of fetuses even having characteristics like sexual orientation only underscore their humanity?

Second, it highlights some of the truly monstrous purposes abortion can serve. Just as with this summer’s sex-selection abortion debacle, the logic of abortion on demand necessarily entails a fundamental right to kill one’s child because he or she belongs to any given group of so-called “undesirables.” If abortion is inviolable “reproductive freedom,” and if fetuses have no rights, then weeding out the gay ones is just as permissible as aborting because your contraception failed. Gay-friendly abortion fans can finger-wave all they want at homophobic exercises of “choice,” but they have no logical consistency or moral high ground from which to stop them.

We do. So the next time you encounter someone looking to strut the rapier wit and moral self-righteousness he or she just got off a T-shirt, don’t let yourself get caught playing defense. Truth has nothing to fear.