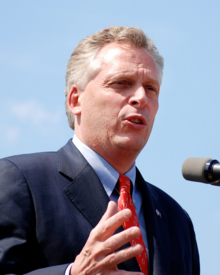 It was for this reason that, in 2011, a state law was passed requiring abortion facilities to operate with the same regulations and standards as ambulatory surgical centers. This would mean they would need to undergo renovations, like making hallways and doors wide enough for gurneys to fit through. Virginia Governor Terry McAuliffe (pictured right) was against this from the start, despite the fact that these standards were needed, and McAuliffe promised to be be a “brick wall” against any and all regulations or restrictions on abortion. Now, he is applauding the Virginia Board of Health, for officially scrapping the building code regulations for abortion clinics permanently.

Monday, the board decided that the regulations should not apply to any of Virginia’s abortion mills in an 11-4 vote, and agreed with a June U.S. Supreme Court ruling that they were unconstitutional. McAuliffe released a statement celebrating the decision.

“I want to thank the Virginia Board of Health for working to repeal onerous regulations designed solely to reduce or outright remove access to essential reproductive health services for women across the Commonwealth,” McAuliffe wrote. “This vote demonstrates to the rest of the United States and the world that Virginia is a community where people can live, find employment, and start a family without politicians interfering with decisions that should be made by women and their doctors.”

The Board of Health originally wanted to merely grandfather existing clinics, a decision they reversed after then-Attorney General Ken Cucinelli told the board that they could be held personally liable, and that his office would not defend them if they did not back the regulations. But after McAuliffe was elected governor, he replaced the existing members of the board, apparently with people who were willing to put pro-abortion activism before women’s health and safety.

This is a devastating decision for the women of Virginia. These regulations were put into place in response to a wave of inspections across the state, in which every single clinic inspected was found to have major violations. Among the nine clinics inspected, there were 80 violations. Employees didn’t know which instruments were clean and which had been used, and they weren’t being properly vetted or trained. Drugs kept in the clinic were expired, and one clinic even had a freezer with blood that had spilled out and frozen, along with the frozen remains of aborted babies.

Most disturbingly, these were the conditions found when the abortion staffers knew about the inspections beforehand. They knew state inspectors were coming, and this was what they felt was acceptable, inspection-worthy condition. If this is how disgusting it was for a planned inspection, then how disgusting must the conditions be on a regular basis when they know no one is looking?

The Virginia Board of Health just decided it’s more important to ensure that abortionists can continue to kill preborn babies and maim women than it is to keep women safe.