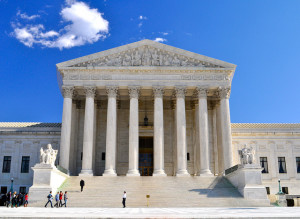 The U.S. Supreme Court will be hearing a case on the constitutionality of a buffer zone in front of abortion clinics. (Photo Credit: TexasGOPVote.com on Flickr)

A Massachusetts law enacted November 13, 2007 that created a 35-foot buffer zone around abortion facilities will be examined for constitutionality by the Supreme Court of the United States.  According to the initial complaint filed in early 2008, the Act is to “preserve public safety by creating clearly defined boundaries to improve the ability of safety officials to protect the public,” but the effect of the law is to limit pro-life advocates.

Penalties for breaking the law range from up to $500 in fines and three months in jail for first-time offenders and up to $5,000 in fines and 2.5 years in jail for subsequent violations. The law applies to the area outside abortion clinics, not hospitals that perform abortions.

Alliance Defending Freedom Attorney Michael DePrimo, lead counsel on the case, believes that this is a clear violation of the First Amendment:

Pro-life advocates shouldn’t be penalized for expressing their beliefs…. The buffer law is breathtaking in its scope.  It obviously was designed and intended to squelch pro-life speech, but it prohibits much more, such as labor picketing and charitable solicitations.  The First Amendment simply does not permit such outlandish restrictions on peaceful speech.

Throughout the last few years, the District Court and the First Circuit Court of Appeals have upheld the Massachusetts law. The U.S. Supreme Court decided last week that it will hear the case. The petition for certiorari (request that the Court hear the case) explains that the petitioners (those bringing the lawsuit) want to peacefully help those considering abortion:

Petitioners are individuals who believe that women often have abortions because they feel pressured, alone, unloved, and out of options. Petitioners try to position themselves near clinics in an attempt to reach this unique audience, at a unique moment, to offer support, information, and practical assistance. They are peaceful, non-confrontational, and do not obstruct access. Yet, the State prohibits them from entering or standing on large portions of the public sidewalk to proffer leaf- lets or seek to begin conversations with willing listeners.

Attorney DePrimo is convinced that the U.S. Supreme Court will ultimately find this law unconstitutional:

This buffer zone was designed to censor constitutionally protected speech. We are confident the Supreme Court will strike down the law that created the zone so that our clients and other peaceful pro-life citizens can once again freely share their message.