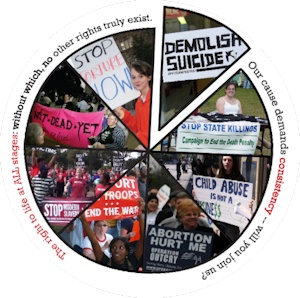 On March 29, 2014 (next Saturday) the first ever Life/Peace/Justice conference will be held at Villanova University in Philadelphia. This conference will feature antiabortion speakers as well as speakers on other life issues such as euthanasia and the death penalty.  Aimee Murphy, executive director of Life Matters Journal, which is sponsoring the conference, was kind enough to give an interview and talk a little bit about the upcoming event.

What inspired you to organize the Life/Peace/Justice Conference?

Murphy: There were a lot of different factors at play when I finally decided to take the leap and start the planning for Life/Peace/Justice. The seed of the idea had been planted back when I was in undergrad at Carnegie Mellon. Our pro-life group had a consistent life ethic woven into its constitution, and we had taken the opportunity to start more conversations about the hard issues with our student peers. I wanted to do the conference back in 2010, but we just didn’t have the resources. So I kept it in the back of my mind, retaining the hope that someday we’d have the resources and the opportunity to present a conference on a whole range of life issues.

One of the greatest reasons why I founded Life Matters Journal in 2011 was because I wanted to promote pro-life unity, in addition to opening up a dialogue and forum about the range of consistent life issues. I was so sick and tired of infighting, but also of having peers in pro-life work feel unwanted or unwelcome due to their political party or religious beliefs: I’d had a small handful of college peers leave the pro-life group not because of our mission or our work at Carnegie Mellon, but because they’d attended pro-life events and conferences with us and felt tragically scorned by the speakers. We had LGBT members of our group leave because the pro-choice side was accepting of them, because they weren’t told they’d “go to Hell” because of their inclinations at Planned Parenthood rallies. We had atheist and agnostic members of our group become inactive because pro-choicers don’t care what religion you are: they only care that you support the “right” to abortion. I saw good students, good people, feel unsafe in their own skin at pro-life events. I saw them feel unwelcome and unwanted. I heard stringent religious pro-lifers shout at them that “You can’t be atheist and pro-life!” So sometimes, these non-traditional pro-lifers just stopped being actively pro-life.

I want Life/Peace/Justice to be a safe space for discussion, forum, and even disagreement. Our group is non-sectarian and non-partisan because we want to make sure that people of every stripe – from Atheist to Buddhist to Catholic to Protestant, from straight or LGBT to Democrat or Republican – know that they are welcome in the discourse, are welcome in our efforts to ensure that every human being’s life is respected, valued, and protected.

The other major factor at play in founding Life/Peace/Justice was, of course, the breadth and depth of issues that we want to cover in the sessions. I firmly believe that both sides of the political spectrum suffer from a two-faced ethical theory that is more of a “choose who you like and pat yourself on the back for supporting “human rights”” kind of philosophy. This exclusivist mindset does not really honor the human person, but chooses who is valuable at what point, for what reason. If we truly claimed to respect human rights and desire the good of humanity, we would be consistent in our defense of human life and would not neglect any human being at any point from our consideration and protection. So our sessions cover abortion, the death penalty, war, suicide prevention, euthanasia, embryonic stem-cell research, non-violent action, and more. Our hope is to draw connections between cases of violence, to draw out this ethic based in shared humanity – not any sort of circumstance like size, age, innocence, ability, sexuality, religion, or beliefs. I look forward to this opportunity to share our vision for unity in the work for human rights for all human beings.

Can you tell us a little bit about some of the speakers and their presentations?

Murphy: Our speakers are some of the most acclaimed pro-life and pro-peace speakers in the country, and we’re so grateful for their sacrifice to make L/P/J possible!

Abby Johnson (author of unPLANNED & founder of And Then There Were None) will be presenting in the morning general session on her journey to being pro-every-life. Abby has recently announced that she is a supporter of Consistent Life and the ethic that this group espouses. She will be telling her story of her experience of going from a Planned Parenthood clinic worker (and director!) to a pro-life advocate and a proponent of the consistent life ethic.

Jason Jones (founder of I Am Whole Life, Movie to Movement & producer of the pro-life films Bella & Crescendo) will be presenting on three different occasions at L/P/J. The first will be in the morning general session in junction with Mary Meehan (of the Human Life Review) and Kristen Day (president of Democrats for Life) on the subject of being consistent in light of the political sphere. I’m sure that will be a rousing discussion! He will also be presenting on solidarity and subsidiarity in afternoon breakout session 2, and on a pro-life case against drone warfare in afternoon breakout session 3.

Kirk Bloodsworth (death row exoneree & speaker with Witness to Innocence) will be speaking in afternoon breakout session 4 on his experience through being sentenced to capital punishment and his years in prison, followed by his exoneration by DNA evidence and eventual release. He’ll be speaking on the death penalty and his work for its abolition as well.

We’ll have sessions for examining Christian ethics relating to the whole spectrum of life issues featuring Shane Claiborne (The Simple Way), Rev. Patrick Mahoney (Christian Defense Coalition), and Rob Arner (Consistent Life); as well as a session entitled, “Reaching a Changing Young Culture for Life”, featuring Kelsey Hazzard of Secular Pro-Life, Cecilia Brown of PLAGAL (the Pro-Life Alliance of Gays & Lesbians), Kristine Kruszelnicki (Pro-Life Humanists), and April Casey (I Stand for Life) to discuss inclusion of non-traditional pro-lifers in the movement. I’m also very excited to hear a presentation from Carol Crossed (Feminists for Nonviolent Choices, The Susan B. Anthony Birthplace Museum) entitled “Feminism’s History of Nonviolence”, which will discuss the consistent life ethic in light of feminist thinking (or vice versa), and feminism’s pro-life legacy. To see more of our schedule, check it out on our website: http://www.lifepeacejustice.org/schedule.

How do you think the conference will benefit individual pro-lifers? And the pro-life movement as a whole?

Murphy: Life/Peace/Justice Conference will be a groundbreaking event that I hope will benefit both the individuals attending as well as the larger pro-life and pro-peace movements as a whole. For individuals, L/P/J will offer great educational opportunities, training, activism (including abortion clinic outreach and peaceful presence, and a peace vigil in the evening), and an opportunity to engage in a forum about the most salient issues that face us in our work. More than anything, though, I think it will offer an unmatched chance to be an agent for unity in the movement by engaging actively with other individuals who are dedicated to peace and life, no matter the background or circumstances from which each comes.

For the pro-life movement as a whole, I firmly believe that Life/Peace/Justice offers a starting (or continuation) point to welcome non-traditional pro-lifers to the movement. I think it’s important to note this analogy: I would not, if I were a fireman, line up every other fireman before entering a burning building to save the lives of those inside to perform an ethical and political or religious ideology checklist to ensure that only those who met my standards of goodness were allowed to work to save lives. That is what we are doing – we are working to save lives – and to deny any person from doing this good and necessary work (whether actively or through shaming) is not only counter-intuitive but also counterproductive. And I think that a gathering like L/P/J can work to bridge the gap that has been left due to years of pro-life infighting.

In addition, L/P/J not only engages non-traditional pro-lifers, but also the “fringe issues” which can offer a starting point of conversation and discourse for those individuals who might be tempted to write off the pro-life cause as one only for “rich white straight Republican out-of-touch men”. This event presents perspectives that are unexpected, and I think we have the chance to address other issues of life – like war and capital punishment – and through our ethical perspectives on life, open up discourse to plant seeds and change hearts and minds on all issues of human rights and human life.

All pro-lifers, regardless of their political affiliation and ideology, are welcome to attend the Life/Peace/Justice conference. To sign up, http://lifepeacejustice.org. There is still time to register ahead of time, and there will also be registration at the door.