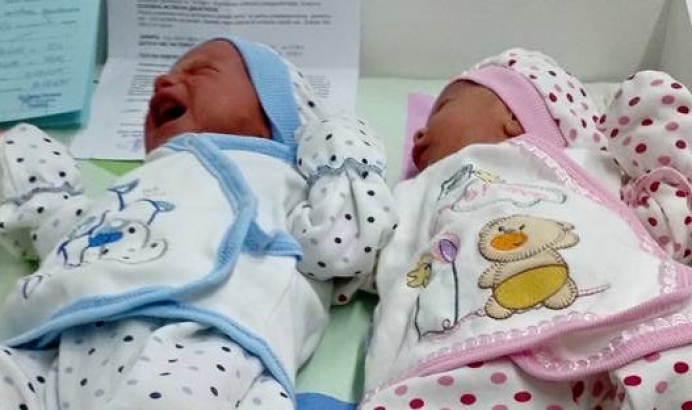 (Pregnancy Help News) In November 2014, Milena* arrived at the hospital in Štip, Macedonia, seeking an abortion. She was 40 years old, married with two children, and now, pregnant with twins. She was afraid, unable to see how she could care for two more children at her age.

In another time in Macedonia, the conclusion to Milena’s story could easily have been abortion. Years of largely permissive abortion laws, a troubled economy, and an increasingly small average family size certainly may have produced that outcome.

But, a recently enacted law requiring counseling prior to an abortion positioned Daniela, a counselor from Macedonia’s first pregnancy center, to help Milena.

Daniela was there to meet Milena the day she arrived at the hospital for an abortion. She opened Milena’s eyes to assistance that was available to her—private and public alike. Not only does Daniela’s pregnancy center, “Lydia: A Beating Heart,” provide private assistance in the form of clothes, diapers and other material resources, the Macedonian government provides public assistance for having a third child.

Milena became overjoyed at the idea that she might be able to keep her babies. She told Daniela, “I have been praying that somehow God would stop me from having an abortion!”

As Daniela recalled, Milena left the hospital crying and hugging everyone in sight. Seven months later, Milena and her husband welcomed the twin babies, a boy and a girl, into the world.

An Opening through to the Crisis of Population Decline
In a small Balkan state where the norm is to have no more than two children, the prospect of four children is rare. According to the World Bank, Macedonia’s fertility rate hovers at 1.5.

The Independent Balkan News Agency reports that since 1948, the number of babies born among the Slav Macedonian community has dropped by 50 percent. In response to the population decline, the government pays a monthly sum of 135 Euros for 15 years for families who have a third child.

As the government seeks ways to respond to its population decline, it is simultaneously enacting stronger regulations of abortions.

Up until one year prior to Milena’s visit to Lydia in late 2014, Macedonian abortion law still followed that of the former socialist Yugoslav Republic of Macedonia, which allowed abortion for any reason during the first 10 weeks of pregnancy. After 10 weeks, the law required the approval of three doctors or social workers.

In 2013, the Macedonian government introduced new legal protections for unborn children and their parents. A woman seeking an abortion prior to 12 weeks gestation is required to wait 72 hours, have an ultrasound, and attend at least one counseling session.

A year prior, Heartbeat International had sent a two-person team of Ministry Services Director Betty McDowell and International Coordinator Molly Hoepfner to Serbia to help train volunteer and staff counselors from Macedonia, Serbia and three other former Yugoslav nations, sparking a relationship that has continued to grow.

The counseling requirement prompted the Štip Hospital to invite Lydia to provide counseling at their location. According to Amanda Peck, a volunteer nurse with Lydia, her pregnancy center’s clientele reflects Macedonia’s family demographics and changing public.

“A typical client here is married, already has two or three kids, and either she or her husband or both don’t want any more kids,” Peck said. “Culturally, the norm is to stop after two kids, yet birth control within marriage is pretty much non-existent for a variety of reasons, some of them unclear. Most of our success stories are babies who are the third, fourth, fifth, or even sixth child in their family.”

About a year ago, another couple came to Lydia’s office in Skopje seeking an abortion. With four children at home, including a set of twins, another pair of babies seemed too much to bear. If four children is rare, six is almost unheard of in Macedonia.

The night before their visit, the couple had seen the director of Lydia on a national television program, discussing the pregnancy center’s work. Misunderstanding the mission of the center, the couple set out the next day for a meeting at Lydia, hoping for assistance with an abortion.

Irina, the counselor at the center, clarified the organization’s mission. She shared with the couple the value of human life, the risks of abortion, and the assistance available to growing families. By the time the couple left, Irina was discouraged, not sure whether the couple would still have the abortion.

Two days later, the center received a call. The couple had decided not to have the abortion. Six months later, baby girls Jana* and Ilina* were born.

“While talking with the women who come to the hospital for an abortion, I have an opportunity to hear, to understand and sympathize with them in this whole mess of thoughts and emotions,” Daniela, Lydia’s counselor, said. “This is a real opportunity to demonstrate God’s unconditional love for them, a love that embraces without condemnation or rejection… By saving the little unborn babies, we also save their mothers and families from the devastating effects of abortion.”

As Macedonia tightens its public policy on abortion, Lydia continues to respond to the women who may otherwise have an abortion, providing resources and information to growing families.

“Every mom who chooses life for her child in my eyes is a hero,” says Alexandra, another volunteer with Lydia. “I hope and pray that God will continue use Lydia to change the mindset of our nation about abortion and that they will start to see their children as a blessing and a gift from God.”