While Twitter continues to refuse Live Action to purchase ads on its social media platform, the company is permitting Planned Parenthood and abortion supporters Alyssa Milano and ReproAction to purchase tens of thousands of dollars worth of advertisements to promote abortion and oppose pro-life legislation.

Twitter’s reasoning for blocking Live Action’s pro-life message? According to Live Action president and founder Lila Rose, the company “said that our content violated its sensitive advertising content policy, which prohibits ‘inflammatory or provocative content which is likely to evoke a strong negative reaction’….” The inflammatory content “include[d] pictures of children developing in the womb and even simple ultrasound images of babies — like the ones that expectant parents hang on their refrigerator doors….”

In addition, Rose said, “because many of our tweets link back to Live Action’s website, Twitter requires us to scrub our website of similar content before it will allow us to promote our tweets again. In other words, Twitter wants Live Action to scrub almost all of its pro-life messaging.” In 2017, Live Action released its emails exchanges with Twitter. 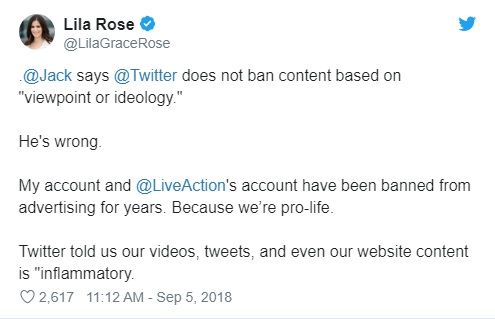 Despite requiring a scrub of Live Action’s Twitter account and website before being permitted to promote pro-life Tweets, there is no such requirement on Planned Parenthood and other abortion groups. Searches conducted by Live Action News on Twitter’s Ad Transparency page reveal that Planned Parenthood (PPFA) has recently purchased over $120,000 in Twitter advertisements. Planned Parenthood Action (PPACT), the group’s political arm, has spent over $11,000 in promoted tweets on the social site. Both accounts are heavily promoting opposition to the new HHS rule on TitleX funding that would restrict taxpayer dollars from being sent to abortion facilities. Supporters of the change argue that poor and low-income men and women should not be forced to visit abortion facilities in order to access health care, nor should taxpayer dollars be used to prop up abortion facilities. Yet that’s what has been happening, as this video explains. 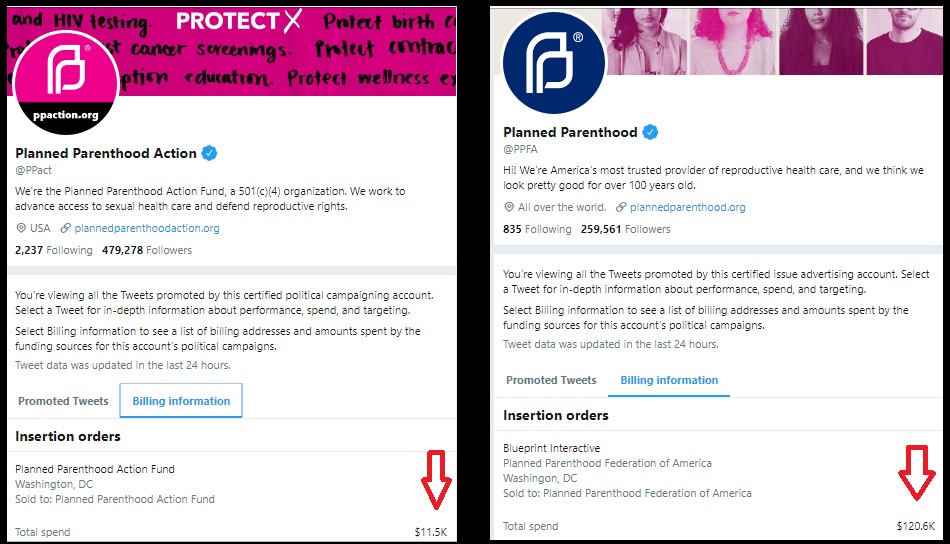 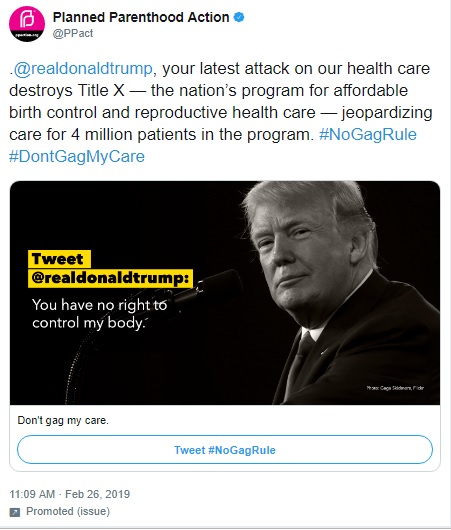 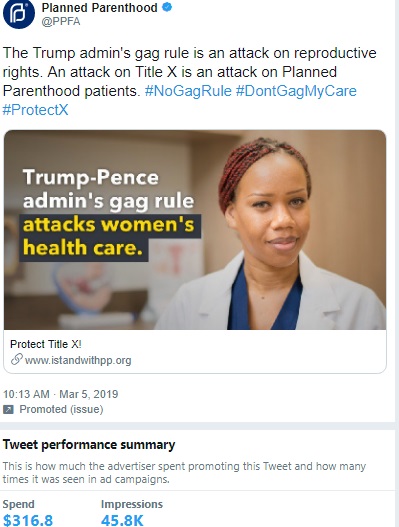 In a separate promotion, PPFA featured its Chief Medical Officer, Raegan McDonald-Mosley, MD — now a Medical Director of a Planned Parenthood in Maryland. Mosley is one of the abortion corporation’s few staff remaining who was with the corporation during the Center for Medical Progress’s undercover video releases. Other employees there have since quit or been reassigned. 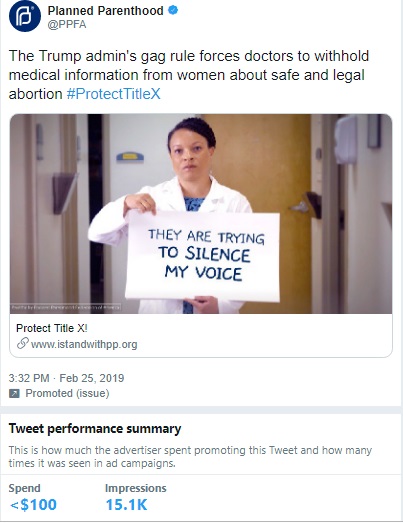 In addition to Planned Parenthood, the radical pro-abortion group ReproAction also purchased over $4,000 in ads to promote a push for self-managed abortion — something unapproved by the FDA, which currently warns women against self-managed abortions. The group’s ads, in bold letters, state, “Stop Prosecuting Abortion,” and the text claims, “Women who self-manage their own abortions are already facing punishment of up to 20 years in prison.” The FDA recently sent warning letters to groups illegally “facilitating the sale of unapproved mifepristone and misoprostol [abortion pills] to consumers in the U.S.” The FDA warns consumers “not [to] buy Mifeprex over the Internet because you will bypass important safeguards designed to protect your health (and the health of others).” 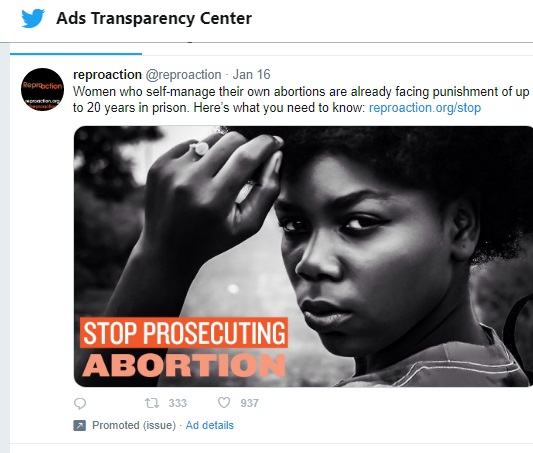 Actress Alyssa Milano has also been purchasing Twitter ads for a host of issues, including her agenda to derail the pro-life heartbeat bill in Georgia. While Twitter does not publish billing details on individual ads, Live Action News discovered that in just the past several days, Twitter has allowed Milano to promote 18 tweets advocating abortion rights or organizing a boycott of the State of Georgia to pressure the governor to withdraw his support of the HB481 Heartbeat Bill.

Twitter was founded by Jack Dorsey and Evan (EV) Williams who left his position on Twitter’s board in February 2019 to become CEO of Medium. Dorsey has openly supported abortion, taking part in the Trust Women Silver Ribbon campaign by wearing the “Trust Women” pin. The campaign partners with several pro-abortion organizations including Planned Parenthood.

While Twitter allows an avalanche of advertisements from abortion supporters like Planned Parenthood and others, pro-life groups have recently claimed that the social media site is censoring their material by allegedly locking accounts, rolling back followers, or restricting advertising. Live Action, in the meantime, continues to call out Twitter for this obvious double standard.