UPDATE, 4/01/19: The followers issue was resolved, and National Review’s Alexandra Desanctis obtained more information on the recent Twitter activities, and shared the info on her Twitter account:

Update: @Twitter tells me that the issues with @UnplannedMovie’s follower count are due to the earlier suspension. Follower counts of suspended users can take about 24 hours to stabilize. I’m told the issue with following/unfollowing is related and should be resolved soon.

UPDATE, 3/31/19: Some Twitter users — including Live Action — have noticed that they have been removed as followers of the Unplanned movie page, not by their own choice. Some users are also having difficulty even following the page. And Then There Were None wrote, “It refuses to allow us to keep following it. The number of followers keeps changing even though we KNOW it reached 100k earlier today, and if you refresh the feed it unfollows for you.” At this time, it is unknown if this is a glitch or something more.

What the heck @jack – Just tried this and @liveaction is right – some crazy suppressing is going on with @UnplannedMovie – wassup? Video in next tweet. 1/2 https://t.co/mqG7CuIs5M

Kept reading the tweets about people following @UnplannedMovie – then immediately checking and seeing they are no longer following. Tried for myself, same experience multiple times. What’s the explanation? @jack

People are once again experiencing @Twitter shenanigans…
We finally got a response as to our suspension.#Unplanned#Unplanned reactionhttps://t.co/KgMJ8mdpVK pic.twitter.com/jFAqf3xMRM

UPDATE, 3/30/19, 5:56pm EST: According to Townhall.com, the movie’s creators have claimed that several people had “maliciously and falsely” reported the Unplanned movie’s account to Twitter and got it suspended… with an unexpected result:

We would like to thank the people who maliciously and falsely reported UnplannedMovie to @Twitter.
Notice followers before and after.
Your move… #unplannedreaction pic.twitter.com/dHZ7Xxz8u5

3/30/19: The Twitter page for the new movie about a former Planned Parenthood director’s pro-life conversion, Unplanned, was inexplicably suspended sometime on Saturday morning, the opening weekend for the film. The page was not visible, with an “account suspended” notice, for an unspecified amount of time. 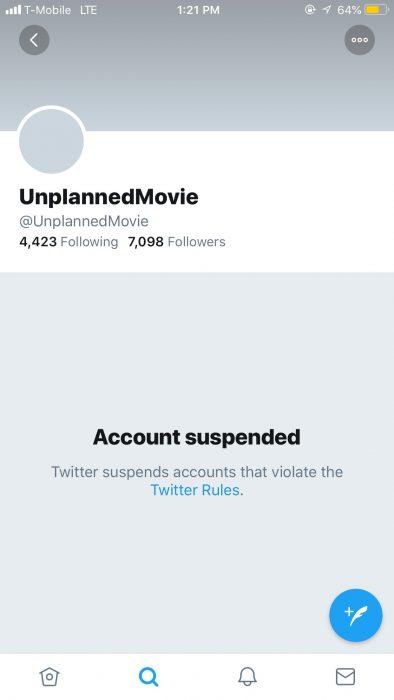 When asked by Live Action about the reasons for the suspension, a member of the movie’s cast replied, “No response. Team has put in a request and appealed.”

The Unplanned movie was officially released in theaters yesterday, and the movie currently has a 91% audience positivity rating on Rotten Tomatoes, out of 645 reviews at the time of this posting. 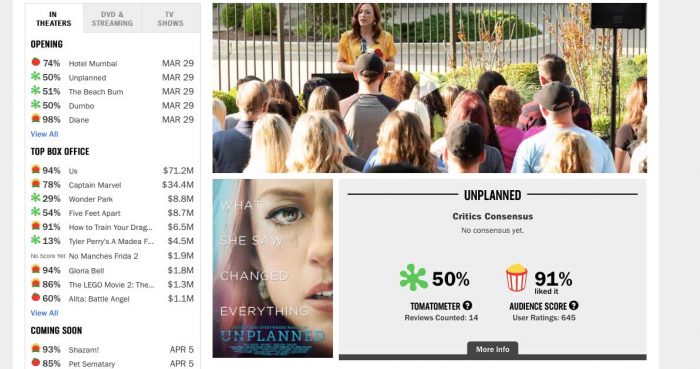 The film has faced significant challenges due to the fact that it is a film about abortion — not just any abortion film, a pro-life film which shows one woman’s personal account of the reality of abortion. This message is, of course, an unpopular viewpoint with Hollywood in general. The Blaze reported this week that the film was denied rights to various music from Disney, Sony, Universal, and Round Hill Music. In addition, TV networks are refusing to run ads for the movie. And the film is the first release from Pure Flix to receive an R rating.

Within hours, thankfully, the Unplanned movie account was restored, with the group tweeting the message below:

Thank you everyone for your support in letting @Jack & @Twitter know when our Unplanned Movie account was recently suspended without cause.
We are back and excited for the great response we’re getting in theaters this weekend.#grateful https://t.co/vTmhqoXIWm

But Twitter itself also has a track record of censoring the pro-life message. Twitter has barred Live Action from advertising on the platform for years, even insisting that in order to be allowed to advertise there, pro-life content such as ultrasound photos would need to be removed not just from Live Action’s Twitter account, but from Live Action’s own website. But Twitter has allowed Planned Parenthood and other pro-abortion groups to run their ads on the platform. Facebook is no different, also routinely censoring pro-life groups’ messages.

We have been BANNED from advertising simply because we are forwarding the pro-life message.

This does not change the fact that social media giants are becoming increasingly hostile to the message of pro-life groups. This deserves an explanation.