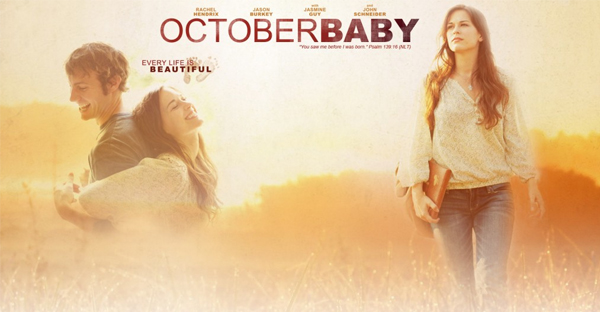 You have a voice. Let’s hear it.

If a picture’s worth a thousand words, what can a film potentially communicate? That’s a question I’ve pondered while witnessing the impact pro-life films are having on our society.

Let’s take the movie October Baby for example. The film is based on the story of abortion survivor Gianna Jensen. The plot is centered on a college student who finds out she was adopted after surviving a botched abortion. She then goes on a journey to find answers. The movie delivers a strong pro-life message focused on forgiveness and hope.

Although October Baby played on just 390 screens, it finished in the top 10 for its debut weekend. The production budget for the film was around $800,000, but it grossed $5,357,328 at the box office. The movie came out on DVD on Sept 11 and was No.1 on the Soundscan ranking for Christian films. I was surprised to walk into my local Walmart and see a poster for the movie in their store. I later found out that Walmart was putting up poster stands and selling the DVD throughout its stores.

October Baby had its television premiere, on Oct. 14, with three showings on the GMC network. While many viewers were outraged over the cutting of a pivotal scene in the film, the movie still touched people deeply. Pattie Mallette (Justin Bieber’s mom) tweeted this message to her over 1.4 million followers on Twitter:

Just watched October Baby. Wow. What an incredible movie! Its a must see!! Why doesn’t everyone know about this movie!??? #OctoberBaby

Pattie’s recent book, Nowhere But Up: The story of Justin Beiber’s mom, reveals her brave decision to keep her son rather than abort him. Her tweet about October Baby was retweeted 569 times and favorited 329 times. Some of her followers responded by telling her they’d never heard of the movie but would be sure to watch it now. What if 500 people watched that movie and changed their opinions on abortion? With pro-life movies and the popularity of social media, it’s easy for millions of people to access life-affirming messages. October Baby is being re-edited and will re-air this Sunday, Oct 21, at 11 a.m. ET and 12 a.m. ET. Share it with friends on Facebook, on Twitter, or through e-mail. Those who may reject listening to your views on abortion might be interested in watching a compelling movie. We should use every tool we can to touch hearts and change minds.

I just recently celebrated my 31st birthday with a house full of family and friends. At the end of the night, one of the kids wanted to watch a movie. I don’t own many kids movies, but I do have a copy of Dr.Seuss’s Horton Hears a Who. Horton is an elephant with big ears who can hear the voices of little Whos who live on a tiny flower. In the movie, Horton fights to keep the Whos alive from those who can’t hear them and want to destroy them. The theme of the movie is “A person’s a person, no matter how small.” Although the author of the book, Theodor Seuss Geisel, was a Planned Parenthood supporter, many in the pro-life community have used that film to relay the message of protecting life.

Pro-life cinematography is powerful because it uses the medium of film to touch the emotions of our hearts. The 2006 film Bella is a great example of this. LifeSiteNews reports that crisis pregnancy centers are using this movie to help save lives. In June 2012, there were 445 reports of lives saved because parent’s watched the film. LifeSiteNews shares this personal testimony:

Abortion minded 16-year-old Anna (name changed) received counseling over the phone from one center. She was sent a packet which included Bella. Soon afterwards, Anna called the center back saying, “Bella is the best movie I have ever seen! It helped me decide to keep my baby.

What about you? Are you a budding cinematographer, actor, scriptwriter, or producer? Do you have an inspiring story or movie idea? If so, don’t be afraid to share what you have. With only a camera and a YouTube account, it’s easy to let your voice be heard. If even one person view’s your film, it’s worth it. Your movie could help save a life.

I’ll leave you with a moving three-minute video produced by Students for Life. They flew me to Washington, D.C. earlier this year for my acting debut. The video is a thank-you to everyone involved in the pro-life movement. It’s a reminder that we’re making progress. Enjoy and share!