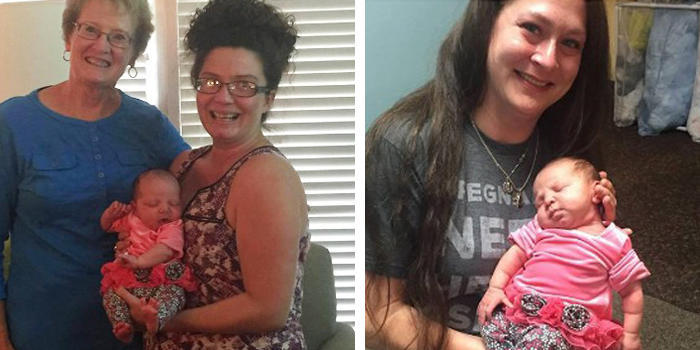 (Sidewalk Advocates for Life) Recently, Susan O’Neill, our new Northern Program Coordinator, was visiting one of our locations in Michigan. Because her words are so powerful, I am going to allow Susan to share her experience with you…

“During our stellar morning at (the abortion facility) with the SAFL-Grand Rapids team, we witnessed a save! The advocate even got to go back and see the ultrasound that confirmed a 13-week pregnancy …the mom chose life! Things couldn’t get much better, right? Well, they did!

“We were told that a surprise visitor was coming to see one of the Sidewalk Advocates at the pregnancy resource center where we were holding the training that night.” “Everyone knew the secret except for the advocate, Edna. A mother who Edna had helped choose life over the winter had just given birth to a baby girl ten days earlier. This mother was coming to surprise Edna and introduce her to the baby that she had helped — with God’s grace — to save!

“Mom arrived with her bundle of joy, and the most beautiful reunion I have ever witnessed ensued. She told us how she had been a struggling single parent, already having two children and feeling completely unprepared to parent the third. She said she purposefully parked down the street to try and avoid Edna, whom she had seen out in front of the (abortion facility) many times previously.” “It was the middle of winter and snow was everywhere. There was dedicated Edna; all Mom could see was Edna’s eyes through the fuzzy hood of her jacket. Mom even said she was talking to her friend on the phone who was still sitting in the car so she could avoid a conversation with Edna as she walked by into the (abortion facility). Our advocate was still undeterred and called out, offering help.”

“Something stirred mom’s heart and she couldn’t ignore Edna. They ended up having lunch together that very day and the rest as they say, is history! Mom went to the PRC; she was blown away by the caring people and saw her baby on an ultrasound. She chose life and said that Edna saved them BOTH!” “Mom said that her baby is perfect and her big brother and sister love her. Mom told me that she wants to become a pro-life advocate some day …You already are mom, you already are!

“Holding that baby was one of the most holy experiences I have ever known.” We wish we could put into words how precious these pictures are — but they speak for themselves, don’t they?

Our hearts are overflowing with JOY: THANK YOU, LORD, for letting us be a part of what you are doing to spread your love and end abortion!

THANK YOU to all of you who sacrifice, donate and pray in support of this mission — God continues to answer us with abundant blessings! We appreciate you more than we can put into words!

Editor’s note: This article originally appeared at Sidewalk Advocates for Life, and is reprinted here with permission.