This is a clip from an episode of Life Report called “Does the Bible’s Silence Justify Abortion?“ In this clip, I asked Scott Klusendorf from Life Training Institute to summarize his article on the same topic published by the Christian Research Institute.

Scott answered by offering the best syllogism pro-life people can use if they want to make a biblical argument for the pro-life position, and he also explained why we shouldn’t use Psalm 139 and Jeremiah 1:5 instead.

If you don’t want to watch the 5-minute video, you can read the full transcript below the jump. 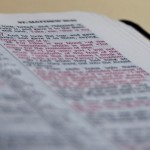 Scott Klusendorf: Well, it’s in response to the so-called pro-choice argument from Scripture that goes like this: Premise 1 – the Bible does not mention the word “abortion.” Premise 2 – the Bible nowhere teaches that the unborn are human. Conclusion: Therefore, elective abortion is a matter of personal choice. Where the Bible speaks, Christians should speak, where it doesn’t speak, we should be silent. And because the Bible is silent on abortion, therefore we should not be saying that elective abortion is wrong. That’s the argument that’s given.

So let’s be clear about the type of argument that’s being advanced here. This is called an argument from silence. An argument from silence is not always fallacious but almost always fallacious. Very rarely does it work, and in this case, it clearly does not work. And when someone says to me, “The Bible is silent on abortion, therefore it’s got to be permitted,” my immediate question is this: “Are you saying that whatever the Bible does not expressly condemn, it condones?” And when the answer is no, as it must be, well, then, what’s the point here? Now this is where, Josh, I get into a little trouble with pro-lifers.

Josh Brahm: We’re used to that on this show, so you’re in good company.

Scott Klusendorf: Well, good! Because I actually think pro-lifers are going at it the wrong way. We trot out Psalm 139, we trot out Jeremiah 1:5, we trot out Job 3:3…and we go to these poetic books, these prophetic books as well from the Old Testament, and we then use those to try to make a positive case for the pro-life view.

I think there’s a much better way for us to make our case. And I love to make an argument where I grant the major premises of my opponent, but still show they’re mistaken in what they’re reasoning. That’s a very powerful way to argue. And there is a much simpler way to make a case for the pro-life view, which I believe the Bible supports, but I believe it supports it in a way that most pro-lifers are not articulating. So that’s where I differ from some.

Josh Brahm: What would the pro-choice Christian say when you respond to them with your first question? Where are they going to go now? I’ve read these long articles from people who have actually thought about this, and they don’t just assert; they actually argue for a position – where exactly are they coming from, and how can we respond to them?

Scott Klusendorf: Well, the first way they’ll respond is to say, “Well, isn’t it reasonable to say that if Scripture doesn’t make a direct command against something, we should at least be charitable in letting people make up their own mind?” But again, the Bible is silent on a lot of things. The Bible is silent on cutting up your neighbor and using them for shark bait. That doesn’t mean you can do that.

Here’s what Scripture does teach, and this is where I think pro-lifers need to make their pro-life case. Don’t go to Psalm 139. Don’t go to Jeremiah 1:5. Here’s what we argue: Premise 1 – Scripture teaches that all humans have value because they bear the image of their maker. That’s found in Genesis 1. That’s found even in the New Covenant in James, chapter 3. James condemns gossiping and slander against your neighbor because when you do this, you are tearing down the image of God in the person you are slandering. So it’s condemned.

Premise 1 – All humans bear God’s image, hence have value. Premise 2 – Because we bear God’s image, the shedding of innocent blood, meaning the unjust killing of human beings, is strictly forbidden (Exodus 23:9, Proverbs 6:16-19, to name just a few passages). What’s the conclusion, then, that pops out here? Well, there’s really only one question left to ask. If the unborn are human, then the same commands that forbid the shedding of innocent blood in these other cases apply to them as well.

That’s the case we need to make. Now, at this point, our job has become immeasurably simpler. If the unborn are human, and the science of embryology establishes that they are indeed human – a fact you’ve covered many times on this show that we probably don’t need to dive into here – if the unborn are human, then the commands of Scripture mean their blood should not be shed without justification any more than yours or mine should be. That’s the case we need to be making. And in response to that, I have not heard a satisfactory response from those who support abortion from tying it to a Scriptural justification.