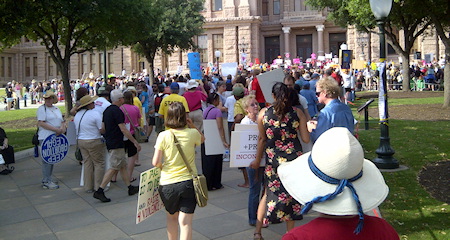 The Hill is reporting that the “massive” pro-taxpayer funded abortion rally set for December 2nd is expected to draw only hundreds:

The lobby day is expected to draw around 500 abortion-rights advocates to rally in the Dirksen Senate Office Building and door-knock on Capitol Hill, said Tait Sye, a spokesman for Planned Parenthood.

The question remains, why are pro-abortion forces are only able to draw limited numbers while the March for Life in D.C draws around 200,000 pro-life advocates every year?

Maybe it is because a CNN poll last month found:

Generally speaking, are you in favor of using public funds for abortions when the woman cannot afford it, or are you opposed to that?
37% Favor, 61% Oppose

Marchers from the 2009 Walk for Life fill the streets in Washington, D.C.