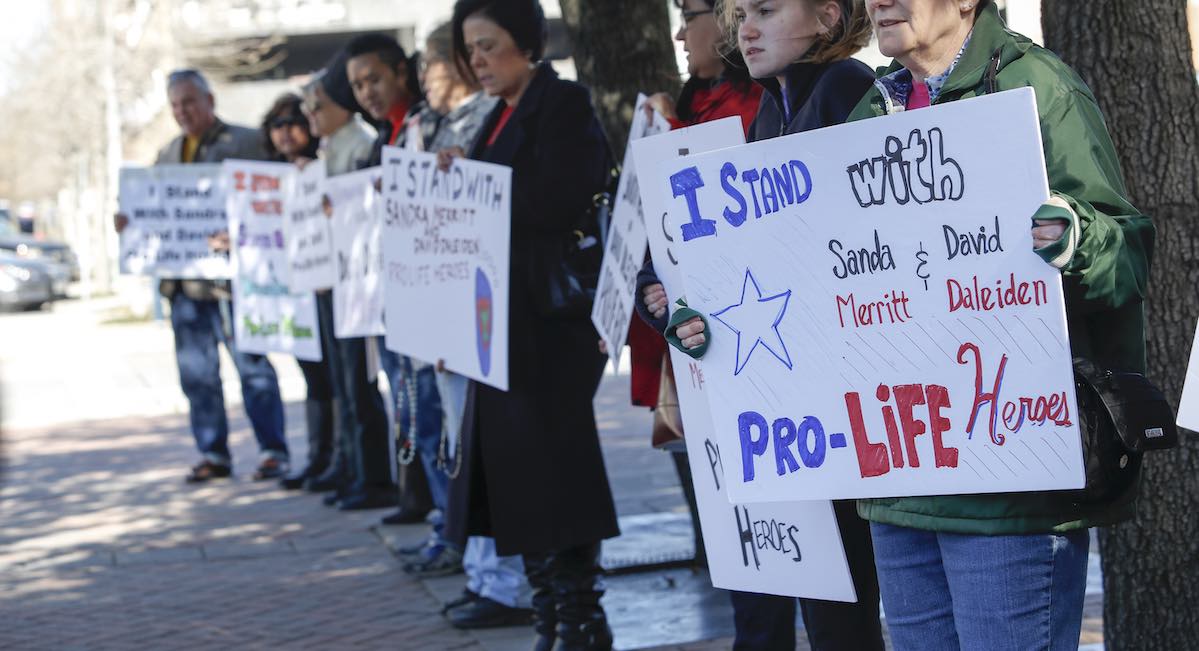 There has been a glaring double standard surrounding the investigation and ensuing criminal charges against pro-life journalists David Daleiden and Sandra Merritt from the Center for Medical Progress (CMP) who exposed Planned Parenthood’s participation in the trafficking of aborted baby body parts. The fact is, others, such as animal rights activists, have used the same undercover tactics to expose potentially illegal activity — but only pro-life activists are being targeted with criminal charges for using undercover video to expose these abuses.a

Here are some examples…

In 2012, the LA Times reported how the U.S. Department of Agriculture temporarily closed a Central California slaughterhouse (Hanford-based Central Valley Meat Co.) “after reviewing video footage from the animal rights group Compassion Over Killing, which said it had captured images of torture and intentional cruelty to cows.”

“… Each day, after working inside Central Valley Meat and wearing a hidden camera to capture the cruelties routinely taking place behind closed doors, our investigator also wrote daily log notes to further illustrate the misery endured during the last moments of these cows’ lives,” the group wrote.

In 2013, Mercy for Animals (MFA), another animal rights group, claimed to have used “a hidden camera” to “exposed rampant animal cruelty and neglect at Hudson Valley Foie Gras.” When a district court overturned California’s law prohibiting the use of the sale of foie gras, rather than seek charges against MFA for publishing undercover video, then Attorney General (and PP supporter) Kamala Harris did not target MFA but instead filed a notice to appeal against the court’s decision.

2014: Officials launch investigation into animal cruelty based on undercover video; activists not punished

In 2014, Compassion over Killing publicly announced, “Undercover video footage taken by a COK investigator who worked inside Cal-Cruz Hatcheries, Inc. (“Cal-Cruz”)… revealed widespread and horrific abuse to newly hatched chicks and ducklings who were bound for the meat industry.”

In 2014, the Huffington Post reported a separate instance in which a “weeks-long undercover investigation” using “undercover video” revealed “widespread animal abuse and cruelty at one of California’s largest duck farms.” Officials did not punish MFA. Instead, “the Sonoma County Sheriff’s Office launched an investigation into Reichardt Duck Farm, but say they have yet to find anything amiss…. Mercy for Animals continues to contend that their investigation uncovered rampant animal abuse.”

In 2015, the LA Times reported, “A video purporting to show inhumane slaughter practices at a Foster Farms chicken plant in Fresno County has led to the suspension of five workers and a criminal investigation by the sheriff’s office.” The graphic undercover footage credited with exposing the abuse was released by Mercy for Animals, which “sent two investigators to work at the plants” where they “gathered hours of footage.” Instead of prosecuting undercover investigators, the Fresno County Sheriff’s Office referred the case to the agency’s agricultural crimes task force. MFA, with no fear of criminal charges, filed a formal complaint with the California’s AG.

Despite the regular use of undercover footage in the state, in 2017, “Matt Rice, Executive Vice President of Communications at Mercy for Animals, told The Federalist their organization has never faced criminal charges in California or any other state for their undercover tactics.” 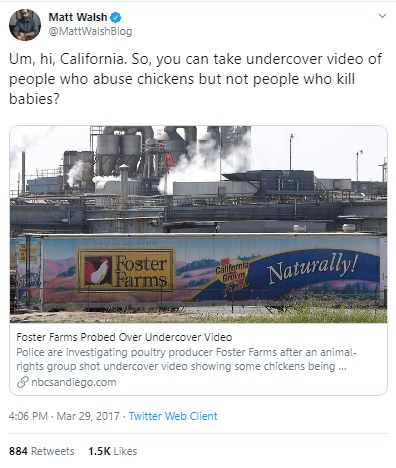 In 2017, the New York Times reported, “Compassion Over Killing has produced a video that it says shows repeated abuse of sheep at a California processing plant owned by the nation’s largest lamb producer…. The group contends that the images show violations of the federal Humane Methods of Slaughter Act, which decrees that animals must be ‘rendered insensible to pain’ before they are slaughtered.”

In 2018, Mercy for Animals took to Twitter to announce that their “undercover video footage showed dolphins, sea lions, and countless other marine animals drowned in California swordfish driftnets,” adding that “Governor Jerry Brown [a staunch pro-abortion advocate] signed Senate bill 1017 into law to phase out the use of these cruel nets.” 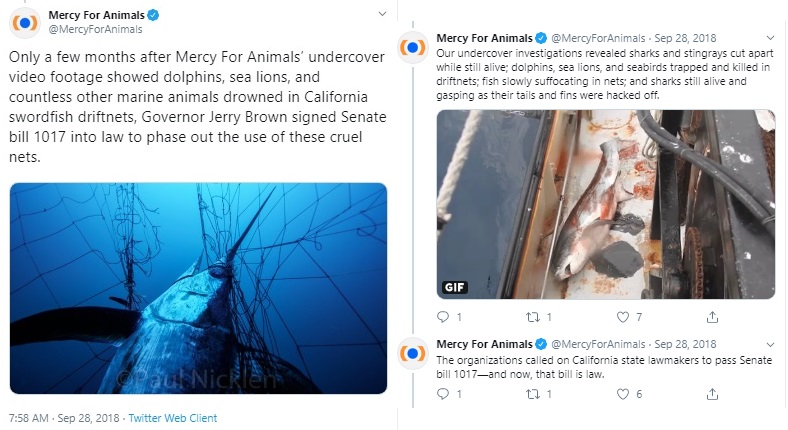 According to MFA, the video footage “secretly recorded by a Mercy For Animals investigator has uncovered shocking animal abuse in the driftnet fishing industry….”

Media catches on to the double standard

Live Action News has previously documented how pro-abortion organizations like the National Abortion Federation and NARAL Pro-Choice America have praised the use of undercover investigations when it suited their goals. And California state officials, some who have targeted the Center for Medical Progress for prosecution, have themselves selectively protected animal rights organizations.

Harris was replaced by California attorney general Xavier Becerra who, according to National Review Online writer Ian Tuttle, “then filed 15 felony charges against CMP investigators, David Daleiden and Susan Merritt, the journalists who exposed the brutality and profiteering of Planned Parenthood.” Tuttle labeled the move “partisan abuse,” writing in part:

There is much that ought to be said about California’s transparently partisan abuse of the state’s prosecutorial power. (In recent years, undercover videos have prompted California’s Justice Department to investigate claims of animal cruelty on chicken farms. This, as opposed to homicide at abortion clinics, is enough to prompt the curiosity of California’s law-enforcement officials.) There is much, too, that ought to be said about the hypocrisy of the media types who are suddenly silent about this unconcealed assault on reporters’ freedoms, after spending the days since Donald Trump’s election propounding the importance of a vigorous press….

… But what links media hypocrisy with partisan hypocrisy, and what is at the heart of this shameful affair, is conscience twisted beyond recognition. The Center for Medical Progress revealed Planned Parenthood’s trade in fetal parts and its winking attitude toward the law. But it also revealed the sheer moral rot that consumes the abortion industry from top to bottom. Hidden from everyday view are those who, over appetizers and wine, talk about “crushing” babies to death, or joke about how an abortionist worth her salt will “hit the gym” because it requires “biceps” to dismember a baby! And there are others, such as Becerra and Harris, who may not handle the scissors, but who agree that snuffing out the life of a child on a table should be celebrated, and that those who would expose those activities should be locked up. This is the barbarism of “progressive” consensus. 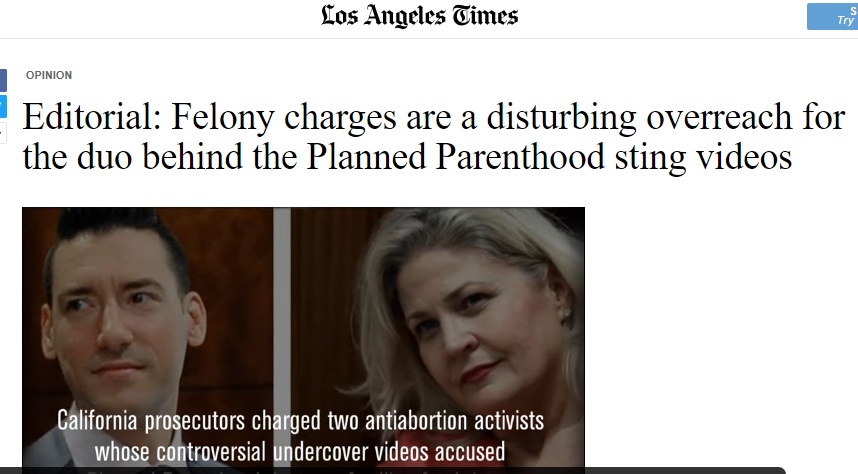 In 2017, a  Wall Street Journal writer also took note, citing — believe it or not — the LA Times editorial board:

“It’s disturbingly aggressive for Becerra to apply this criminal statute to people who were trying to influence a contested issue of public policy, regardless of how sound or popular that policy may be,” writes the L.A. Times editorial board.

“Planned Parenthood and biomedical company StemExpress, which was also featured in the videos, have another remedy for the harm that was done to them: They can sue Daleiden and Merritt for damages. The state doesn’t need to threaten the pair with prison time,” adds the editorial.

“In similar cases, we have denounced moves to criminalize such behavior, especially in the case of animal welfare investigators who have gone undercover at slaughterhouses and other agricultural businesses to secretly record horrific and illegal abuses of animals,” continues the Times editorial.

Live Action News author Cassy Fiano-Chesser also noted in 2017, “This is quite clearly a witch hunt against a pro-life group of citizen-journalists. The problem is not that Daleiden and Merritt engaged in undercover journalism; it’s that they exposed Planned Parenthood’s criminal behavior…. This prosecution of Daleiden and Merritt is a simple – and incredibly biased – case of state officials doing what they can to protect Planned Parenthood.”