The President of the United States and Pope Francis have both shown support for the parents of little Charlie Gard, a 10-month-old baby boy on life support in the UK.

Charlie’s parents, along with hundreds of other people, gathered outside of Buckingham Palace to protest the court’s decision to take the boy off of life support against his parents’ wishes. Charlie was born with a rare mitochondrial depletion condition, and doctors treating him at Great Ormond Street Hospital claim it is in his best interest to turn off his life support. His parents, Chris Gard and Connie Yates, however, have raised 1.4 million dollars to take him to the United States for an experimental treatment that may help him.

After the Vatican Academy for Life released a statement attempting to remain neutral, many people were outraged, believing the Vatican to be siding with the hospital. Pope Francis soon released his own statement on July 2, 2017, stating that he “prays that their wish to accompany and treat their child until the end is not neglected” and he “expresses his closeness to [Charlie’s] parents.” 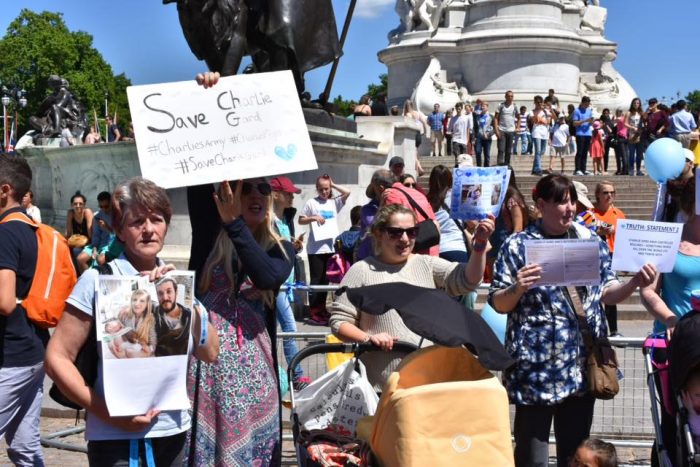 Hundreds gather outside of Buckingham Palace to support Charlie Gard

Also on July 2, 2017, hundreds of people joined together to protest the court’s decision to end Charlie’s life. They gathered outside of Buckingham Palace chanting, “save Charlie Gard” and “release Charlie Gard.” A Facebook page created for the protest stated:

We wish to raise awareness of certain things that were said in court that have later been found to be in contradiction of medical evidence that has been made public. We have questions that need answering.

On July 3, 2017, President Donald Trump offered his support via Twitter, writing, “If we can help little #CharlieGard, as per our friends in the U.K. and the Pope, we would be delighted to do so.”

If we can help little #CharlieGard, as per our friends in the U.K. and the Pope, we would be delighted to do so.

The hospital was originally planning to turn off life support on June 30, 2017, but have decided to give Charlie’s parents more time with him after refusing to allow Charlie to go home.

“We are utterly heartbroken,” Charlie’s parents said on June 29 on Facebook, “spending our last precious hours with our baby boy. We’re not allowed to choose if our son lives and we’re not allowed to choose when or where Charlie dies. We and most importantly Charlie have been massively let down throughout this whole process. Charlie will die tomorrow knowing that he was loved by thousands… thank you to everyone for all your support.”

Even if the treatment in the United States doesn’t help Charlie and he dies as his current doctors predict, his parents say they will be glad that his involvement in the experimental treatment could help future children with his condition.

According to Life Site News, the Vatican-owned Bambino Gesù Hospital in Rome has, just today, reached out to Great Ormond Street Hospital, offering to take Charlie. However, Bambino Gesù president Mariella Enoc seemed to downplay the role of a possible medical therapy, saying, “We know that it is a desperate case and that there are no effective therapies. We are close to the parents in prayer and, if this is their desire, willing to take their child, for the time he has left to live.”