Mere hours after Oklahoma Governor Kevin Stitt signed a law that protects nearly all preborn human beings in the state, Planned Parenthood and the Center for Reproductive Rights announced that they will attempt to block the law from going into effect.

The Oklahoma law, HB 4327, restricts abortion at fertilization, although it does contain several exceptions, and abortions are still allowed in cases of rape and incest or when the mother’s life is in danger — though a medical procedure performed to save a mother’s life (not to kill the child) is not an abortion. Like the Texas Heartbeat Act, the law allows private citizens to sue abortionists who commit abortion in the state. 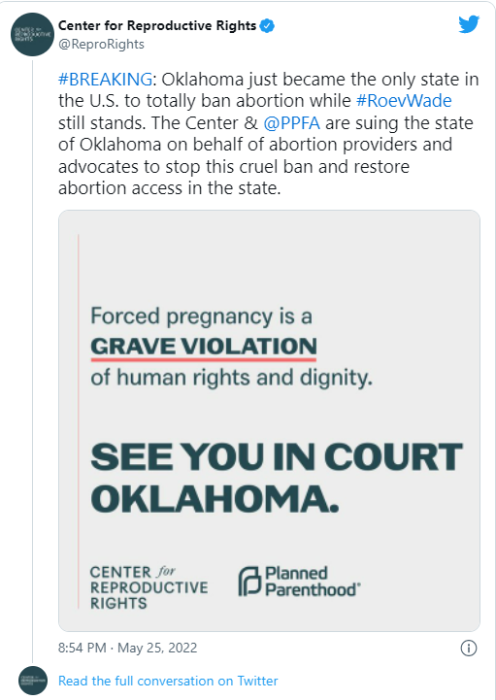 READ: After my D&C suction abortion, I saw the remains of my baby in a bucket

“For anyone seeking abortion in Oklahoma and beyond: Planned Parenthood and our partners are fighting for you,” Alexis McGill Johnson, president and CEO at Planned Parenthood Federation of America, said in a statement when the bill was signed. “We will bring everything we have to make sure you can get the care you need, and challenge every ban enacted in Oklahoma.”

The bill’s passage follows that of SB 1503, the state’s “heartbeat act,” which prohibits abortion after around six weeks, when a preborn child’s heartbeat can be detected. The Center of Reproductive Rights, which has already filed a lawsuit against that law, announced that they were going to ask that their challenge to HB 4327 be added to that existing case, which is currently pending before the Oklahoma Supreme Court.

“We are seeing the beginning of a domino effect that will spread across the entire South and Midwest if Roe falls,” said Nancy Northup, president and CEO of the Center for Reproductive Rights. “Banning abortion after six weeks was not extreme enough for Oklahoma lawmakers. The goal of the anti-abortion movement is to ensure no one can access abortion at any point for any reason. Right now, patients in Oklahoma are being thrown into a state of chaos and fear. That chaos will only intensify as surrounding states cut off access as well. We will not stop fighting for the people of Oklahoma and for everyone across the country. We all deserve the freedom to control our own bodies and lives.”

Governor Stitt drew attention to the presence of a new human life at conception, noting, “From the moment life begins at conception is when we have a responsibility as human beings to do everything we can to protect that baby’s life and the life of the mother. That is what I believe and that is what the majority of Oklahomans believe. If other states want to pass different laws, that is their right, but in Oklahoma we will always stand up for life.”