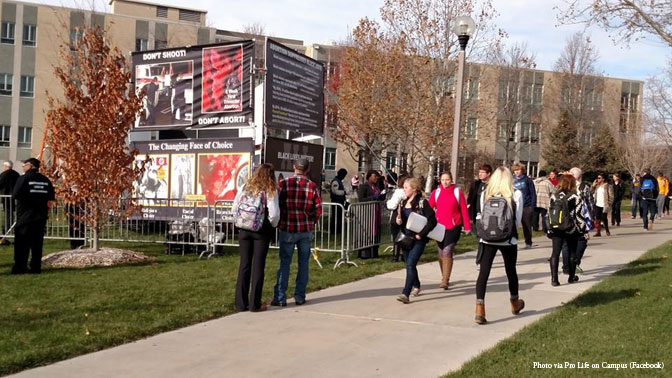 The issues of “safe spaces” and “trigger warnings” have been in the news frequently this fall semester, and they are now affecting pro-life students.

As Campus Reform reported, at the University of Missouri, members of the Genocide Awareness Project (GAP) and Life Education and Resource Network (LEARN) set up pro-life displays at the campus’s Kuhlman Court for three days. The displays raised awareness about the effects of abortion, particularly on the African-American community.

Some criticized the display for a whole host of reasons, claiming that the facts included were wrong (despite the fact that some of the statistic sources were the Centers for Disease Control and the pro-abortion Guttmacher Institute), that the display was anti-Semitic, and that the timing of the event was poor:

The pro-choice groups said they particularly took offense to the images because they were poorly-timed with it being the week preceding finals, and that it was triggering for many students during such a stressful time.

One protester held a sign and shouted, “We shouldn’t have triggers on our campus!” and “Offensive ideas have no place on this campus!”

Another shouted, “It’s okay to have your opinion, but what’s up with these images?”

A counter-protest was organized, with representatives from Planned Parenthood and other student groups. Unusual assumptions abounded, with at least one protest sign reading, “I bet they’re voting for Donald Trump” – despite the fact that the group did not express any political affiliations with their displays. (As an aside, some pro-lifers have expressed concerns and questions about Trump’s pro-life views.)

One woman shouted, “If these images disturb you, please go to the Title IX website and fill out a Bias Incident Report!” (Apparently, “bias incident” is code for “free speech with which you disagree.”)

Mizzou Students for Life wrote a statement on their Facebook claim that they “accept the freedom of speech on campus,” but disagreeing with the “tactics” of the Genocide Awareness Project. “We want to approach this issue from a place of love and logic, not scare tactics,” said the pro-life group’s leader of the project’s use of abortion victim images.

Today through Wednesday, the Genocide Awareness Project will be on campus. Those who witness the images they present…

Posted by Mizzou Students for Life on Monday, December 7, 2015

The “pro-choice” counter protesters didn’t seem to be fond of the idea of letting students come to their own conclusions regarding the display. They offered to “willingly recycle” the pamphlets handed out by the pro-lifers, and were armed with a recycling bin.

They also took the opportunity to set up their own tables to advertise Planned Parenthood (oh my, do we need to fill out a “bias incident report” for this?) by asking passersby “Do you support women’s health?” (Who’s going to say “no” to that question?)

As Campus Reform notes, one activist started handing out free condoms and yelling to the pro-lifers, “We know you have sex! Don’t lie!” As the display was not directly about sex education but about the destruction of human life – more directly, Black lives – through abortion, such comments seem out of place. (Remind me… which side is supposed to be ‘obsessed with sex’?)

What should truly be “triggering” and “offensive” about this whole display is the fact that abortion takes the lives of so many preborn babies in this country, with African-American babies being particularly vulnerable – a point which was lost on “pro-choice” Mizzou students.