The Oklahoma Supreme Court has ruled that Initiative Petition 395, which would have given Oklahomans the right to define personhood from conception to natural death, was unconstitutional. According to the Life Legal Defense Foundation, the state court ruled that despite efforts by Personhood Oklahoma to collect the required number of signatures for the initiative to appear on the ballot, IP 395 would not be permitted on the ballot. Efforts by the Center for Reproductive Rights and other pro-choice individuals led to the decision. 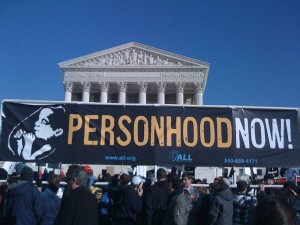 In August, Personhood Oklahoma filed a petition asking the United States Supreme Court to review the decision by the Oklahoma Supreme Court. The Life Legal Defense Foundation is supporting the petition by Personhood Oklahoma with a brief. The brief alleges that the Oklahoma court “acted precipitously to deprive the petitioners and the people of the state of Oklahoma of their right to engage in political expression on a matter of great public concern.” You can read the full brief here.

Allison Aranda, senior staff counsel for the Life Legal Defense Foundation, stated, “I find it incredible that the supreme court of any state would usurp the right of the people to initiate legislation and engage in political discourse about the merits of any proposed law. The right to bring matters of public concern to national attention through the initiative process is fundamental to bringing about political change.”

According to the Life Legal Defense Foundation’s executive director, Dana Cody, “[i]f the United States Supreme Court does not affirm the right of the people to engage in the initiative process, the people’s power will diminish, and we’ll be stuck with activist judges. This isn’t just an Oklahoma issue; it is a threat to political freedom in any state.”

Live Action will continue to cover developments in this case.