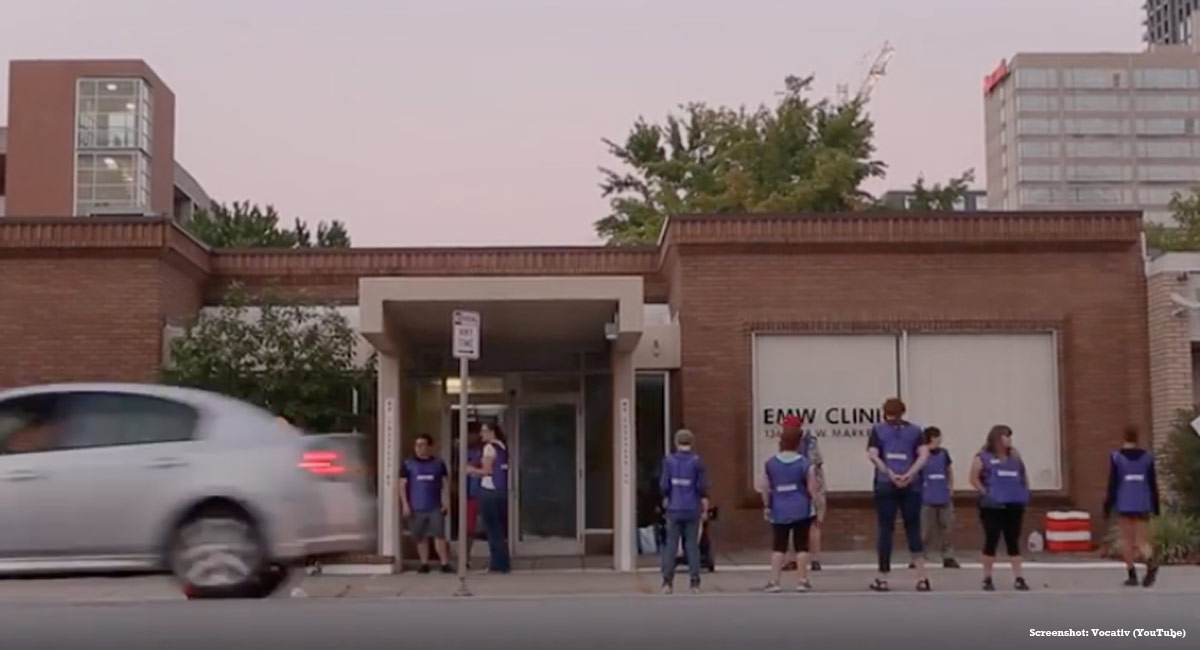 Members of the city council in Louisville, Kentucky, are seeking to put buffer zones in place around the city’s abortion facility, though a similar effort failed last year.

Cassie Chambers Armstrong, a member of the Metro Council, has reintroduced an ordinance that would place a 10-foot buffer zone around the state’s lone abortion facility, EMW Women’s Surgical Center. She announced the measure at a press conference held at the abortion facility and claimed the buffer zone wouldn’t infringe on anyone’s rights. “It turns down the temperature and it gives police a tool to regulate unsafe conduct and most importantly, it doesn’t violate anyone’s right to free speech,” she said.

In an act of political theater, Armstrong made the three-minute walk from a parking garage to the abortion facility, which she said proves a buffer zone is needed. “It’s a very unsettling, very nerve-racking experience, and it makes you feel very unsafe. People who were unmasked would be very much right in my face,” she claimed in an interview with WDRB. “I feel more strongly now than ever about the importance of a safety zone.”

Meg Sasse Stern, an escort for EMW Women’s Surgical Center, also tried to paint pro-life sidewalk counselors as violent, saying they harass women, even hanging onto their legs to prevent them from entering the facility. But numerous pro-life groups say this isn’t true.

“Over the years, hundreds of women have accepted the help of sidewalk counselors and have expressed gratitude for the chance to benefit from resources and assistance to help them choose life for their unborn children,” Archbishop Joseph Kurtz said in a statement. Buffer zones could harm vulnerable women who need our help, and it would restrict the first amendment rights of sidewalk counselors offering a life-saving alternative to abortion.”

Dr. Todd Gray, the executive director-treasurer of the Kentucky Baptist Convention, told Kentucky Today that sidewalk counselors aren’t there to harass or scare women but to help them. “Pro-life supporters who show up at the Louisville abortion clinic do so out of a place of love for the unborn and compassion for those about to make a horrible and irreversible decision,” he said. “Lives have been saved because of sidewalk counselors who understand the pressure a desperate woman or family may be feeling.

Gray also added that pro-lifers often feel compassion for abortion-minded women, and want to give them other choices. “Most of those who are coming for abortion are doing so because they feel there is no other option, but the pro-life volunteers are there to show them there is a better way,” he said. “The vast majority of the pro-life supporters are respectful, compassionate, caring people who are there to pray and make sure that individuals and families are aware that abortion is not their only option.”

The previous vote on a buffer zone ordinance in Louisville failed along bipartisan lines, with both Democrats and Republicans rejecting it. And though it is pro-lifers who are being portrayed as violent, a pro-life sidewalk counselor is known to have been injured there, suffering a head injury and a broken femur after being assaulted by a woman exiting the abortion facility.

The 2014 Supreme Court Case, McCullen v. Coakley, already ruled on buffer zones and found them to be unconstitutional, as they discriminate against one specific viewpoint and squelch free speech. Other court rulings have found that buffer zones do not apply at all to peaceful pro-life counselors. While picketing and demonstrating may not be allowed, one-on-one conversations and efforts to offer alternatives, resources, and support have long been found to be well within a sidewalk counselor’s rights.