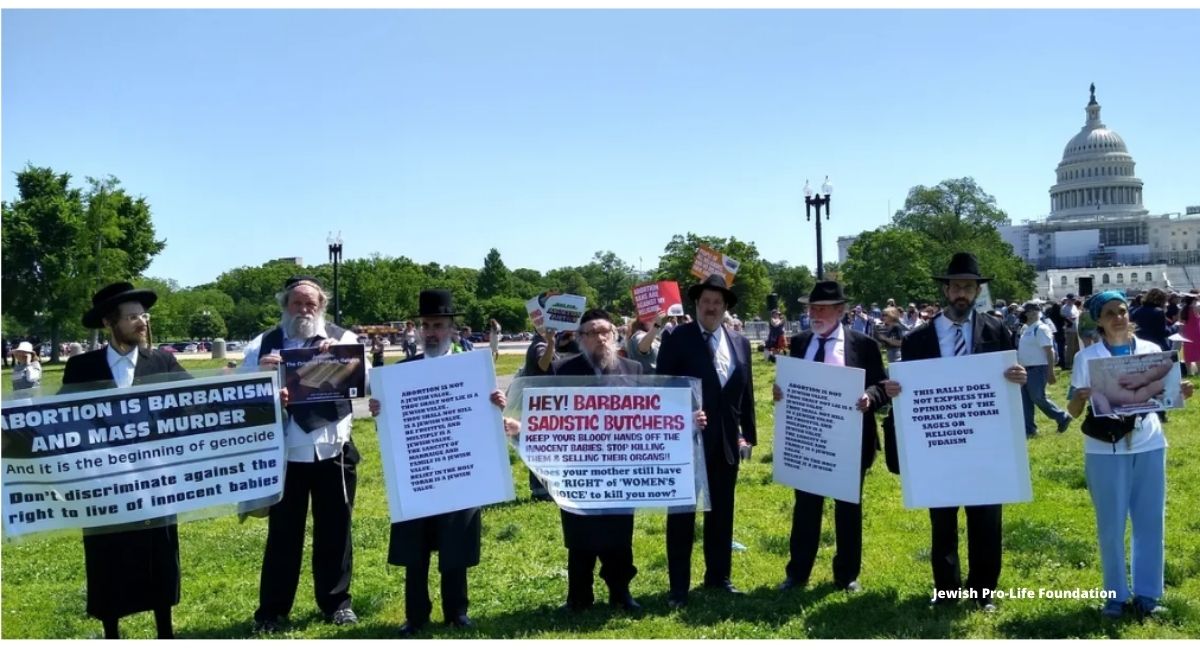 (Jewish Pro-Life Foundation) — The National Council of Jewish Women (NCJW) hosted a Jewish Rally for Abortion Justice in Washington, DC on May 17, 2022. The crowd, gathered near the reflecting pool at the Capitol Building, included approximately 300 NCJW members, leadership, allies, and reproductive rights clergy unified by a deliberate misrepresentation of Judaism reflected in the two themes of the event: Abortion access is a Jewish value and banning abortions is a religious freedom issue.

The NCJW assault on the intrinsic value of life in the womb has gone virtually unopposed for decades, culminating in this embarrassing, shameful and dangerous display of fake Judaism meant to instill victimhood, fear, and fanatical hysteria among their followers should Roe be overturned. Those gathered were instructed to ramp up the fight for the right to kill their children and to contribute to the NCJW’s Jewish Fund for Abortion Access. In partnership with the National Abortion Federation, this pool of blood money will pay for abortions for those who can’t afford the overpriced cost of child murder.

The speakers used the microphone to broadcast their propaganda, convincing the gullible crowd that an America without Roe will trigger a white supremacist assault on Jewish religious practice and another genocide of the Jews by death from unavailable abortion access. Into this delusional nightmare appeared eleven representatives of the Jewish Pro-Life Foundation to offer sanity, education, and healing. Finally, the NCJW monopoly on abortion messaging ended.

READ: Rabbi says despite claims to the contrary, Judaism is ‘unambiguously pro-life’

While speakers were loudly shouting their abortions without regret, our outreach revealed truths about Judaism and abortion never before presented to the uninformed audience. Our group included genuine Orthodox rabbis carrying posters that spoke to the heart of the matter: that killing unborn babies is not a Jewish value and Judaism forbids killing innocent people. Our eye-catching signs offered food for thought to minds and spirits starving for the truth and hearts yearning for permission to grieve lost children. We witnessed confusion and surprise in the faces of some, and indignant rage in others. Powerful educational opportunities were made possible during our conversations with curious or belligerent attendees. Here’s a summary of our message at the rally:

Judaism allows for pregnancies to be ended in very rare cases where the mother’s physical life is threatened. But ending a pregnancy in these cases involves preterm delivery and emergency C-sections as well as surgery for ectopic pregnancy — none of which are considered abortion. Abortion — the intentional killing of a preborn human — is never medically necessary even to save a woman’s life. The claim repeated over and over again by rally speakers that legal protections for unborn citizens threaten Jewish religious practice is invalid.

Falsely describing unborn children as parasites, protoplasm, or sub-human makes it easier for compassionate mothers and fathers to use abortion. Modern imaging of unborn babies clearly shows the truth that science proves – life begins at conception and babies in the womb smile and sing and dream and feel pain similar to children outside the womb. Good-hearted Jewish men and women can no longer be easily convinced otherwise, so now abortion promoters use bodily autonomy, the right to healthcare, and reproductive justice to sell their killing agenda.

The Holocaust, a government-sanctioned genocide of Jews, was invoked many times during the rally to arouse long-standing fears that Jews in particular will be victimized without government-sanctioned unlimited abortion access. The rarity of life-threatening pregnancies and the abundant help available to women and families today reflect an entirely different reality. From what was suggested from the podium on Tuesday, more Jewish lives are at risk from abortion used as birth control than from Roe being overturned.

Exodus 21:22-25 does NOT prove that Judaism authorizes abortion. Mistranslation and false interpretation of these verses have been weaponized against unborn children and their mothers. Rally attendees couldn’t imagine that their blind faith in the propaganda machine operating for decades could be wrong. They rejected the idea that they were being manipulated into destroying their own children in the name of Judaism to enrich abortion industry profiteers and benefit ambitious abortion promoters.

Faithful Jews anticipate the June holiday of Shavuos when we celebrate accepting the Torah at Mt. Sinai, where we were given the responsibility to teach and demonstrate true justice, mercy, love of God, and respect for life to a spiritually destitute world. We gladly added this spiritual dimension to the NCJW event at our nation’s capital and anticipate a future Jewish society that unites around supporting the gift of life for people of all faiths and backgrounds.

Editor’s Note: This article was originally published by the Jewish Pro-Life Foundation and is reprinted here with permission.

Editor’s Note: This article was edited from the original with the permission of the author.