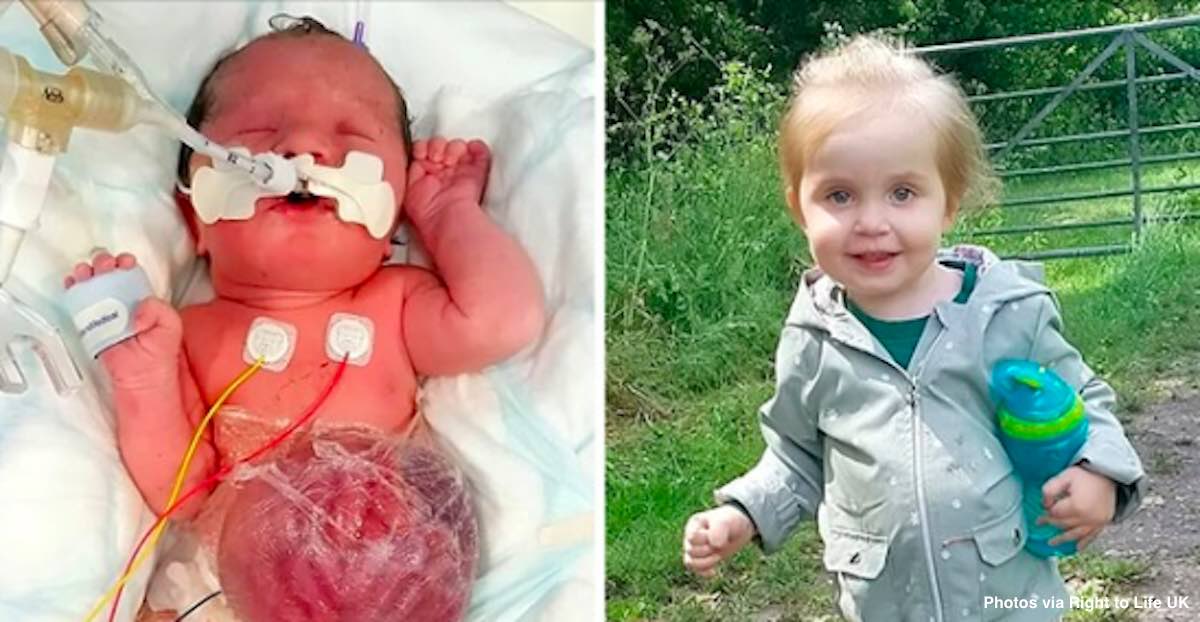 (Right to Life UK) A two-year-old from Cambridge born with her stomach, liver and bowel on the outside of her body continues to defy the odds after her parents rejected advice from doctors to have an abortion.

Doctors did not expect Laurel Phizacklea, who was born with a major exomphalos – a condition which occurs when the baby’s abdominal wall does not form during pregnancy – to survive birth.

They advised her parents, Kelly and Sean, to consider abortion following a 12-week scan. But they refused, wanting to give their daughter a chance at life, now Laurel continues to defy expectations.

Over the past two years, skin has formed around the organs, and Laurel can eat, drink and go to the toilet like any other toddler.

At the beginning of 2021, the little fighter should be able to have corrective surgery placing her vital organs back inside her body.

Kelly and Sean were over the moon when they discovered they were expecting their first child in October 2017.

The couple excitedly attended their 12-week scan but were blindsided when doctors said something was wrong and offered them a termination.

Doctors explained that their unborn baby had exomphalos.

Early in all pregnancies, the intestine develops inside the umbilical cord and then usually moves inside the abdomen a few weeks later.

In exomphalos, the intestines – and in this case the stomach, liver and bowel – remain inside the umbilical cord but outside the abdomen.

Doctors were also determined that Laurel had a spinal abornomality – and advised Kelly and Sean to have an abortion.

“We couldn’t quite believe what we were hearing when they offered us an abortion,” Kelly told the Mail.

“People kept saying: ‘It’s OK, you can try again’ – but I didn’t want another baby.

“I was so in love with this baby and we knew we would do everything we could for her.”

‘From that moment on we knew she was a fighter’

Kelly continued with her pregnancy and went for scans every two weeks to monitor the progress of her unborn baby.

Three weeks before Laurel’s birth, doctors discovered the exomphalos had doubled in size – prompting medics to take both Kelly and Sean aside to tell them their daughter would not survive birth.

However, on June 6th 2018, Laurel let out a cry after being delivered by caesarean section.

“When we heard her cry out I couldn’t believe it,” Kelly said. “Both Sean and I just burst into tears.

“We knew it was far from the end of it – but to hear her cry was a huge relief and from that moment we knew she was a fighter.”

Laurel was born weighing a healthy 7lb 5oz (3.3kg), and put straight on a ventilator before being transferred to the neonatal intensive care unit.

After seven hours, Kelly and Sean were finally able to meet their daughter properly for the first time.

“Her tummy was swaddled in bandages,” Kelly said. “We knew to expect it to look different – so we weren’t scared at all.”

Kelly and Sean were provided with a room at the hospital by the Sick Children’s Trust so they could be with their daughter during her three and a half month stay in Addenbrookes Hospital.

Doctors were worried that Laurel wouldn’t be able to breathe on her own, as it is common in exomphalos cases for the lungs not to have formed properly – but again Laurel defied the odds.

READ: Baby with half a heart defies odds after doctors refuse to help him

Now, the two-year-old is flourishing at home as she awaits corrective surgery to have her organs internalised at the beginning of 2021.

Laurel will undergo the operation at King’s College Hospital, London.

Kelly said: “It is a scary thought, and there are definitely concerns.

“But Laurel has already been through so much, and I am sure she will continue to take everything in her stride.”

Although it will be a relief for both Kelly and Sean when they don’t have to worry about their daughter’s every move, they do worry that it will cause a certain amount of separation anxiety for the tot.

“She loves her tummy so much,” explained Kelly. “She rubs it in the bath when I take the dressing off to wash her and says ‘ah tummy’.

“It’s very cute, and she couldn’t be prouder of it. But I do worry about how she’ll react when it’s not there anymore.”

She added: “I don’t know how we remained positive throughout my pregnancy with Laurel. It really looked as if she wouldn’t survive birth, but Sean and I never gave up hope and she has done us so proud.

“Her pouch of organs on her tummy is a part of her and she doesn’t let it get her down. Laurel is a true inspiration and amazes us every day.”

Editor’s Note: This article was published at Right to Life UK and is reprinted here with permission.
“Like” Live Action News on Facebook for more pro-life news and commentary!