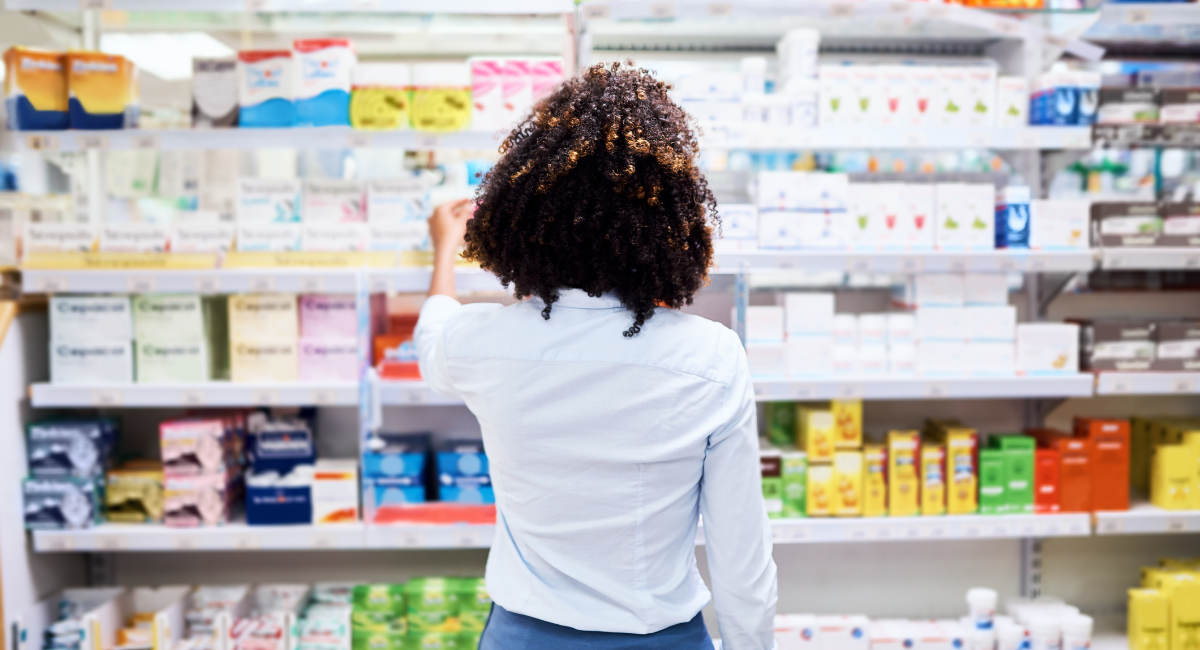 Abortion pill safety regulations created by the U.S. Food and Drug Administration (FDA), known as REMS, are the next target of the profitable abortion industry, which has historically bemoaned all regulations to protect women. The ultimate goal of these abortion advocates — many associated with Advancing New Standards in Reproductive Health (ANSIRH) — is to allow over-the-counter dispensing of the abortion pill.

Calls to lift the REMS

The FDA describes its Risk Evaluation and Mitigation System (REMS) as a “drug safety program that the U.S. Food and Drug Administration (FDA) can require for certain medications with serious safety concerns to help ensure the benefits of the medication outweigh its risks. REMS are designed to reinforce medication use behaviors and actions that support the safe use of that medication.” Only a few medications require REMS, and although this safety requirement exists to protect women, abortion advocates have been pushing for years to have this safety protocol lifted.

The latest push to end these safety measures follows a further weakening of the REMS in recent months by the Biden FDA, enabling the abortion pill to be shipped by mail (December 2022) or dispensed by retail pharmacies (January 2023). But before the ink had time to dry, abortionist Daniel Grossman began demanding that the FDA remove the REMS, tweeting, “This is incredible news! Medication abortion pills are safe. I am glad the FDA has made this historic change, and it’s time to end the non-evidence-based REMS, which makes it difficult for many providers to prescribe abortion pills.” 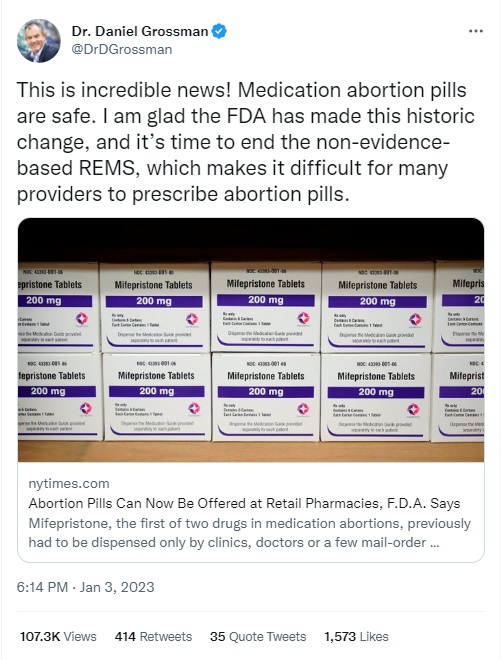 Grossman has been a primary force behind expanding the abortion pill regimen, which consists of the drugs mifepristone and misoprostol. Grossman not only pushed for the FDA to completely remove the abortion pill safety protocols, but is also advocating for the idea of shipping women (or teens) abortion pills in advance of a verified pregnancy (often referred to as advanced provision of abortion pills). He also recently made the highly unethical suggestion that emergency health care personnel should leave out important medical facts from the records of women presenting with abortion pill complications. And while Grossman and his abortion cohorts claim there is no evidence for the REMS, the facts show otherwise.

Grossman was joined by abortion activist Renee Bracey Sherman and ANSIRH founder Tracy Weitz in an opinion piece published by The Nation where they called the FDA”s recent changes “red tape” and “a barrier” to those seeking abortion. The three suggested again that the abortion pill should be available over-the-counter, like Tylenol or Advil.

Grossman was referred to by The Nation as a professor of obstetrics, gynecology, and reproductive sciences at the University of California–San Francisco and director of ANSIRH. But what isn’t stated is that Grossman is also an abortionist and recent National Abortion Federation and NARAL Pro-Choice America board member who has served as a consultant to Planned Parenthood Federation of America and the Center for Reproductive Rights (along with leadership in other pro-abortion groups). This frequently consulted “expert” on abortion has multiple conflicts of interest and is deeply tied to abortion. For one, Grossman was a senior leader at IBIS Reproductive Health while conducting abortion pill studies at the same time that the organization was getting direct funding from Danco, the abortion pill manufacturer.

Renee Bracey Sherman is founder and executive director of the abortion groups We Testify and is a former NARAL board member. Tracy Weitz, as previously stated, cofounded ANSIRH but left to become the Buffett Foundation’s director of U.S. programs in 2014. The Buffett Foundation was an early investor in Danco. According to a Fox Report, “Weitz has worked at Planned Parenthood, The Bixby Center… and once defined abortion as ‘a moral action undertaken by moral agents.’”

“When the FDA approved the drug in 2000, it did so under a little-known bureaucratic system known as the Risk Evaluation Mitigation Strategy (REMS). Drugs under REMS usually carry significant side effects or are highly addictive, neither of which is true for mifepristone,” the trio wrote. “Under these restrictions, clinicians who provide medication abortion must register with the FDA and then dispense mifepristone directly to the patient.”

They added, “In an effort to reduce the risk of transmission at the onset of the Covid-19 pandemic, the FDA loosened these requirements to allow clinicians to mail the drugs to patients or to use one of two online specialty pharmacies. So the decision this week that health care providers will be allowed to write a normal prescription to be filled at a normal pharmacy is good news.”

In referring to recent changes, the abortion trio added, “this requirement has made it impossible for mifepristone to be available over the counter, or at the very least to be dispensed without unnecessary certifications, despite the fact that it’s safer than Tylenol.” This claim about safety is in dispute, especially given the fact that if women are taking Grossman and the abortion industry’s advice to claim they are having natural miscarriages instead of chemical abortions when visiting ERs with complications, these complications are not being reported against chemical abortions. And one study — which Weitz and Grossman co-authored! — found that chemical abortion is four times as risky for women as a first trimester surgical abortion.

“But that’s where our praise of the FDA ends,” the abortion trio noted, because “the FDA chose to alter rather than eliminate the REMS for medication abortion.”

“Adding pharmacies to the already cumbersome REMS is unnecessary and further perpetuates the notion that medication abortion is dangerous. To become certified to dispense mifepristone, a pharmacy must commit to doing 14 things that go far beyond what they do for other prescribed medications,” they claimed, suggesting it is “essentially a bureaucratic hoop that providers have to jump through that has little meaning.”

The abortion trio referred to the recent move by the FDA as “crumbs and bureaucratic barriers” and demanded the removal of the REMS, writing, “This moment is an opportunity for the FDA to reduce or remove the limits associated with medication abortion, but instead it is changing and even increasing them under the guise of expanding abortion access.”

University of California professor and abortion advocate Ushma Upadhyay, also an ANSIRH professor (and co-author with Weitz and Grossman of the study mentioned above) joined the clamor to demand the FDA remove the REMS, publishing her views at the Los Angeles Times. There, she referred to recent FDA modifications of the REMS as “unnecessary” and “unjustified,” demanding the FDA “remove as many barriers as possible.” In 2019, well before the COVID-19 pandemic, Upadhyay advocated a “no test/no touch” approach where she and her colleagues suggested that abortion providers should simply “believe the woman” about the exact dating of her pregnancy.

But miscalculating gestational age (or not calculating it at all) can have disastrous and litigious consequences.

Referring to Grossman’s op-ed in the Washington Post, ANSIRH reiterated the call and tweeted, “Lifting the in-person dispensing requirement is an important first step to treat #mifepristone more like other drugs, but the eventual goal remains complete removal of the REMS.”

ANSIRH, as previously stated, was co-founded by Tracy Weitz in 2002 with abortionist Felicia H. Stewart, and publishes workbooks on abortion training. ANSIRH is part of a “program within the UCSF Bixby Center for Global Reproductive Health,” which trains abortion providers through its Ryan Residency Training Program. It is no secret that the Packard and Buffett Foundations, original investors in abortion pill manufacturer Danco, have invested in the UC system. In past years, Buffett gave $78 million to UC — and according to the New York Times, is the primary financier of the Bixby Center’s Ryan Residency Program at UCSF.

Bixby and ANSIRH are both funded by the Packard Foundation, which seeded Danco with a $14 million investment in its early days. ANSIRH’s TEACH Early Abortion Training Curriculum was established in 2003 with financial help from the Packard Foundation, which noted that, “In 2002, the Bixby Center launched the Advancing New Standards in Reproductive Health (ANSIRH) Program… to enhance access to abortion. With seed funding from the Packard Foundation, ANSIRH established a Planned Parenthood training site for motivated residents and practicing physicians to learn early abortion procedures. In July 2003, support from an anonymous donor allowed the Center to expand its training initiatives by pioneering the TEACH Project….”

The curriculum’s website also admits that it “receives unrestricted educational grant funding from Danco, LLC,” and has for years.