Every human, no matter his or her stage of development, has potential.

My first question to the pro-abortion folks is, “Just what is ‘it’ that is conceived?” 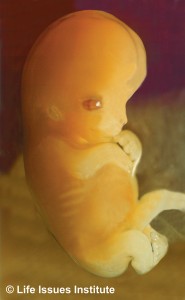 Is “it” an amphibian (since it lives in water) or perhaps a primate? I would argue that “it” is a human, and nothing else. Can any of you convince me otherwise?

Why, then, do we single out a particular group of humans (the unborn) and pronounce that their “potential” is somehow not protected under the same laws that protect every other human in our country?

The Declaration of Independence is clear: “We hold these truths to be self-evident, that all men are created equal, that they are endowed by their Creator with certain unalienable Rights, that among these are Life, Liberty and the Pursuit of Happiness.” These unalienable rights are endowed by our creator, not by government. Creating human beings starts at the moment of conception; it is the first human experience of our lives. From that point on, we are endowed with human potential.

As a tax-paying member of society, I want to pose the next question to everyone – to both pro-life and pro-abortion advocates. “Why should my taxpayer dollars go to fund the ending of human potential against my wishes?”

Right now our government has determined that the unborn are not protected because they are just potential humans who have not yet reached their human potential. So who will be next? Who will be deemed “less than human”? Will it be the aged who are too much of a drain on our wonderful government-funded health care system? Will it be the child with autism or Down syndrome?

We seem to think that all children who are born should be perfect, that human potential can be realized only by perfect humans. What a sad world this would be without all those “imperfect” humans we meet every day. But wait a minute: we are all imperfect humans!