Shortly after taking office in 2021, President Biden issued an executive order instructing HHS to review the rule enacted by the previous administration. In October, the Biden-Harris administration revoked Trump’s protections, announcing their intention to fully restore the funding to abortion businesses beginning November 8, 2021. 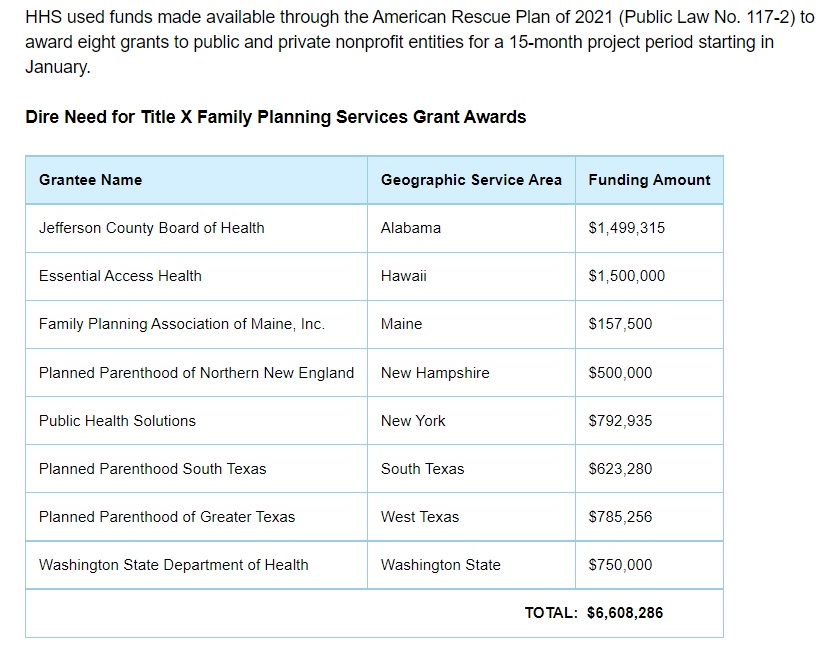 In January of 2022, HHS announced the agency was awarding $6.6 million through the Title X family planning program. Out of that amount, over $1.9 million will go to three Planned Parenthood affiliates and nearly $1.7 million to other organizations that promote or commit abortions:

Live Action News has previously documented multiple abuses by Planned Parenthood, a top Title X recipient funded in past years to the tune of $60 million dollars annually. These abuses include racism and discrimination, a failure to comply with mandatory reporting of child sexual abuse, a failure to protect patient confidentiality, and many others.

In addition to Planned Parenthood, Biden’s HHS is also granting $1.5 million taxpayer dollars to Essential Access Health (EAH) for family planning programs in Hawaii. EAH is a California based organization, which openly works to expand access to abortion. EAH states online that it is not only a member of Gov. Gavin Newsom’s California Future of Abortion Council, but also a “lead trainer and convener of campus health center partners and stakeholders” to support implementation of the state’s SB24 legislation, which forced California colleges to provide abortion access on campus.

HHS has also granted $157,500 to the Family Planning Association of Maine, Inc, which does business as Maine Family Planning and has been part of the Gynuity-sponsored TelAbortion clinical trial, offering the abortion pill to children as young as 10 years of age.

“HHS used funds made available through the American Rescue Plan of 2021 (Public Law No. 117-2) to award eight grants to public and private nonprofit entities for a 15-month project period starting in January,” the HHS release states.

Under the leadership of Secretary Xavier Becerra, a radical pro-abortion advocate, the HHS sent out a release about the 49th anniversary of the Roe v. Wade Supreme Court decision which overruled state laws on abortion legalizing it nationwide. In the release, Becerra claimed HHS is recommitting “to protecting and strengthening access to reproductive health care, including the right to safe and legal abortion care.”

“Patients have the right to make decisions about their own bodies,” Becerra stated, before vowing to have the “backs” of abortion providers. He then added, “In light of restrictive laws across the nation, HHS will evaluate the impact on patients and our communities. That’s why today, I have launched the first Intra-agency Task Force on Reproductive Healthcare Access. Once again, we are telling health care providers and patients, we have your back.”

According to media reports, “The task force’s primary goal is to protect and bolster sexual and reproductive health, including the right to safe and legal abortion care, and will evaluate the impact of what it considers “restrictive laws” in some areas of the country.” The January 21, 2022 news release points to “an unprecedented number of laws enacted, regulations promulgated, and policies adopted that undermine” abortion rights.

The release also claims Becerra’s “task force” is composed of “senior-level HHS officials” who have been instructed to “prepare a plan outlining measurable actions the agency is considering or will take to protect and bolster access to sexual and reproductive health care” — in other words, abortion.