The deceased Indiana abortionist who kept the remains of aborted children in his Illinois home also failed to protect patient records — and he is not alone in this type of negligence. The most profitable abortion business in the nation, Planned Parenthood, has done the same.

A preliminary report published by the Indiana Attorney General found “hundreds of thousands of health records… abandoned in the former clinic locations, storage units and another garage,” belonging to abortionist Ulrich Klopfer, who committed tens of thousands of abortions for more than three decades in several Indiana locations. The Washington Examiner reviewed the report and wrote:

They found Klopfer’s clinics were in similar disarray as his home, with medical records strewn about and not locked up properly. That meant that if anyone were to get into the clinic, they could go through the records easily.

“Health records were intermingled with boxes upon boxes of miscellaneous items, including car parts, rotting food, unsterilized used medical instruments, hundreds of empty soda cans and protein shake bottles, various personal items, and medical supplies — including loose syringes,” the report says of the South Bend clinic. “Some of the health records were soaking in an unidentified liquid and were covered in mold.”

The basement of Klopfer’s Friendship and Family Planning Clinic of Indiana had “suffered severe water damage and was infested by rodents.” Meanwhile, Klopfer’s South Bend, Indiana clinic was littered with “boxes, garbage, and debris” which were “stacked from floor to the ceiling in each room.” Klopfer practiced here while 2020 presidential candidate Pete Buttigieg served as mayor of South Bend…. It is noted multiple times in the report that Klopfer failed to lock his cabinets or properly store medical records. 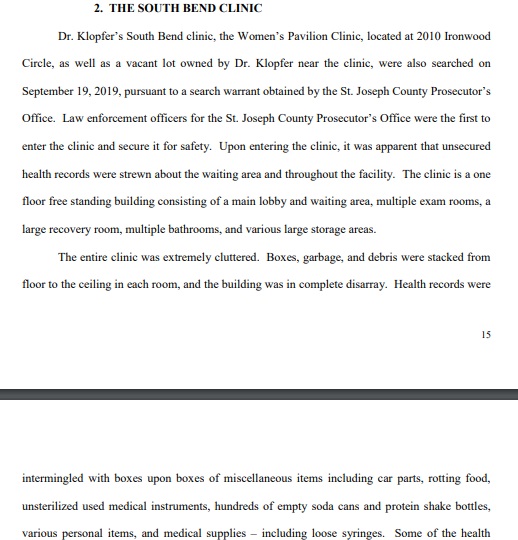 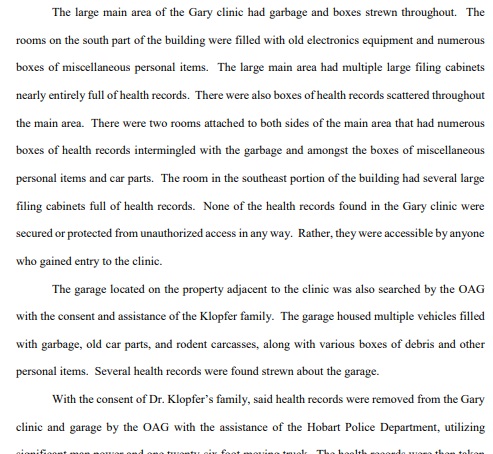 This type of neglect is not rare nor limited to Klopfer. Live Action News previously documented multiple violations of privacy (2016, 2017) under the federal HIPAA law taking place at Planned Parenthood (PP), including massive privacy breaches due to PP’s negligence. This exposed thousands of PP patients.

Just like Klopfer, when Planned Parenthood closed its facility in Dubuque, Iowa, in April of 2016, it carelessly left thousands of private medical records in the center for months, while the building was being shown and was eventually sold. PP of the Heartland reported the breach, affecting 2,506 individuals, in July of 2016. In 2018, PP of the Heartland reported another privacy breach of 515 patients at its Bettendorf center. 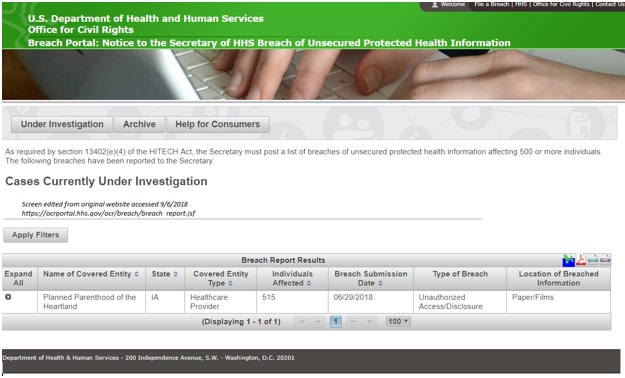 Planned Parenthood of Southwest Ohio Region at PP Elizabeth Campbell Center in Cincinnati left a storage location that housed private prescription medical logs unlocked and as a result, the custodian placed the logs containing personal health information in the trash dumpster, which was later emptied by the trash collector. According to a response from PP’s attorneys, the logs contained patient names, dates of birth, lab results and medication, affecting at least 5,000 individuals. 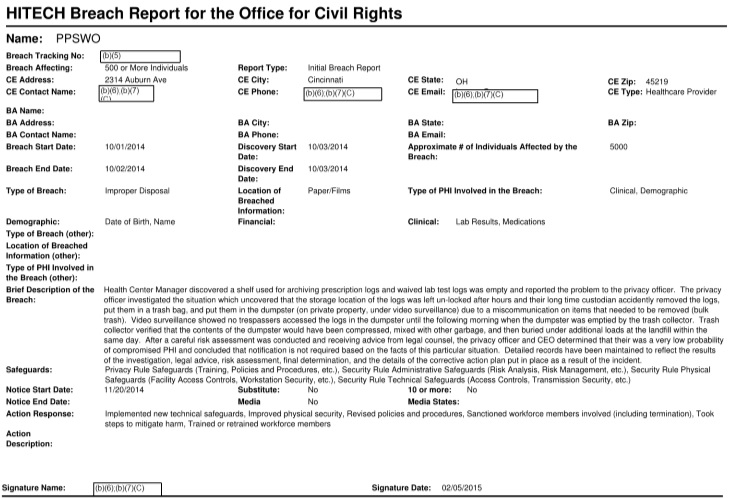 In August of 2016, Planned Parenthood of Greater Washington and North Idaho (PPGWNI), notified patients about a data security “error” of over 10,000 patients, in which e-mails were “inadvertently sent to the wrong addresses.” An online post by PP referred to it as an “isolated occurrence.”

TAB, a records management company working with the Planned Parenthood Federation of America for over a decade, identified what they called “some serious problems” with the records of Planned Parenthood of Illinois, which oversees 17 branch locations. In TAB’s document, they suggested that the corporation’s records were getting lost in the mail and seen by those not employed by PP.

A 2013 Office of Civil Rights (OCR) complaint alleges that a PP staffer in Illinois disclosed medical information to a third party, who posted a message to Facebook which read, “I find it unbelievable that you are scared to cross the street, but were brave enough to kill your own embryo.” OCR decided to resolve case# 14-168325 informally with technical assistance to PP and closed the case without further action. 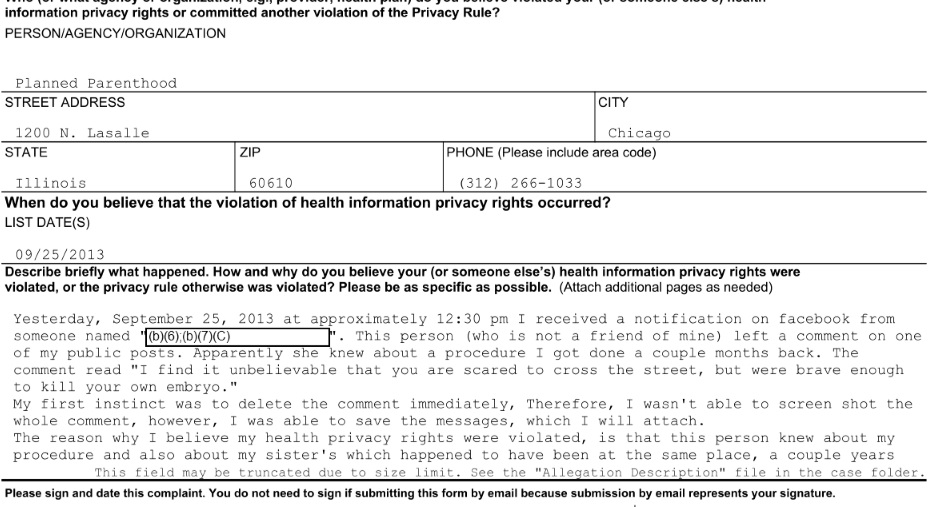 In 2014, a Planned Parenthood patient alleged she went to PP for the abortion pill and a PP staff member texted a mutual friend and told that friend the patient was seen at PP for an abortion. OCR decided to resolve the matter informally with technical assistance to PP and closed case#14-191232 without further action. 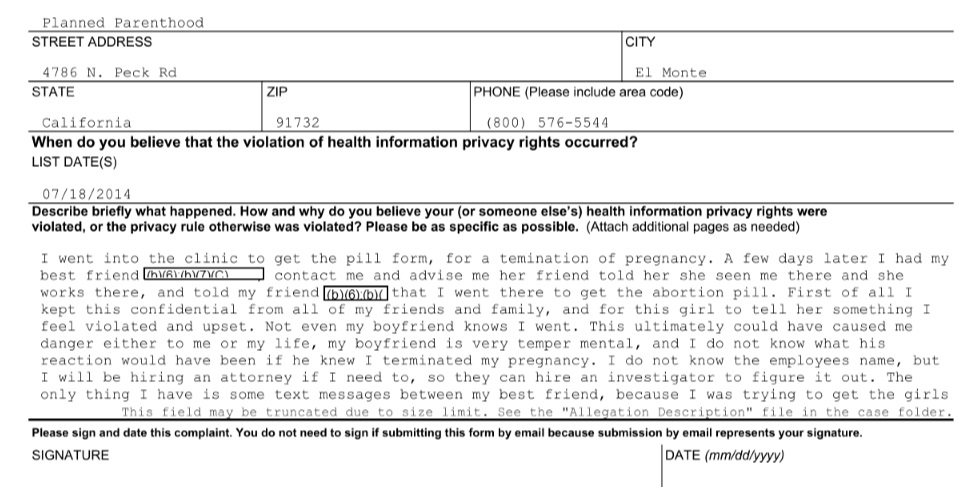 According to HIPAA Journal, in 2016, “the head of the House Select Investigative Panel tasked with investigating the trade of baby body parts by abortion clinics wrote to the director of the Department of Health and Human Services’ Office for Civil Rights requesting an investigation into violations of the Health Insurance Portability and Accountability Act (HIPAA). It is alleged that PP – Planned Parenthood Mar Monte (PPMM) and Planned Parenthood Shasta Pacific (PPSP) – and Family Planning Specialists Medical Group (FPS) improperly disclosed the protected health information (PHI) and personally identifiable information (PII) of female patients to StemExpress.” 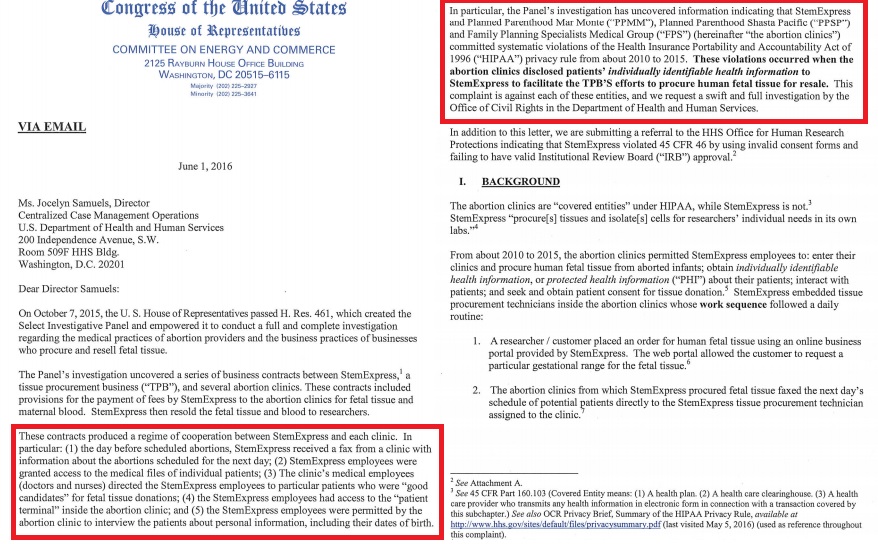 In a lawsuit involving employee misconduct, Planned Parenthood of Minnesota, North Dakota, South Dakota HR manager testified that a PP call center agent was terminated for a reportable HIPAA violation, “A call center supervisor testified that he received an e-mail from another employee… stating that [PP agent] had sent her a chat message stating that [PP agent] had just scheduled E.S.’s cousin as a patient, with a follow-up message stating the cousin’s name.”

The State of Washington’s Consumer Protection Search for Consumer Complaints previously showed two complaints lodged against Planned Parenthood for “privacy abuse” in 2013 and 2014.

This OCR privacy complaint (image below) shows evidence that PP patients — whose parents have insurance to cover health related costs — are sometimes counseled to bill the taxpayer via Medicaid instead. In 2014, this PP patient alleged PP failed to tell them that if they signed up for Medicaid the bill would first go through their father’s health insurance. Instead the patient alleges PP told them the visit would be totally confidential and the father would not be notified. 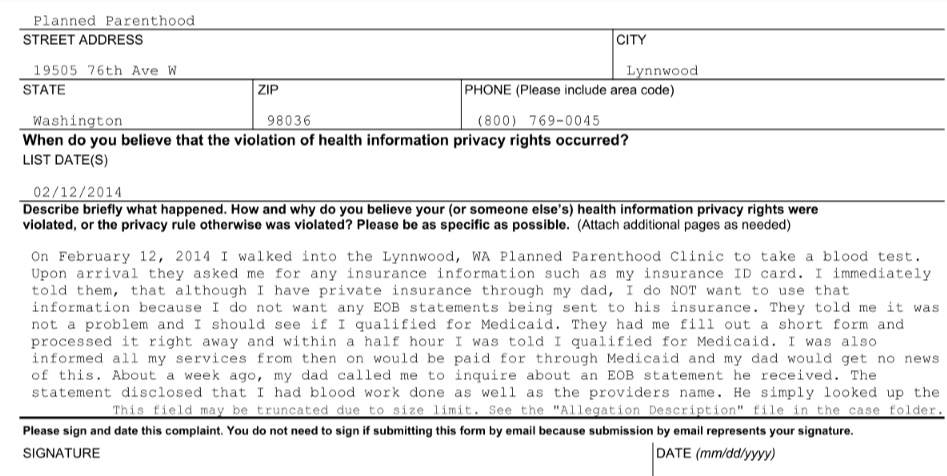