Planned Parenthood’s 2019-2020 report displays a total of 354,871 abortions, which is the highest ever recorded by Planned Parenthood, an increase of almost 3% from the 345,672 abortions previously reported. This represents an almost 7% increase from its abortion totals just over a decade ago, in 2009 (332,278).

Planned Parenthood’s market share of abortions has also increased to over 41%, based on the most recent totals for national abortion numbers reported by the pro-abortion Guttmacher Institute in 2017. 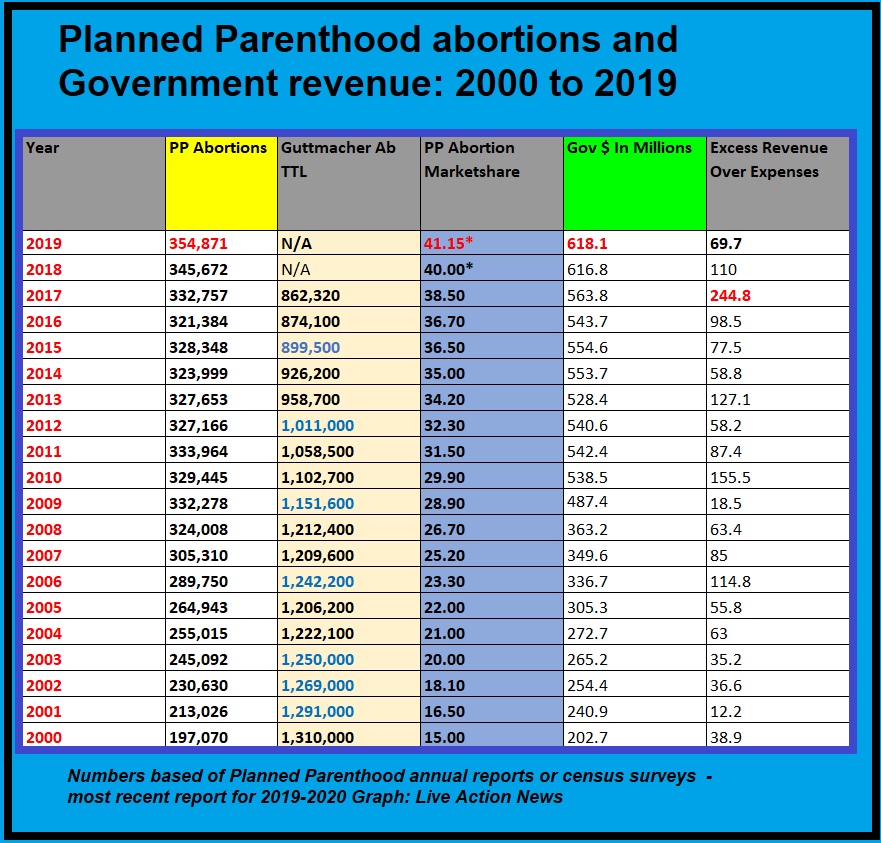 Planned Parenthood’s multiple past attempts to downplay its prioritization of abortion has been debunked many times.

According to the report, only “some affiliate health centers offer primary care services, which may include treatment of acute and chronic disease, minor office procedures, evaluations for referral to specialists, authorization for hospital care, health assessments, and well-person/well-child preventive maintenance.”

According to the report, Planned Parenthood committed over 11 abortions for every “family practice/primary care” service it claimed to have performed.

This category increased nearly 83% (from 9,738 in 2018 to 17,791 in 2019-2020). It is plausible that this increase is likely due to Planned Parenthood’s addition of transgender services. More than 200 Planned Parenthood facilities (a third of the total facilities) in 31 states are now providing hormone therapy for transgender patients.

According to Abigail Shrier, transgender services are a growing business at the abortion giant. In a blog post, Shrier claimed a Planned Parenthood employee told her, “trans-identifying kids are cash cows, and they are kept on the hook for the foreseeable future in terms of follow-up appointments, bloodwork, meetings, etc., whereas abortions are (hopefully) a one-and-done situation.”

A 2020 survey of U.S. abortion businesses revealed that of the facilities that provided the majority of abortions, just 18% offered any kind of prenatal and/or obstetric care. Planned Parenthood is no exception. As Live Action investigations have shown in the past, few Planned Parenthood centers offer prenatal care.

According to the 2019-2020 report, “Contraception clients are those who received contraceptive counseling and care at a Planned Parenthood health center at least once between October 1, 2018 – September 30, 2019.”

Planned Parenthood now receives nearly $1.7 million in taxpayer dollars every single day while ending the lives of over 972 preborn children each day, which equates to one abortion every 89 seconds. Planned Parenthood now commits 41 abortions for every one prenatal care service, and kills 133 preborn babies for every one adoption referral, according to the 2019-2020 report.

Author’s Note: Planned Parenthood initially released their service counts in the 2009-2010 annual report but later adjusted those figures in their Planned Parenthood 2009 annual affiliate service census report – it is the latter that we used to compare ten year numbers here. An analysis of previous annual Planned Parenthood numbers can be found at the links below:

Editor’s Note, 2/25: This post has been updated for clarity on reporting dates.