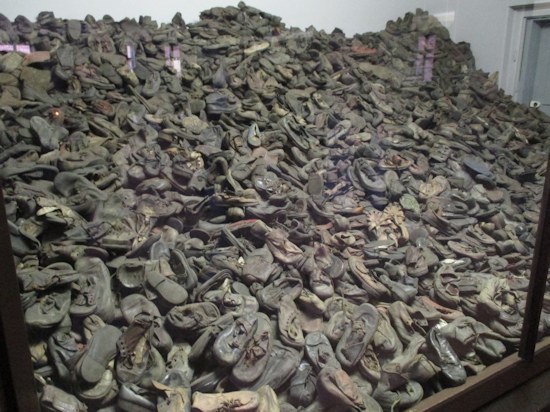 “When I learn about this mass killing process and see the tools and the remains and the pictures…I block the humanity…My heart still is not accepting that each one of them was an individual, intricate, valuable, hand-crafted human being.  But my head knows.  …If I accept the humanity in my heart, what have we done?”

I journaled those words in March of this year, crouched in a bottom bunk in a hostel in Krakow, Poland.  I was not writing about abortion.  I was writing about the Holocaust—writing out of stunned pain and confusion—having spent the day touring the sprawling, well-preserved complex known as Auschwitz concentration camp, a killing machine unlike any other.  Over one million people died at Auschwitz during its five years of operation, the vast majority of them Jewish.  Ninety percent of prisoners who entered Auschwitz died, most by immediate execution in one of the camp’s five gas chambers.

I had walked through an original gas chamber, where 2,000 people could be killed in 30 minutes.  I had gazed at piles of thousands and thousands of shoes—shoes that Jewish men, women, and tiny children had removed just before entering the “showers” to be gassed to death.  I had stood three feet from black ovens with special chutes for shoving in bodies—ovens that created endless heaps of human ash.  The harsh reality—that 1.1 million people had been sanitarily, systematically, efficiently “exterminated” in the very place I had stood was literally beyond my comprehension.    I concentrated on the statistics and blocked the human faces; it was simply too painful.

I visited two other concentration camps the same week: Sachsenhausen and Dachau, both in Germany.   Sachsenhausen (located just outside of Berlin), left me equally reeling with horror.  Perhaps the most horrific part of the camp was the pathology building, where bodies had been stacked high in the basement’s white-plastered holding rooms before being hauled upstairs to be examined by doctors on white-tiled “autopsy” tables.  Each of the thousands of bodies of Sachsenhausen victims was processed through the pathology building before being cremated.  For me, standing in those deathly rooms where everything was bright and shiny white was absolutely surreal.  I was overcome by the stark realization that during the Holocaust, these killings were government-sanctioned; they were overseen by physicians; they were sanitized, euphemized, and standardized.

I gave a speech years ago when I was in middle school that made a comparison between the Holocaust and abortion (not an equivocation, a comparison).  I wrote it after a field trip to the United States Holocaust Memorial Museum (in D.C.) that left me terrified of being apathetic to evil.  A woman who heard the speech told me that any such comparison was very disrespectful to Holocaust victims.  Her words always concerned me, and they kept me from presenting abortion as a modern-day Holocaust with the frequency or vigor I otherwise would have employed.  But after visiting three concentration camps in the span of a week, I am convinced that my listener was totally wrong.  The greatest disrespect I could possibly lend to the victims of the Holocaust is the refusal to apply the lessons of that horrific history to the horrors of today, thus repeating the deadly mistakes of the past.

So, if you haven’t already made the connections, let me be perfectly clear: the parallels between the mass murder of the Holocaust and the over fifty million unborn children legally killed in abortion clinics all across our nation should horrify you.  What are those parallels?  The first is the failure of Americans (even the nominally pro-life) to truly, internally, accept and embrace that the unborn are human, with fingers, toes, smiles, and heartbeats.  The second parallel is the presence of an efficient, perfected, now even legal system of mass murder that exists in the backyards of America’s neighborhoods, with the vast majority of Americans living their daily lives as if this system of killing simply did not exist.  As I journaled the night after visiting Sachsenhausen, between the Holocaust and abortion exist “parallels of sanitized killing, standardized body disposal, euphemized language, government sanctioning, and lack of public outcry.”

Think I’m exaggerating?  The efficient standardization of the abortion industry can best be described in the words of the industry workers themselves:

“I refused to reassemble the body parts after a late-term abortion…tissue was the code word for bodies in our clinic.  We stored them in plastic bags, which were kept in a freezer until they were picked up weekly…The Parts Room, as we called it, was narrow, with washbasins on one side and medical supplies on the other.  Against one wall was a white freezer with the lock broken off… At the beginning of each week, a service truck would come by and pick up the body parts, which were taken to a lab.”

“they would still have to put it [referring to a 23-week gestation baby] in, like, a jar, a container, with solution… all of our specimen have to go out to the lab.”

“so the fetus and everything that goes along with it…they’re cremated, and then the ashes we spread out in the desert…”

And yet, perhaps third parallel between the Holocaust and abortion stands most clearly: public apathy.  The final camp I visited was Dachau, near Munich, Germany.  Dachau was the first concentration camp built by the Germans and was the model camp and experimenting grounds for the hundreds of other camps that followed.  When one method of execution proved too slow, too dirty, or too expensive, the leaders at Dachau would devise new, improved methods to exterminate prisoners and would pass their ideas to the other camps.  Of Dachau, I journaled, “Here, death is a science, a process, something to be perfected and honed.”  But another essential piece of Dachau’s history bears repeating.  Dachau was located quite literally in the backyard of local civilians, most of whom ignored its existence completely.  When the allied troops liberated Dachau at the end of the war, they forced the local German civilians to tour the camp—to walk past the piles of bodies waiting to be cremated—to see the tortures and smell the death that they had ignored.  The civilians were shocked, horrified, and traumatized.

Almost 1800 abortion providers exist in our backyards here in the United States.   One day, I am absolutely convinced you and I will be those Dachau civilians.  In one fashion or another, we will come face to face with the horrors we have ignored.  And just as the civilians of Dachau wept, you and I will weep for our apathy.

…that they may have life.