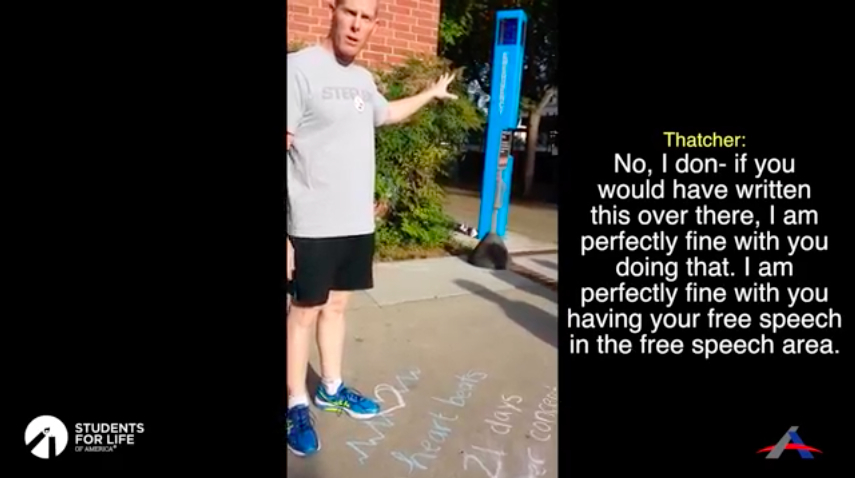 The First Amendment freedom of speech is no longer applicable on a college campus, according to William Gregory Thatcher, an assistant professor of public health at California State University in Fresno.

When Fresno State Students for Life finished writing pro-life messages in chalk on the sidewalk leading to the university library on May 2, club president Bernadette Tasy found other students deliberately editing and erasing the messages. When she questioned their actions, the students replied that they were censoring the pro-life messages at the behest of their teacher, Thatcher, who had previously confronted Tasy about the project. Tasy quickly explained to Thatcher that Fresno State Students for Life had received permission to write on the sidewalk from both Plant Operations and Student Involvement.

Thatcher argued that his stamping out their free speech was a form of free speech itself.

On the contrary, Fresno State President Joseph Castro says “[t]hose disagreeing with the students’ message have a right to their own speech, but they do not have the right to erase or stifle someone else’s speech under the guise of their own right to free speech.” Thatcher also apparently alluded to Fresno having specific free speech zones for students, a policy that was rescinded in June 2015.

Thatcher, whose research centers on youth risk behavior and sexuality, has taught at Fresno for ten years. While receiving an overall good job rating from college students, even the relatively positive RateMyProfessor reviews make note that in the classroom Thatcher “comes off as mean,” “plays favorites,” “teaches in a very biased manner towards his own opinion,” and doesn’t hesitate to make a spectacle out of students.

Among the life-affirming sidewalk chalk messages Thatcher found to be offensive were the following:

“Pregnant? Need Help? Call 800–712–HELP.”
“You CAN be pregnant & successful.”
“Love them both.”
“At 20 weeks, the human fetus can feel pain.”
“Women need love, NOT abortion.”
“Support pregnant + parenting students.”
“The essence of all humanity is inside a fetus.”
“Fetus is Latin for small child.”
“Love them both. Choose life.”
“Fresno State Students for Life.”
“A person is a person, no matter how small. ~ Dr. Seuss.”
“A baby’s heart beats at 21 days in the womb.”
“Unborn lives matter.”
“A fetus has ALL of her organs at 8 weeks.”
“The human baby has his own DNA at conception.”
“Human Rights for ALL: Born + Preborn.”
“Human Dad + Human Mom = Human Baby. Protect Human Rights.”
“Choose life!”
“A heart beats 3 weeks after conception.”
“Brainwaves can be detected six weeks after conception.”
“Save the baby humans.”
“Pregnant? Call 559–446–6295. Free & Confidential Pregnancy Care Center.”
“We believe in maternity leave for all.”
“We support & believe you can be pregnant & successful.”
“Pregnant? You are not alone. There’s help!”
“Life is worth saving, no matter how small, young, old.”
“’We’re all human, aren’t we? Every human life is worth the same, and worth saving.’ ~ J.K. Rowling.”
“Heart beats 21 days after conception.”
“Social justice begins in the womb.”

Alliance Defending Freedom has come to the defense of Tasy and her colleague Jesus Herrera in filing the lawsuit Fresno Students for Life v. Thatcher, arguing that “erasing, obscuring, and defacing Plaintiffs’ expression and in directing students to do the same violate Plaintiffs’ rights under the First and Fourteenth Amendments,” and that Thatcher is violating their First Amendment rights by relegating their liberty to “unspecified speech zones.”

The U.S. government should not support a university that violates U.S. Constitutional rights. In a 2016 revenue statement, California State University in Fresno received $23,063,000 in “noncapital” federal funds.

“Like all government officials, professors have an obligation to respect students’ free speech rights,” says ADF Legal Counsel Travis Barham. “And they should encourage all students to participate in the marketplace of ideas, rather than silencing those with whom they happen to differ. The professor’s actions here represent a flagrant violation of the First Amendment.”

“Rather than countering with his own message, Dr. Thatcher took the illegal approach of censoring speech and inciting students to help in this,” continued Hawkins, whose organization is currently the largest pro-life youth organization in the United States. “No students should have to endure this kind of intimidation and harassment for simply expressing their views, but especially not those who want to help the women betrayed, and the preborn children killed, by the abortion industry.”