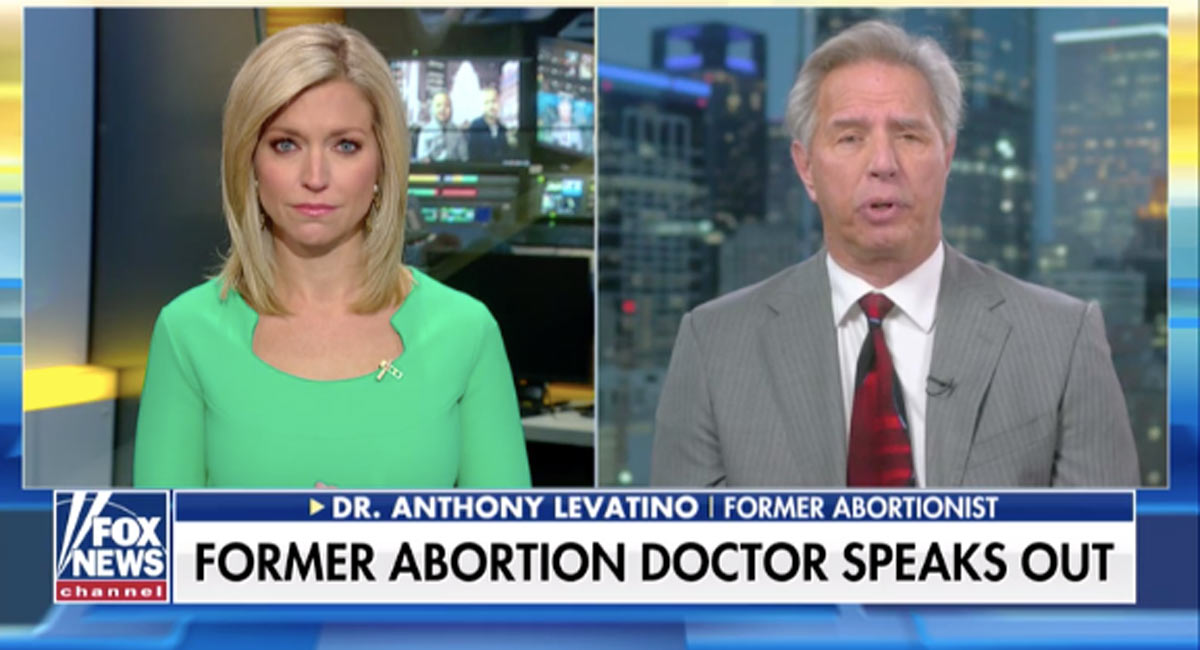 (Life Site News) With the extremes of abortion-on-demand back in the national spotlight, former abortionist Dr. Anthony Levatino appeared on “Fox & Friends” Thursday morning to offer a firsthand view of the subject, with a retelling that left a deep impact on interviewer Ainsley Earhardt.

Levatino is a board-certified OB/GYN who performed more than 1,200 abortions over the course of his 40-year career, but left the industry following the death of his daughter and rose to prominence in recent years as a pro-life advocate. He has offered his expertise to a series of Live Action videos detailing what abortion procedures actually entail, and congressional testimony against the claim that abortion is medically necessary.

“When I graduated from medical school in 1976 I was dedicated pro-choice,” Levatino told Earhardt in the interview. “I was quite dedicated to it, this was a woman’s choice. I was an obstetrician, and I was gonna provide that care.” But his perspective began to change in 1984, after his young daughter Heather was struck and killed by a car.

“If you haven’t lost a child yourself you have no idea, I hope you never find out. But what do you do after a disaster? You bury your child, you try to get back into your life,” he continued, explaining that his first dilation & evacuation procedure after the tragedy was a turning point.

“A second-trimester D&E abortion is a brutal, inhumane procedure. This is a morning show so I cannot describe it, but let’s just say they call it dismemberment abortion for a reason,” Levatino said. “And I started that abortion and just stared at what I had just pulled out of the uterus. When you do an abortion, believe it or not, you have to keep inventory, you have to make sure that you get everything.”

“And for the first time in my career, after all those years and all those abortions, I looked, I really looked at that pile of body parts on the side of the table, and I didn’t see her wonderful right to choose, I didn’t see what a great doctor I was helping her with her problem, and I didn’t even see the $800 cash I just made in fifteen minutes,” he said. “All I could see was somebody’s son or daughter.”

“And it struck me in that moment, that this patient had (figuratively, never literally) came to me and said ‘here’s $800, kill my son or daughter.’ And I was the kind of person who would look her right back in the eye with no hesitation and say, ‘sure, I’ll do that,’” Levatino confessed.

After listening to Levatino’s story in stunned silence, Earhardt spoke up, her voice quivering with emotion.

“Pretty powerful. I’m the mother of a little girl and I look at your little girl Heather and think about Hayden, and I just can’t imagine,” she said tearfully. “Some of these doctors want to do late-term abortions, and I can’t even picture what that would be like.”

Levatino will be next making an appearance in the upcoming film Unplanned, which tells the story of former Planned Parenthood manager Abby Johnson’s pro-life conversion. He plays the abortionist who commits the “procedure that changes Abby’s life, according to filmmakers Chuck Konzelman and Cary Solomon.