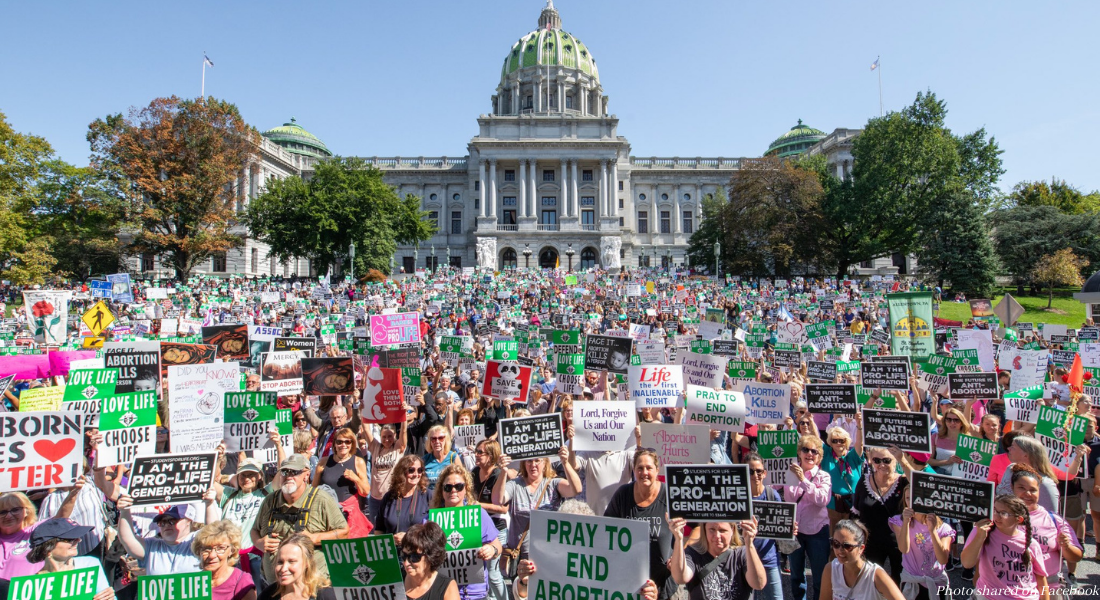 According to various news sources, thousands of people gathered in the Pennsylvania state capital for the first-ever March for Life on September 27, 2021.

The national March for Life organization hosted the event, partnering with the Pennsylvania Family Institute. Participants gathered at the capitol in Harrisburg to call for more pro-life legislation to be passed, then marched around the building. Several pro-life politicians joined as well, such as House Speaker Bryan Cutler and Senate Majority Leader Kim Ward.

Cutler stated, “Life begins at conception and we owe it to the unborn, the voiceless, the most vulnerable among us to make sure that we are their voice and to stand for the right to life at every opportunity.”

Participants also spoke out at the march, affirming the humanity of preborn children.

“We believe that a baby is a baby from conception,” Mike Keleman said, according to Penn Live. “If you follow the science, science says it’s a baby when it’s conceived….”

Carrie Vogelsong works at an organization called Embrace Grace, which helps women experiencing unplanned pregnancies. Vogelsong said she was in a similar position herself when she got pregnant at age 19. She considered abortion, but ultimately chose life. “With all the advances at science, we know that’s a baby. We know that’s life inside a mother,” she said. “I’ve seen it from the side of a woman who was 19 years old and pregnant and I see it from the side, it’s life. It’s a child and we know how precious each life is.”

“This was not a photoshop. This was an actual, palpable measure of the passion on the pro-life side of the divide that separates the humane from the narcissistic, and it clearly had an impact.” @flowerlady61 #PAMarchForLife #WhyWeMarch @jeannemfl @March_for_Life https://t.co/qW7rwA4mB1 pic.twitter.com/e78kGQZceO

Several pro-life bills were introduced earlier this year: a Down syndrome abortion restriction, a bill restricting abortion once a heartbeat can be detected, and a bill giving parents the option of burial or cremation after the death of a preborn child. Governor Tom Wolf vetoed all three and chose to release a statement condemning them on the very same day as the state’s March for Life.

“As I have said before, so called ‘pro-life’ policies are actually anti-choice. They further magnify social and economic disparities within health care, counter the notion of individual freedom and lack a scientific basis,” Wolf said. “As governor, I have vetoed three anti-choice bills that have come to my desk. Make no mistake, I will veto any others. Instead of rallying for policies that have detrimental impacts on commonwealth residents, we should all be focused on policies to support women, children and families.”

Wolf also vowed to veto any other pro-life legislation that passes his desk. Yet the thousands of people who attended the march likewise vowed to keep fighting until that changes. Michael Greer, one of the organizers, said the number of people in attendance shows how strong the pro-life movement in Pennsylvania truly is. In a statement to WHP-TV, he said, “This turnout today exemplifies that people came from every corner of this state today to make a stand for life.”