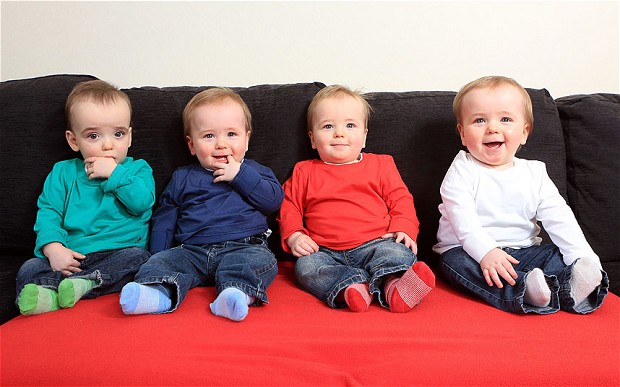 Four, where following bad advice would have killed two. 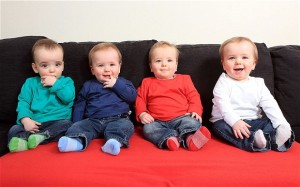 In Bristol, England, a set of quadruplets just celebrated their first birthday. But if their parents had followed the advice of their medical personnel, only two of the children would have been allowed to survive to be born.

Mr. and Mrs. Robbins had a three-year-old son when they found out that Mrs. Robbins was expecting quadruplets, with two of the babies being identical twins.  From the beginning, medical staff encouraged abortion. According to Mrs. Robbins via the Daily Mail:

He [the consultant] told us the risks were so high it would put me in danger and the babies too.

He said we had three options. We could terminate the pregnancy, reduce the pregnancy by terminating some of the embryos, or carry on. Instinctively I clutched my bump. An overwhelming sense of love rushed through me and I told him that we were keeping all four of them.

Termination of two of the children was presented over and over as an option, but Mrs. Robbins knew it wasn’t really an option:

Each time I went to the hospital it was all about the risks and asking me to consider aborting the twins to save the other two babies. But I knew that each time I looked at my surviving babies I’d also be thinking about the ones I’d lost. The thought of it broke my heart.

Again, when she was at 18 weeks, she was told that she had only two more weeks to terminate two children, or it would be too late in the pregnancy. And once again, Mrs. Robbins knew she wanted all four:

By now we’d found out that all our babies were boys and as soon as he’d finished I told him it wasn’t an option and that was final.

We didn’t know how we’d manage financially and practically but I felt it must have happened for a reason. I decided I’d do everything in my power to give birth to four healthy babies.

The babies were born just over a year ago. Reuben weighed 2lb 14oz, Zachary weighed 2lb 8 oz, Joshua weighed 3lb 1oz, and Samuel weighed 2lb 13oz. Mrs. Robbins described to U.K. publication this is Bristol what it was like when she first got to spend time with them the day after they were born:

It was so hard seeing such tiny fragile little beings covered in wires and tubes, but I couldn’t get over how incredible they looked, so tiny but so perfect.

Two months after the quadruplets’ February 29, 2012 birth, Mr. and Mrs. Robbins were able to take their babies home!