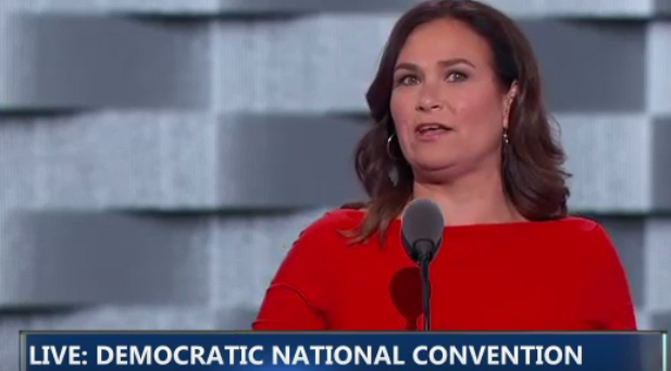 Planned Parenthood President Cecile Richards addressed the DNC Tuesday night; but she wasn’t the only one to take the stage this week to promote abortion.

Upon taking the stage, Hogue presented herself, and other Texan women, as “tough,” and then used the time to promote her own abortion:

I am a fourth generation Texan. Texas women are tough. We approach challenges with clear eyes and full hearts. To succeed in life are the tools, the trust, and the chance to chart our own path.

I was fortunate enough to have these things when I found out that I was pregnant years ago. I wanted a family, but it was the wrong time.

I made the decision that was best for me to have an abortion and get compassionate care at a clinic in my own community.

Her words were met with applause from the audience and cheers.

My story is not unique. About one in three American women have abortions by the age of 45 and the majority of mothers are just trying to take care of the families they already have.

The prevalence of abortion does not normalize the killing of preborn children, and the reason Hogue gives doesn’t, either.Contrary to Hogue’s claims, the one in three statistic has been debunked, but is still unfortunately being promoted. The birth order of a woman’s child should not dictate one’s worth or right to life, as it does not dictate one’s existence as a human being.

During Hogue’s time as president of NARAL, the pro-abortion group has been profoundly anti-woman. The organization has cracked down on pregnancy resource centers, which provide women with abortion alternatives and refer them to health care professionals. NARAL also opposes any and all pro-life laws, including informed consent laws, which do provide accurate information to women about the reality of abortion procedures.

Hogue, however, made it clear at the DNC that what is “outrageous” to the abortion industry is any prohibition on abortion-on-demand, such as banning abortion for reasons of race, sex, or disability. A measure, recently signed by Donald Trump’s VP pick Mike Pence, prevents discrimination against persons still inside the womb. However, Hogue claims Trump and Pence want to “make misogyny great again.”

He has even said he can’t wait to send Roe v. Wade into the ash heap of history. Together, Donald Trump and Mike Pence have united to form the ‘make misogyny great again’ ticket.

Because of Roe v. Wade, an estimated 58.5 million children have been lost to abortion since 1973. For all the pro-abortion hysteria, overturning Roe wouldn’t actually ban abortion— it would give states the freedom and power to decide their own abortion laws.

If a pro-life stance is what constitutes “make misogyny great again,” then Hogue doesn’t know what misogyny is.

Mothers who choose life are already empowered. Just as the abortion movement’s beloved Roe v. Wade botched the truly “cherished traditions of liberty and equality,” Hogue’s statements perpetuate lies. Real liberty and equality gives us all the right to life.