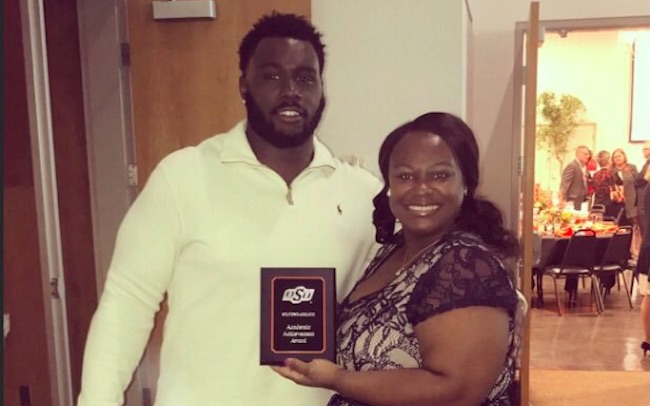 DeQuinton Osborne’s mom had one rule for him before he joined the NFL: get a college degree. Dorothy Osborne knows first hand the hard knocks life can throw at a person — football star or not — and she has remained determined that the son she chose life for, whom she dubs “a miracle,” will be prepared.

At age 36, Dorothy has persevered through more than most will encounter in a full lifetime. She was raped as a young fourth grader, practically homeless as a middle schooler, exposed to parents who were addicted to cocaine, and then, at age 12, Dorothy became pregnant with DeQuinton, whom she gave birth to after her 13th birthday. She explained to The Fort Worth Star-Telegram: “I had those ‘Why me?’ questions. Now, I’m a Christian and I have faith, and everything does happen for a reason.”

Today, her son proudly appears in social media and the news alongside his mother. He wrote, “I love my mother. She my heart, glad I could see her smile. …”

Dorothy’s faith and determination have guided her son, and both are standout examples of what it means to embrace life, no matter the cost. Dorothy explains that, when a school physical exam revealed she was pregnant, the school officials and social workers rallied around her. She had “doctors, counselors and state employees” who came to her side, making it easier for her to choose life. Since she was so young, these professionals sought to find out what had really happened to Dorothy and to provide her with as much aid and support as possible.

DeQuinton Osborne posted this tweet… in line with everything his mother taught him.

But still, Dorothy had to make her own decisions and embrace the strength and grace she is known for today. She chose life, running with the support that was offered to her and learned how to care for her tiny son. As The Sacramento Bee puts it: “Leaning heavily on the direction and advice of school counselors, she took parenting classes and prepared to be a mom. While going to school.” Dorothy said:

I was so young. I just did what I had to do. It was my life. I was so in the moment. He was my focus. At that time in my life, he was the one person I knew who loved me. He was my motivation. It was my son.

Dorothy remained on her own, persevering through it all until DeQuinton was six years old. That’s when Dorothy found the man who would become her husband and DeQuinton’s “Pops.” While the little family experienced more roadblocks on the way, they banded together, and nothing has been able to shake the bond between mother and son.

DeQuinton Osborne posted this photo of him and his mother, Dorothy, on Twitter.

As a young woman, Dorothy achieved a college degree in nursing, but she has continued to push herself to learn more. She is on track to earn her master’s in nursing later this year; the fact that she chose life for her son did not prevent her from accomplishing her goals. Perhaps this is why DeQuinton Osborne listened to his mother when she pushed him to get his grades up in high school. Without higher grades, her son was risking his football career, and Dorothy simply wouldn’t let that happen. “I’m your mom,” she said. “And you will respect me.” Together, they made a plan, and — like his mother years before — DeQuinton pushed through the obstacles that were in his path.

In late April 2018, when he signed with the Dallas Cowboys, DeQuinton tweeted:

Praises to the most high ?? https://t.co/0CEqfB7wIT

The son seems to have made the mother’s faith his own. His Twitter bio proclaims, “God never fails me.” Perhaps DeQuinton feels this deeply because he knows his life was saved early on in the womb because his mother chose life when many other children in similar circumstances are aborted. Many teachers, school officials, and social workers push teen girls — particularly those in middle school — to seek abortion when they become pregnant. Instead, DeQuinton’s mother was led to parenting classes and practical support that enabled her to embrace her son’s life while still succeeding in her own.

Today, her son is showing the world the beauty of his mother’s lessons. Together, Dorothy and DeQuinton Osborne are a vivid illustration of what it means to embrace life, no matter when or how it comes to us.