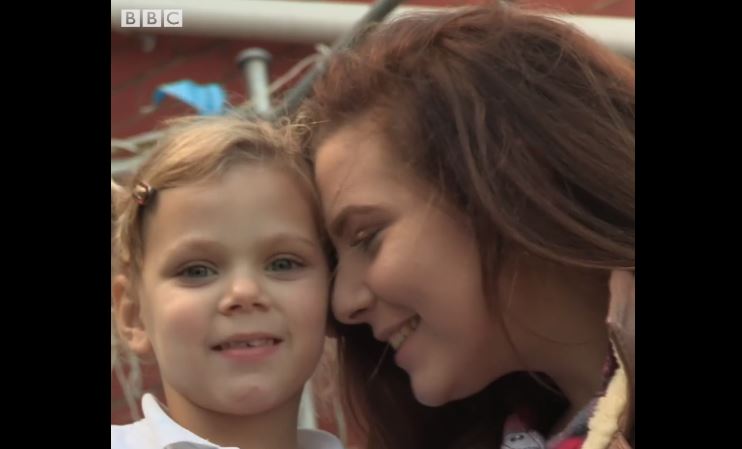 At the age of 14, and feeling that she was “in love” with her boyfriend, Alex found herself pregnant. While teen pregnancy is often considered a reason for abortion, Alex is proving that teenage mothers can be successful mothers and receive an education.

“I got pregnant at 14 but I did better in my GCSEs [General Certificate of Secondary Education] than I would have if I wasn’t pregnant because I felt I had something to prove,” she said in a video for the BBC. “[…] I was never a model student at school, I was never going to get straight As. But I think I did much better than I would have if I didn’t have Nuala because I think that really focused me.”

Alex returned to school just two months after giving birth to her daughter Nuala and in 2015 she received a Level 2 diploma in health and social care. She was able to balance motherhood and her education with the support of her mother, allowing her to achieve goals without sacrificing her daughter’s life or wellbeing. Once Alex finished high school, she felt she could truly embrace being a mother because she was no longer wearing a school uniform.

“Most of my pregnancy I didn’t feel like I could openly enjoy it due to worrying about other people’s judgments and what they would say and do,” she explained. “I couldn’t have done it, quite simply, without my mum.”

Alex’s mother, Sam Thompson, was alerted to Alex’s pregnancy when her younger daughter showed her the positive pregnancy test. At that point, Alex was already 22 weeks along. At this point in pregnancy, an abortion would have been highly risky for Alex, and would have brutally killed her baby girl, who, at that point, could possibly have survived outside the womb:

“One of the things I did say to her was I will support you and be here and support you financially and emotionally but I won’t be getting up with the baby in the night. I’ve still got to hold down a full-time job, I’ve still got my own baby who is only 11. And I never did and I think that made her quite strong – the fact that she had to do it herself.”

READ: Teenage mother: “I choose you even when I wasn’t ready for you”

Alex knows her situation isn’t ideal but also says she loves her life with daughter Nuala, who is now four years old. Her story shows what is possible when girls facing unplanned pregnancies are helped through their struggles and fears rather than shamed into abortion. Alex feared the judgment of strangers during her pregnancy – something that pushes many young girls into an abortion that will haunt them for the rest of their lives. But thanks to the support of her mother, she was able to overcome her fears and face her challenges head-on.

“It sounds horrible but I didn’t have a choice,” she said. “It kind of just happened and I had to go with it and I love my life and I’m really happy and I wouldn’t have wanted it any other way.”