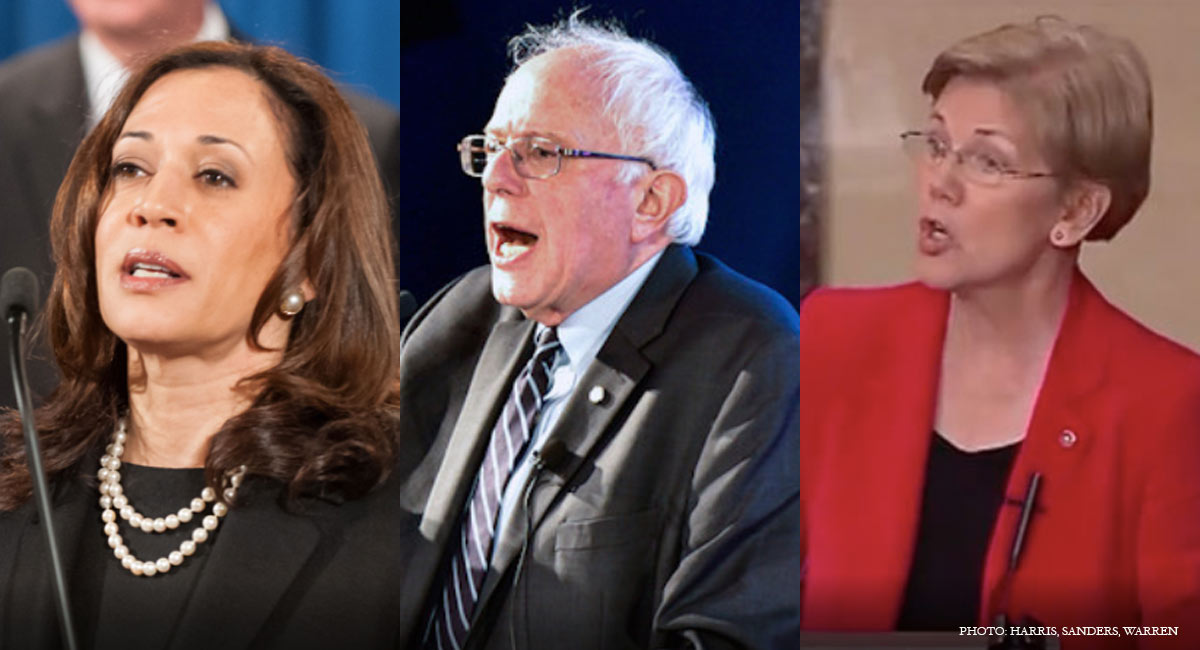 EDITOR’S NOTE: This post will be updated as new candidates enter and leave the race.

It’s only March of 2019, yet already, the race for president in the 2020 election has begun. Numerous Democrats have announced their candidacy, and for many, the election is turning into a referendum on abortion. While it is estimated that at least 20% of Democrats identify as pro-life, and most Americans favor heavy restrictions on abortion, the party continues to become more and more extreme. Currently, there are 14 Democratic candidates running for president; but where do the individual candidates stand when it comes to what is arguably the nation’s most divisive — and important — issue?

Arguably the least well-known candidate, Williamson is an author, activist, and lecturer who was the first to declare her candidacy in January. According to Williamson’s campaign site, she is an ardent supporter of abortion, writing that she is “one-hundred percent pro-choice.” Williamson did not shy away from inflammatory language, either. “In several states, restrictive measures such as the closing of abortion clinics and forced vaginal probes are currently in play,” she said. “Planned Parenthood, a sole source of medical care for millions of women, is under attack in various states in an effort to block the availability of reproductive choice.”

She vowed that, as president, she would fight any restriction placed on abortion whatsoever.

Tulsi Gabbard is a Hawaiian Democrat who declared her candidacy in January. She’s a combat veteran, the youngest person ever elected to the Hawaiian state legislature, and also the first Hindu to serve in Congress. However, like other Democrats, Gabbard is an ardent abortion supporter. She has a 100% rating from NARAL and voted against a 20-week abortion ban, even though she once claimed to be pro-life.

A Senator from Minnesota, Klobuchar is said to be a more moderate candidate for Democrats in the already-crowded field. But when it comes to abortion, she’s not moderate at all. She has received heavy donations from Planned Parenthood, which undoubtedly helped her decision to vote against its defunding. She likewise voted against the Sasse bill on protecting infants born alive after abortion. She holds a 100% rating from the Planned Parenthood Action Fund. She also co-sponsored the Women’s Health Protection Act, which would ban states from setting any restrictions on abortion.

Previously the governor of Colorado, Hickenlooper announced his candidacy in March. While not as outspoken as other candidates on abortion, he opposes pro-life laws, and is a supporter of Planned Parenthood, once saying he could never run on a unity ticket with Republican John Kasich, because Kasich doesn’t support the abortion giant. He also opposed the pro-life Title X rule change, and refused to investigate Planned Parenthood after the baby parts scandal broke.

Inslee currently serves as governor of Washington and is running mainly on the issue of climate change. He is, however, is less concerned about preborn babies. He has previously supported mandatory insurance coverage for abortion in the state, something which finally became a reality in 2018, and like Hickenlooper in Colorado, refused to investigate Planned Parenthood after the undercover videos exposing potential illegal behavior broke.

“Planned Parenthood provides millions of women across the country access to a full range of affordable health care and family planning services. National extremist organizations are engaged in a concerted effort to discredit, and ultimately eliminate, an organization that so many women rely on. Here in Washington state, where we have long fought to protect women’s access to family planning services, Planned Parenthood is on the front lines of women’s health care. I stand with them….” — July 29, 2015

Sen. Gillibrand of New York is vocally pro-abortion, with a 100% rating from NARAL. She voted against the recent anti-infanticide bill, and has sworn to always protect abortion, including late-term.

I voted against the 20-week abortion ban. This bill was nothing more than another attempt by Republicans in Congress to control women's personal health care decisions.

“You can change the direction that this state takes on this issue by not letting them (Republicans) forget 15 months from now when we have an election … We are going to be a strong voice of support for you (senators) and for Planned Parenthood.” — July 11, 2013

Buttigieg is the mayor of South Bend, Indiana, home of the Catholic University of Notre Dame. An Afghanistan War veteran and Rhodes Scholar, he is the first openly gay person to ever run for president as a Democrat. While Buttigieg has not spoken much publicly on abortion, in a Politico profile last year, he remarked that his constituents were concerned about possums in the road, not abortion or Syria — but he does support legalized abortion, and opposes restrictions. When the South Bend City Council approved a rezoning effort that would allow a pregnancy resource center to open near an abortion facility, Buttigieg vetoed it.

“I don’t think we need more restrictions right now… I just believe that when a woman is in that situation and when we’re talking about some of those situations covered by that law, extremely difficult, painful, often medically serious situations where life or health of the mother is at stake, the involvement of a male government official like me is not helpful.” — February 14, 2019

Warren announced her candidacy in February, and her position on abortion is very well known. She has a 100% rating from NARAL, and recently voted against legislation that would require medical care for babies born alive after a botched abortion. She opposes restrictions on abortions, even those that most Americans overwhelmingly support, such as 20-week abortion bans. She has parroted lies about Planned Parenthood in an effort to save the abortion giant’s taxpayer funding.

Cory Booker previously served as the mayor of Newark, New Jersey, and is now a senator representing the Garden State. He is also a hardcore abortion advocate, supporting partial-birth abortion, a position so extreme he lied about it in a debate, and opposes safety restrictions. He’s also an outspoken defender of Planned Parenthood, and like other presidential candidates, voted against protecting abortion survivors.

Representing the state of California, Harris has been a rising star within the Democratic Party since being elected to the Senate in 2017. But she also alienated pro-lifers when as CA Attorney General, she refused to investigate Planned Parenthood for the trafficking of baby body parts, instead prosecuting the Center for Medical Progress — an effort that continues under the new AG to this day. Harris has a 100% rating from the Planned Parenthood Action Fund, and received a congratulatory statement upon her election from the abortion corporation as well. She was one of the co-sponsors of the Women’s Health Protection Act, preventing states from enacting restrictions on abortion, and she voted against a bill preventing infanticide. She also recently made headlines when she questioned judicial nominee Brian Buescher, criticizing his pro-life and religious beliefs.

Bernie Sanders is the dark horse candidate from Vermont, who was an Independent and self-professed socialist, and caucused with the Democratic Party. Sanders is a noted supporter of abortion, receiving a 100% rating from Planned Parenthood and NARAL. He refused to say if there was ever a point in which abortion would be immoral, and voted against the recent bill ensuring that survivors of abortion would receive medical care. He supports taxpayer-funded abortion, and voted against banning partial-birth abortion.

The former representative, who lost his election for the Senate to pro-life Ted Cruz, announced his candidacy in March. Unlike his former opponent, Ted Cruz, O’Rourke is an avid supporter of abortion. He was previously endorsed by NARAL, from whom he has a 100% rating, and supports late-term abortion. He also co-sponsored a bill that would have allowed abortion for virtually any reason until birth.

Unlike many of his fellow candidates, Andrew Yang is not a politician. He’s an entrepreneur, selected in 2012 by the Obama administration as a “Champion for Change,” and then a “Presidential Ambassador for Global Entrepreneurship” in 2015. While he doesn’t have a policy background to back up his views, his campaign website does state that he approves of legal abortion. Whether he supports any restrictions, or if he — like his fellow Democrats — favors abortion on demand, at any time, without taxpayer funding.

Swalwell is a representative from California, and a career politician who announced his candidacy in April. He is ardently pro-abortion, with a 100% NARAL rating, and was endorsed by the abortion advocacy organization last year. He was a co-sponsor for several extremist abortion bills, including legislation that would overturn the Hyde amendment.