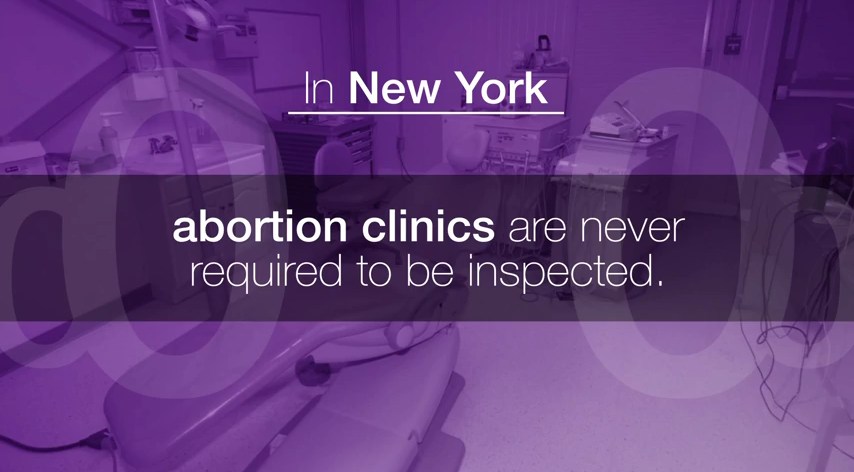 In New York City, there is good reason to believe that your pizza is safer than your local abortion clinic as inspections have been few and far between. A bill in the state assembly, along with a new advertising campaign, aims to change that by asking for regular inspections of the city’s abortion facilities. The bill in the New York State Assembly, A03048 was introduced by Nicole Malliotakis (R-Staten Island). The bill notes:

“A recent Freedom of Information Law (FOIL) request uncovered the fact that only 17 of the 25 abortion clinics in New York had been inspected between 2000 and 2012, and five of those 17 had received only one inspection during that time period. Eight abortion clinics received no inspections.”

The bill would require abortion facilities be inspected by the health department once every two years  and report findings to the governor and legislature, which is in accordance with the policies for restaurants and tanning salon inspections in the city.

The creators of the advertising campaign are also the creators of the NYC41 website. This site was originally created to highlight the 41% abortion rate in New York City (currently at 37%, twice the national average). Now the Chiaroscuro Group, is highlighting another abortion tragedy, the lack of inspections.

Pro-lifers are not the only ones disgusted with these lack of inspections, however. Life Dynamics notes that the ads highlight actual reviews from women who went to the abortion clinics in New York City. Here’s a sampling of what they said: “Filthy.”
“Disgusting.”
“Dirty.”
“The waiting room is dirty.”
“It spells of dried urine.”
“My worst experience ever.”
“Filthy medical equipment, looks like it’s from the 70’s.”
“A dirty, poorly operated clinic with zero care for the patients.”
“She balanced her tool tray on the garbage can.”
“Like something out of a back alley.”
“Don’t go there.”
“Like it hadn’t been cleaned in days.”
“Avoid at all costs.”
“It will cost you – your health.”
“Poorly operated.”
“One of the worst experiences I’ve ever had.”

As the bill’s sponsor, Malliotakis , says, this bill isn’t about being pro-life or pro-choice:

“This is legislation everyone should get behind — whether you’re pro-life or pro-choice. If you require biennial inspections for tanning salons, why wouldn’t you do it for abortion clinics?

“This measure should acquire broad consensus as the intended goal is to afford women the proper protection and higher standards befitting a facility that conducts such sensitive procedures.”

Sadly, this is the second report on areas with uninspected clinics with dangerous sanitary conditions in the last month. The state of Illinois also puts women at risk by not inspecting its clinics. In contrast, both New York City and the state of Illinois inspect their tanning salons on a regular basis, as well as their restaurants.

So eat a pizza in New York or Chicago, and even get tan for summer, but if you want an abortion, realize that you aren’t only taking a baby’s life, but putting your own at risk as well. One unsanitary object placed inside a woman can spiral into a nightmare of infection, complications, and even lifelong health problems.