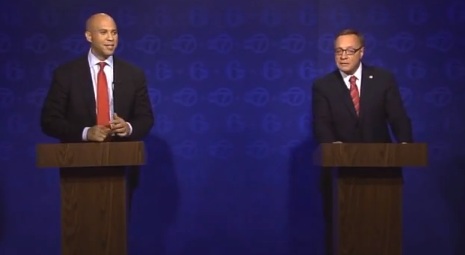 Cory Booker, Mayor of Newark, New Jersey and the Democratic candidate in the 2013 New Jersey Senate election, has been caught in a lie about his abortion stance twice.

The pro-abortion politician has been outspoken about his support of Roe v. Wade, but in his attempt to win the Senate seat of the late Frank Lautenberg, he has gone to extreme measures to win the endorsement of NARAL and the votes of New Jersey pro-aborts.

In a debate last week with Republican rival Steve Lonegan, Booker seemed shocked by Lonegan’s claims that Booker supports abortion throughout the entire pregnancy, as well as the complete tax funding of abortions at any stage for any reason. In a recovery attempt, Booker stated that he supports the “law of the land as it is right now” in terms of abortion restrictions. If this were true, it would mean that Booker supports the partial-birth abortion ban as well as the Hyde Amendment, which prohibits the federal funding of abortion. But it turns out that Booker was lying and that Lonegan was the one who had the facts straight.

Booker’s lies became known when his campaign accidentally posted a private “endorsement memo” to abortion giant Planned Parenthood in an open Google group. In the memo, Booker writes, “I oppose the Partial-Birth Abortion Ban Act and the Supreme Court’s dramatic break from precedent in upholding it.” This is the direct opposite of what he said Friday night during his debate.

In addition, after Booker filled out a NARAL questionnaire while seeking an endorsement from the group, he was coached by NARAL on how to change at least one specific answer to be more in tune with the group’s pro-abortion goals. When it comes to the funding of abortion, NARAL instructed Booker to revise his original answer because it didn’t show enough support for taxpayer-funded abortion. As Eliana Johnson reports for National Review Online, Booker changed his answer, making it clear that he supports the funding of abortion by Medicaid, Medicare, and Indian Health Services – again, in direct contrast to what he said in the debate.

Mayor Booker has clearly aligned himself with the most pro-abortion groups in the nation, Planned Parenthood and NARAL, and will stop at nothing to undo restrictions set on abortion…and lie about his intentions in the process.

Booker just returned to his campaign after the death of his father on Thursday. The special election to fill Lautenberg’s seat will take place on October 16.