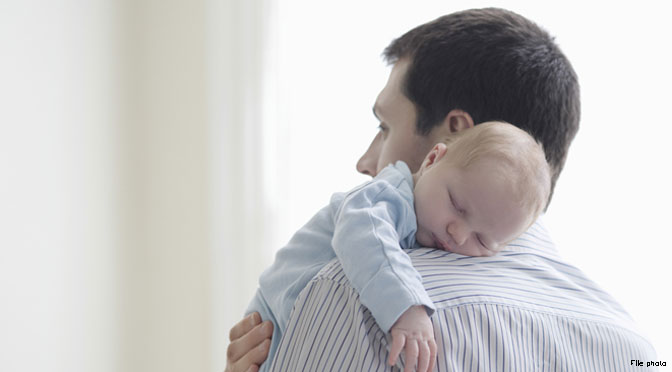 Three years after a British father delivered his first child at home, he was forced to spring into action again when his wife, Natalie, gave birth en route to the hospital. Dominic Lister had to pull over and deliver baby Alice himself after the little girl decided she was ready to enter the world.

“About 10 pm in the evening, Natalie comes in and tells me that her waters have gone so I put everything in the campervan as it was at the end of the drive,” he explained, according to the UK Mirror. “We set off to hospital but a road was closed and we were diverted as a lorry in front of me went along at what felt like 10 mph.” Natalie soon realized that the baby was on her way, forcing Dominic to pull over.

“We go onto the A60 and that was coned off. We stopped and I was talking to the workmen. She opened the door and she said the baby was coming now. I thought ‘oh no, here we go again’. It was just a case of keep calm and carry on.”

Despite the less-than-ideal circumstances, the delivery went smoothly, and both Natalie and Alice were fine thanks to Dominic’s help. Dominic, a funeral director, credited his career with helping him to stay calm despite the situation. “It’s certainly very different to my day job. It’s the opposite to what I do really but I think being a funeral director actually helped with staying calm,” he said. “My daily role involves me being calm and reassuring. It takes many years of experience. But helping deliver my own child is not something that I ever expected to have to do.”

In fact, it’s the second time that he’s delivered his own baby. According to Yahoo, the couple’s first child, Elliot, also decided to make a swift entrance into the world three years ago. When the couple realized that they would not be able to make it to the hospital in time, Dominic called emergency services for help. “It happened very quickly. The gentleman at the ambulance control center talked me through what to do,” he explained. “Knowing the ambulance was on the way was good. [Elliot] arrived at 10:50 am and two minutes later the crew arrived. I was a little bit in shock and I never dreamed I’d have to do it again.”

Natalie commented on both special deliveries. “It will be such a nice story to tell the children when they grow up; it’s unique but definitely not what we planned,” she said, according to the Daily Mail.

Dominic also reflected on the unusual position he’s been in for both of his children. “To have done it twice is very special. I’ve been the first person in the world, for a brief moment, to have held them.”