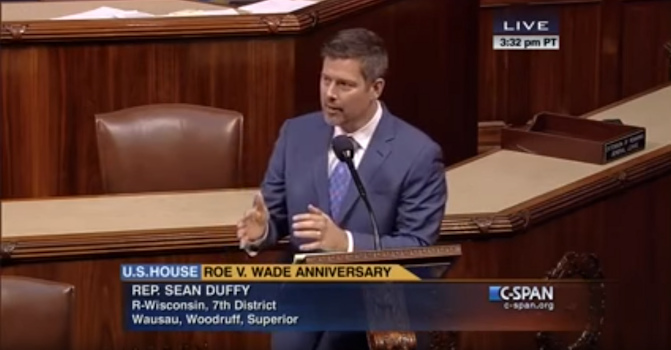 Duffy declared in his speech, (which can be seen below):

“My friends, liberals, Congressional black caucus members, they talk about fighting for the defenseless and the hopeless and the downtrodden but there is no one more hopeless or defenseless than an unborn baby. But their silence is deafening.”

Duffy cited the high abortion rate among minorities and asked members of the Congressional Black Caucus why they were not speaking out about “how their communities are targeted in abortion.” Moore, who is black, took offense to the pro-life comments.

“After nearly 30 years in public office, not much surprises me anymore,” said Moore. “So you can imagine my lack of astonishment when my dear friend and colleague from Wisconsin, Sean Duffy, rolled out abortion statistics among African-American women to lecture black legislators like me about defending the welfare of our constituents.”

Moore went on to call Duffy’s comments “offensive” and accused him of “hypocrisy.”

Duffy contends that his comments were not an attack on Moore or any of their colleagues, but rather “an invitation to work together to defend poor, minority women against a powerful industry that targets them and preys on their vulnerability.”

“It’s worth noting that Rep. Moore did not refute the harrowing statistics – more African-American abortions than live births in NYC – because they are irrefutable,” he added.

Duffy told The Blaze that Moore has met his Latina wife and their seven children, and that Moore is aware of his “passion for helping minority communities access the American Dream.”

Rep. Duffy has a long history of supporting the right to life, including co-sponsoring a bill to defund abortion giant Planned Parenthood and consistently voting to block taxpayer funding of abortion. Lila Rose, President of Live Action, released a statement supporting Duffy, saying:

“The disproportionately high numbers of abortions and abortion clinics in minority communities clearly support Rep. Duffy’s statement that abortionists target black communities.  Live Action’s undercover video investigations have caught Planned Parenthood on multiple occasions all too willing to accept donations specifically given to abort African American children.  To this day, Planned Parenthood continues to celebrate its founder, Margaret Sanger, who talked about the need to ‘exterminate the Negro population.’

“Rather than shoot the messenger, the Congressional Black Caucus should welcome Rep. Duffy as an ally in helping to stop this travesty against African American children and all children.

“Rep. Duffy is not only advocating for children who have no voice, but for their mothers when he points out the violence that abortion does to them as well.

“Rep. Duffy is being attacked and lied about because of the extreme pro-abortion interests of some members of Congress, no doubt fueled by the fact that collectively, current Congressional Black Caucus members have received over $400,000 in campaign contributions from the abortion lobby.

“It’s extremely tragic that some members of Congress who claim to speak for the human rights of black people are against the right to life for preborn black children and are trying to silence voices that expose the catastrophic consequences abortion has on the black community.”