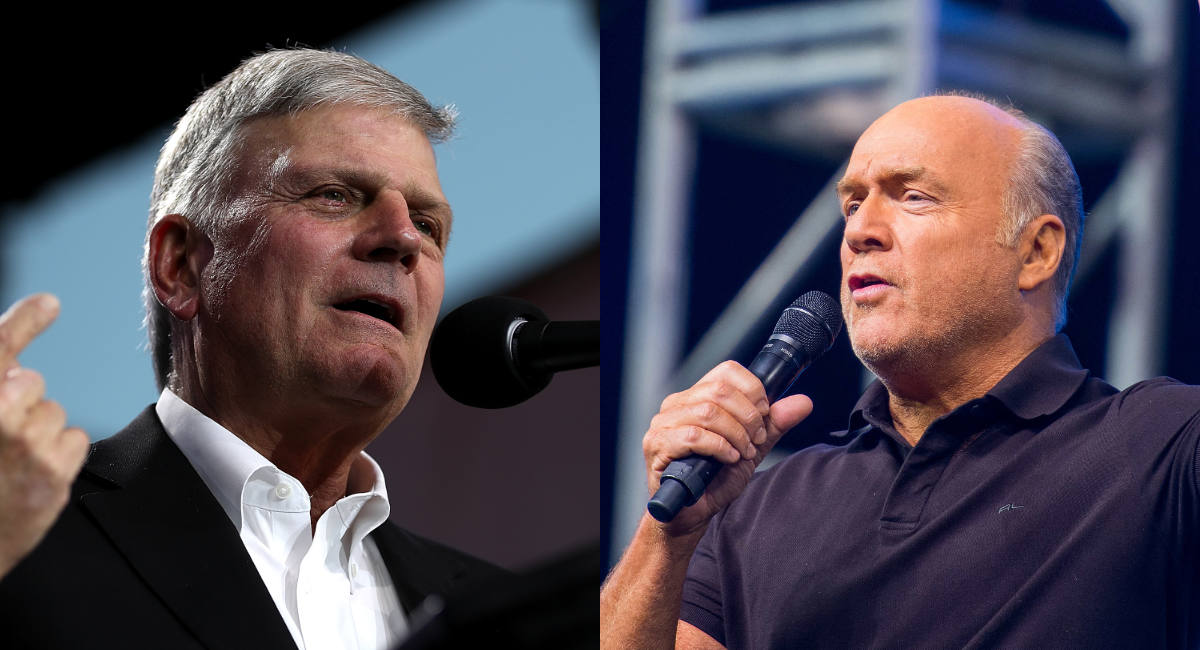 Many Christian leaders are reacting with joy to the news that Roe v. Wade has been overturned more than 49 years after the Supreme Court ruled that states must legalize abortion through at least 24 weeks of pregnancy. The Supreme Court ruled on Friday in Dobbs v. Jackson Women’s Health Organization that the Constitution does not hold a right to abortion. Based on this decision, pro-life states are now able to protect innocent human lives from violent deaths, but pro-abortion states are allowed to keep the slaughtering of preborn human beings legal through all nine months of pregnancy.

Pastor Rick Warren shared an illustration of a preborn baby on Twitter with the caption, “The Supreme Court has overturned ROE v WADE ending the federal support of abortion! Millions of unborn Americans say thank you!”

Catholic author, speaker, and television host Chris Stefanick tweeted the news, saying, “On the Solemnity of the Sacred Heart of Jesus, Roe v Wade is no more!”

https://t.co/05WwtoBcsj
On the Solemnity of the Sacred Heart of Jesus, Roe v Wade is no more!

He followed that tweet with a Twitter thread dispelling common myths about abortion and about pro-life individuals. In the thread he wrote, “I’m against abortion largely because I hate what it does to the women who feel pressured by the ease, to get one. They live with the regret and pain. For a true Christian, to be pro life is to be pro woman. The two are one.”

Pastor and evangelist Greg Laurie also celebrated the end of Roe, saying on Twitter, “#SCOTUS has overturned Roe V Wade. Although we cannot bring back the lives we have lost, a great injustice has been corrected today. Countless lives have been saved by this decision. Thank God! Now more than ever before, the church must prioritize caring for mothers and children.”

#SCOTUS has overturned Roe V Wade. Although we cannot bring back the lives we have lost, a great injustice has been corrected today. Countless lives have been saved by this decision. Thank God!  Now more than ever before, the church must prioritize caring for mothers and children

Biola professor, author, and Christian apologist Sean McDowell tweeted, “ROE is overturned. Amazing. I honestly never thought I would live to see the day.” He also released a video, in which he said, “the reality is, at least some unborn human beings will live,” adding, “This doesn’t mean that the game is over… the real battle is in the hearts and minds of people, to show that every life has value. So celebrate, take in the moment, but in some ways, our work for the unborn has just begun.”

Christian author, pastor, and Passion Conferences founder Louie Giglio took to Instagram using scripture to celebrate the ruling. He wrote, “Today’s monumental ruling helps protect the rights of those who cannot yet speak for themselves, yet who bear the image of the God who knew them before He formed them in the womb.

“As well, this decision must awaken compassion and care for moms, dads and babies on an unprecedented level, at which the Church must rise to the forefront to demonstrate the love of Christ.”

The image he shared states, “Before I formed you in the womb, I knew you, before you were born I set you apart; I appointed you as a prophet to the nations.”

Evangelical leader Franklin Graham announced the end of Roe on his Facebook page. “Roe v Wade, passed 49 years ago, has resulted in the deaths of over 63 million innocent children in this country. Sadly, this decision is not an end to abortion — it pushes the battle back to the states. My prayer is that every state will enact protections for children in the womb and that our nation will value and recognize the rights of our most vulnerable,” he wrote. 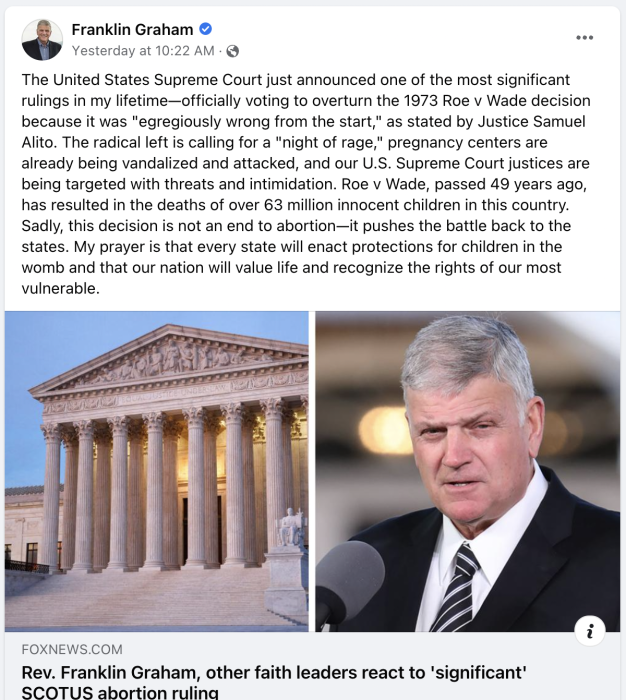 Brent Leatherwood, acting president of the Southern Baptist Church’s Ethics & Religious Liberty Commission, said in a statement, “The release of the Dobbs decision marks a true turning point in the pro-life movement, a moment that Christians, advocates and many others have worked toward tirelessly for 50 years. … As this chapter comes to a close, we must understand this is not the end of our important work. The issue of abortion has now been turned over to the states, many of which have either implemented or are considering some of the most abhorrently permissive pro-abortion proposals ever.”

Los Angeles Archbishop José Gomez, president of the U.S. Conference of Catholic Bishops and Baltimore Archbishop William Lori released a joint statement stating, ““This is a historic day in the life of our country, one that stirs our thoughts, emotions and prayers. For nearly fifty years, America has enforced an unjust law that has permitted some to decide whether others can live or die; this policy has resulted in the deaths of tens of millions of preborn children. … We mourn their loss, and we entrust their souls to God.”

Likewise, San Francisco Archbishop Salvatore Cordileone, who has told Nancy Pelosi she may not receive Holy Eucharist until she repents of her abortion support, said, “This historic Supreme Court decision would not have happened without fifty years of patient, loving, hard work by people of all faiths and none in diverse fields including social service, religion, law, medicine, culture, education, policy and politics. But our work has just begun.”

The Bishops of the United States thank God for Friday’s Supreme Court decision overturning Roe v Wade, the 1973 ruling “which legalized and normalized the taking of innocent human life” through abortion.https://t.co/iND4G5g5T4

In addition, the U.S. Conference of Catholic Bishops Respect Life tweeted, “Legal protection must be accompanied by more care for mothers and their children. The Church is redoubling efforts to accompany women and couples who are facing unexpected or difficult pregnancies, offering them loving and compassionate care.”

Legal protection must be accompanied by more care for mothers and their children. The Church is redoubling efforts to accompany women and couples who are facing unexpected or difficult pregnancies, offering them loving and compassionate care. Learn more: https://t.co/YQVqu7B2tP pic.twitter.com/GpfKjuX02c

Pastor Mike Winger of BibleThinker.org wrote on Facebook about the different reactions to the overturning of Roe. “You have those who think it’s a huge disaster that women don’t have the federal government saying that crushing a baby’s skull, chopping her into pieces and sucking her out of the womb is a civil right.” He adds, “Then you have another group. The sideways people. They aren’t EXACTLY opposed to the ruling. But they seem a bit bothered. They think that this is the moment when we need to remind people of how fruitless legislation will be, or how pro-life folks “really need to start doing this other thing…” as if the real issue has always been with pro-life people and the good deeds they fail to perform for those who are tempted to kill their offspring.” He also notes, “Then there are those who generally celebrate this decision.”

He wants others to take note of the “sideways people.” He says their posts and comments are usually based on ignoring the actual truth of what abortion is — killing human beings — “and turning sideways to focus on other issues.”

“Those other issues my be important, or they may be gaslighting, but what’s important to notice is how those other issues are being USED,” said Winger. “They are being used to, at any cost, get attention away from protecting babies. By generally downplaying the fundamental moral issue that it’s not oky to kill your baby they have the same effect as the pro-choice groups that propagate their agenda by just pretending it’s about a woman’s body. It all comes down to turning our faces away from the blood that’s being shed.”