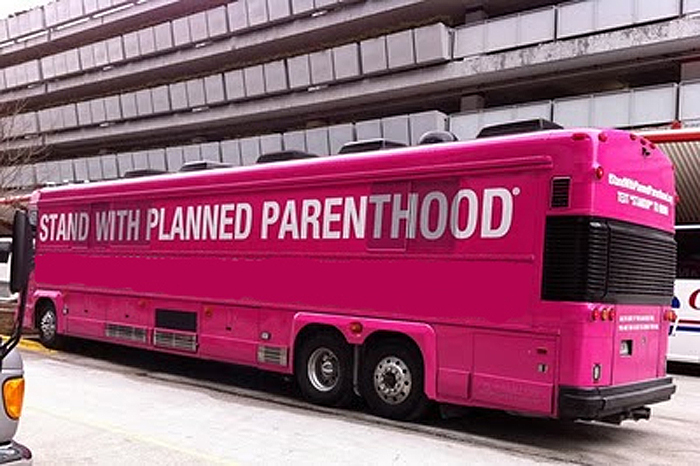 One of the most strongly held beliefs in the Catholic Church is that of the sanctity of life. This is why you cannot be Catholic and also be pro-choice… or, more accurately, pro-abortion. Yet there are those who think they can ignore the Church’s sanctity of life teaching and still be Catholics in good standing. Even worse, some of those people use their faith to try to convince other people to stray from Church teaching and promote abortion.

And that’s exactly what Catholics for Choice just did. They just took out a two-page ad in Politico urging Americans to stand with abortion behemoth Planned Parenthood. The ad, presuming to speak for all Catholics, read…

Just imagine a world without Planned Parenthood. It is a world where a dark, harsh landscape is all that remains for women who already have so little. Where a mother in Chicago works extra shifts to pay for groceries, but can’t afford contraception. Where a woman in the Appalachian hills takes several buses to a clinic, only to be told she cannot have her procedure and must come back. Where a woman in Tupelo with a family history of cervical cancer can’t go to a reliable health center for yearly Pap smears. Where a boy in Utica isn’t offered sex education at his school and cannot turn to a quality healthcare provider for information or services when he contracts an STI.

Without Planned Parenthood, the least among us would have even less. It would rob us of compassionate caregivers and educators. It would punish the most vulnerable, taking away their ability to make reproductive decisions according to their own conscience. It’s a sin to hold a conscience captive. Catholics believe that a conscience is a status symbol. We believe everyone has the ability to decide to be pregnant or not, and to protect oneself from sexually transmitted infections. Our laws should make this possible for everyone, no matter what their means, where they live or what they believe.

We, your fellow legislators and constituents, urge you to stand with those who need Planned Parenthood, to oppose any attempt to defund and to listen to Catholics. Listen to the majority of Americans who recognize the critical importance of Planned Parenthood.

We envision a world where a woman at risk of cervical cancer can get the care she needs from the people she trusts. Where rural women can get abortion care without extra days off work, expensive travel or waiting periods. Where the gap between poor women’s and privileged women’s health closes for good. Catholics for Choice likely uses the word “choice” because Catholics for Abortion sounds too extreme, or something. But make no mistake: they are pro-abortion to the extreme. They mocked the United States Council of Catholic Bishops after the USCCB fought against the Obamacare birth control mandate, using a litany of pro-abortion talking points. And the slobbering defense of Planned Parenthood? There’s a good reason for that. They netted themselves a $300,000 grant from the Ford Foundation a few years back – and who serves as both a trustee for the Ford Foundation and as chairman of Ford’s finance committee, thereby holding considerable sway over where money gets sent? None other than Cecile Richards herself, president and CEO of Planned Parenthood. Needless to say, there’s a conflict of interest there. No one intellectually honest person could make the claims about Planned Parenthood that Catholics for Choice just did.

They lie about the services they provide, probably to hide the fact that Cecile Richards’ leadership has led to the plummeting of actual health care services at Planned Parenthood. Breast exams, cancer screenings, Pap smears, prenatal care – all of it has dropped drastically over the years. Abortion, meanwhile, has skyrocketed.

And the reality is that Planned Parenthood serves a very, very small number of American women. And it turns out that Americans actually do support defunding Planned Parenthood and redirecting the money to those comprehensive health clinics instead.

As for sexual education, Planned Parenthood’s idea of that is rather disturbing. They have been known to promote harmful and abusive sex practices to teenagers, including sadomasochism, drinking urine and playing with feces, beating your partner, and more. Given that, Planned Parenthood is likely the last place a parent wants their child going for sex ed:

So were Planned Parenthood to just magically disappear tomorrow, there wouldn’t suddenly be a “dark, harsh landscape” left for women. It could be argued that they would be better off.

Catholic or not, there’s no reason to trust Planned Parenthood, let alone support them.