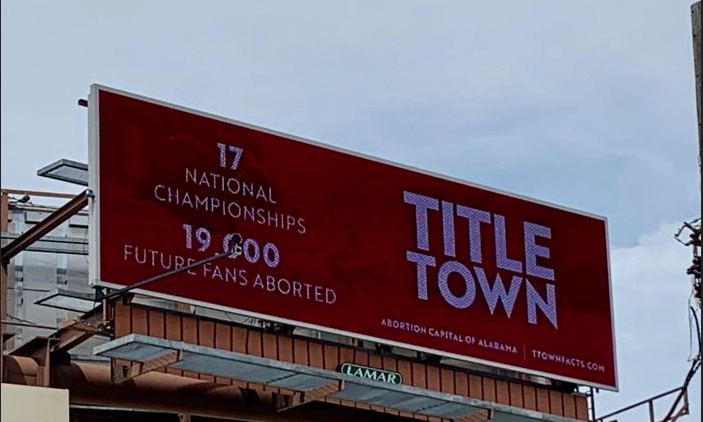 A billboard in Tuscaloosa, AL is claiming that 19,000 future fans of Alabama football have been killed by abortion in the city. It calls out Tuscaloosa as being the “Abortion capital of Alabama.”

“17 National Championships, 19,000 future fans aborted,” says the billboard in reference to the 17 national titles won by the University of Alabama football team and the number of preborn children killed by abortion in Tuscaloosa. “Title Town Abortion Capital of Alabama.”

The billboard includes a website address: TTownFacts.com which not only provides the numbers on abortions in the state of Alabama and the city of Tuscaloosa but also shares information on abortion procedures.

According to AL.com, the billboard was first noticed on Friday morning August 9 and shared by Twitter users. It reignited the debate on abortion laws in the state, specifically the law that passed in May which makes abortion a felony for the abortionist except in cases of medical emergency or the mother’s life is at risk – (abortion is never actually medically necessary) – or the preborn child is considered incompatible with life – (which is an act of eugenics).

Lamar, the company that owns the billboard, says that it was purchased by an anonymous buyer. There is no information available on how long the billboard will be up.