In the recent Vice-Presidential debate between Republican candidate and current VP Mike Pence and Democratic candidate Senator Kamala Harris, references were made by Harris regarding the need to listen to “science” when determining public policy. In response, several abortion advocacy groups echoed the sentiment on social media.

Planned Parenthood’s political action arm tweeted, “Vote for the person on the stage who will listen to science and health experts. Every time.”

NARAL Pro-Choice America — with its own history of eugenics and present-day charges of racism — tweeted, “We’ve seen a pattern with [the Trump] administration. They don’t believe in science. But you know who does believe in science? Kamala Harris and Joe Biden.”

Even abortionist Daniel Grossman suggested in a tweet that VP Mike Pence denies the “science” surrounding abortion. Grossman — who directs a group funded by the abortion pill’s manufacturer and who presides over abortion pill expansion trials — neglected to point out that the study he referenced was heavily funded by global abortion supporters. 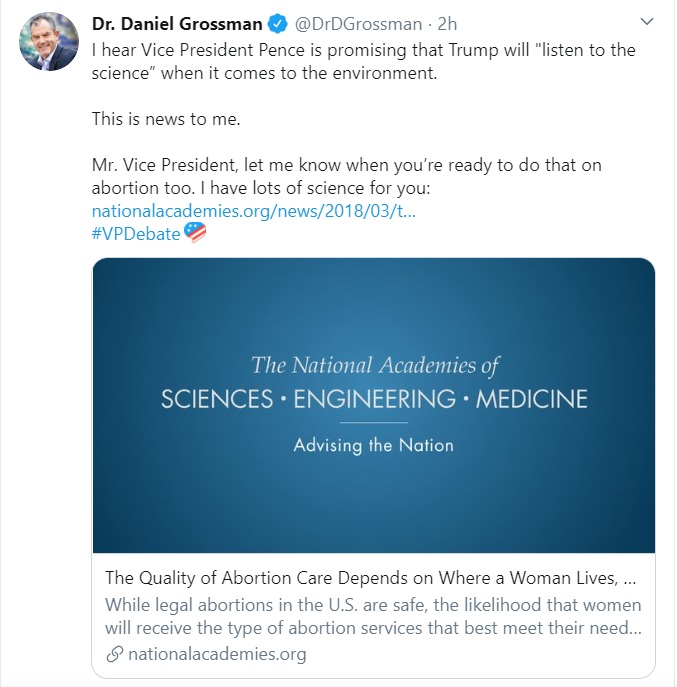 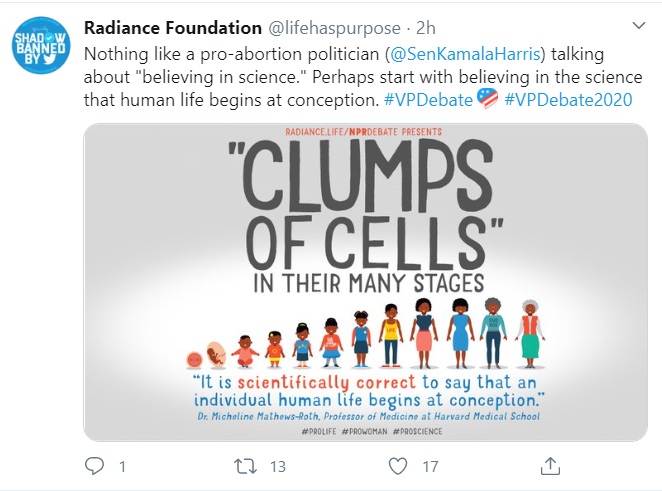 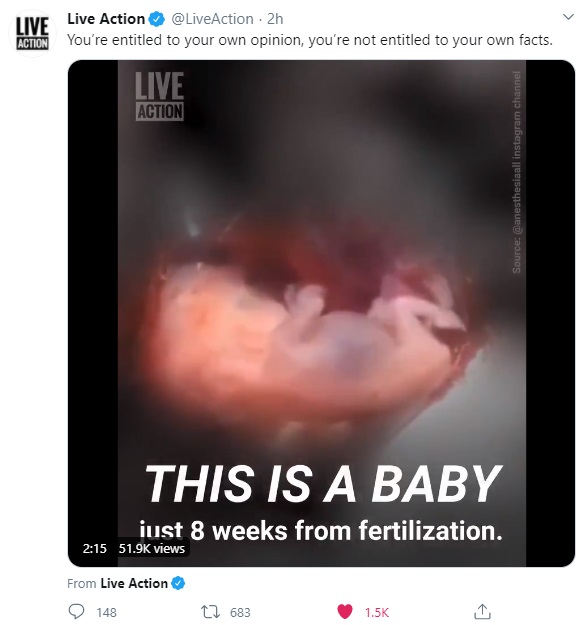 In order to deny long-held scientific evidence regarding the humanity of the preborn child in the womb, abortion advocates do what others have done in seeking to single out an entire group of people: dehumanize them.

Abortion advocates have weaponized language to downplay and even deny facts about human fetal development, including the fact that an embryonic heartbeat can be detected just weeks after fertilization. They have claimed that “late-term abortion” is a medically inaccurate term invented to “distort the truth.” And they have even advised abortion businesses to avoid using humanizing language like “baby,” and to normalize the idea that there is no moral distinction between parenting a child and ending a child’s life in an abortion.

But this dehumanizing rhetoric only works when discussing abortion. After all, they are fully aware that the baby in the womb is human. Even Planned Parenthood’s website features a section on fetal development which acknowledges that at 5-6 weeks, “A very basic beating heart and circulatory system develop.”

In addition, at  7-8 weeks, when many abortions are committed, the abortion corporation acknowledges that: 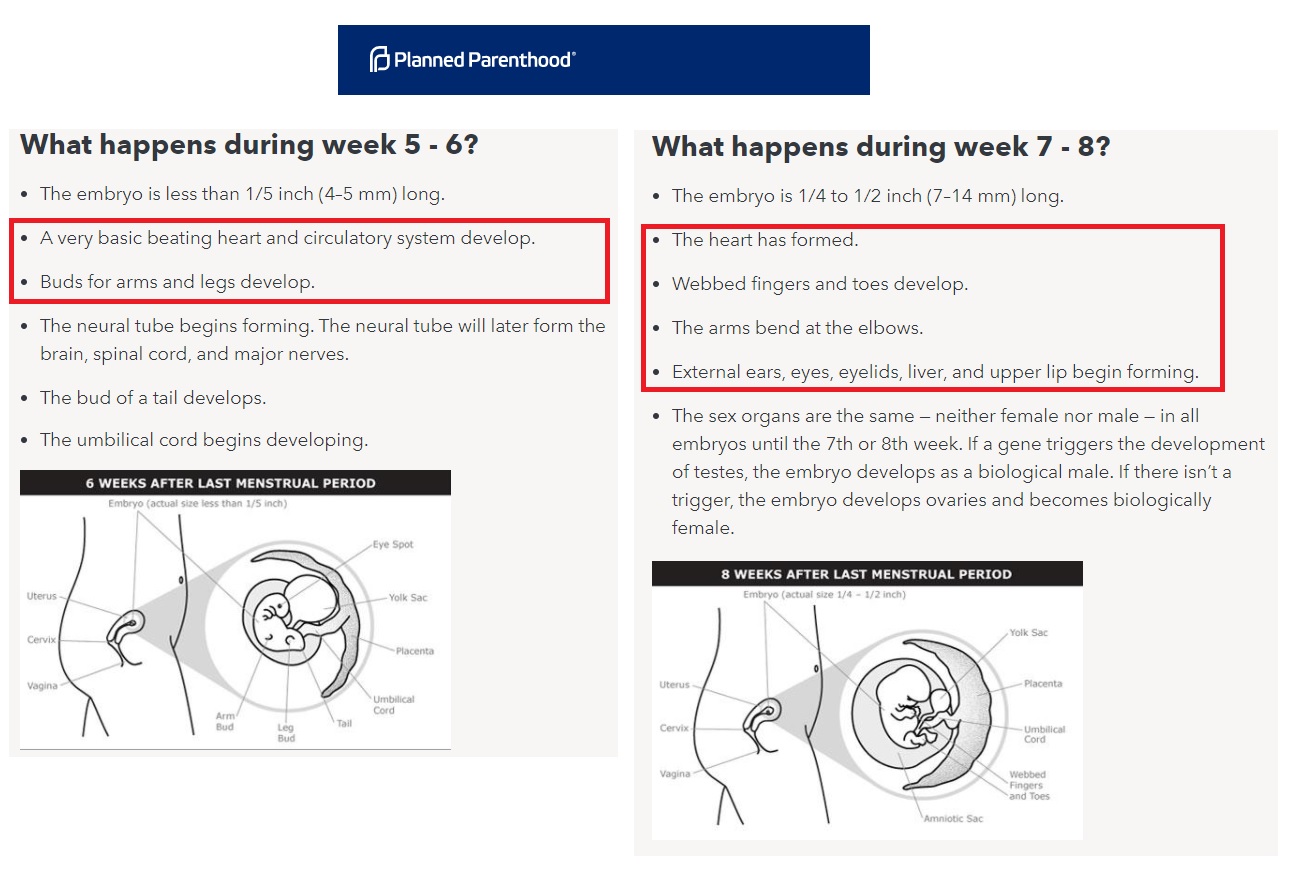 A practice bulletin on “early pregnancy loss” published by the pro-abortion American College of Obstetricians and Gynecologists (ACOG) at one time stated that a heartbeat is a sign of life for the preborn child in the womb. In ACOG’s sixth edition book, “Your Pregnancy and Childbirth Month to Month,” ACOG clearly acknowledges that the preborn child in the womb is a developing human. 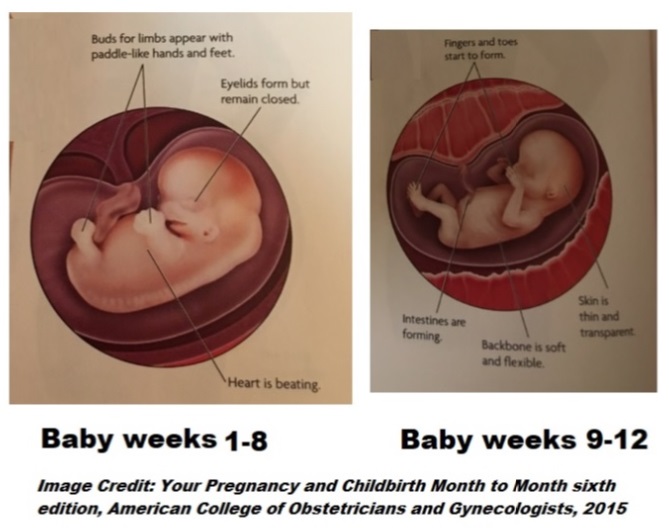 The preborn baby develops rapidly, with a heartbeat that begins beating between 16 and 21 days after fertilization. By four weeks, the buds which will become the baby’s arms and legs are formed. At five weeks, the eyes begin to develop, along with the stomach and the liver. By six weeks, the preborn baby has paddle-like hands and feet, and brain waves can be detected.

At seven weeks gestation, the preborn baby’s bones begin to grow, and all four chambers of the heart have formed. The baby’s eyelids start to cover the eyes at eight weeks, along with 90% of all bodily structures present in adults. By nine weeks, hair follicles are forming all over the baby’s body, as well as fingernails and toenails.

At 10 weeks…the baby can swallow, scratch his head, and form fists.

Science is clear that abortion ends the life of a unique human being, seen the video below documenting the first 10 weeks of life: