Live Action News has previously explained how a natural miscarriage is not an abortion, yet the abortion industry may be seeking to blur the line between the two, conflating natural “pregnancy loss” with the intentional ending of a preborn child’s life via the abortion pill and “self-managed” abortion.

It raises suspicion when abortion-connected authors are involved with a study on miscarriage. A recent study funded by “an anonymous foundation and published by the Journal Contraception,” claimed to “explore the accuracy and completeness of information provided about miscarriage on consumer-facing websites.” The study was co-authored by abortionist Daniel Grossman, a former NARAL board member and abortion trainer leading the push for “self-managed abortions” and the removal of safety requirements put in place by the FDA on the abortion pill. Grossman is one of two abortionists recently recruited by Facebook’s “fact checker” to fact check Live Action founder Lila Rose’s claim that abortion is never medically necessary. Grossman is director of University of California San Francisco’s (UCSF) Advancing New Standards in Reproductive Health (ANSIRH), a pro-abortion group which publishes workbooks on abortion training), and is part of UCSF’s Bixby Center for Global Reproductive Health. Fellow co-authors Katherine Ehrenreich and Rebecca Kriz are also associated with ANSIRH, UCSF and Bixby. Ehrenreich describes herself on Twitter as “dedicated to… decision making and access to abortion care.” 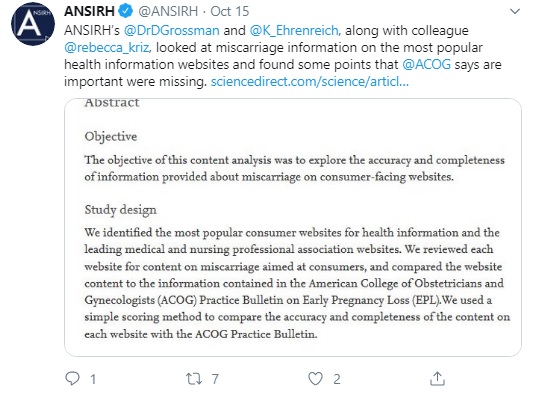 The study looked at health websites “for content on miscarriage” and compared them to information contained in the American College of Obstetricians and Gynecologists’ (ACOG) Practice Bulletin on Early Pregnancy Loss (EPL). Citing a 2012 National Vital Statistics Report, the study states, “Each year, over one million women in the United States experience a miscarriage”:

Interestingly, the use of progesterone for a miscarriage is seen as acceptable, but using progesterone to reverse the effects of the abortion pill has been described by abortion enthusiasts and the media as a “scare tactic” and as “medical theater.” Live Action News previously pointed out this hypocrisy on abortion pill reversal (APR) here.

ACOG’s bulletin says the abortion pill mifepristone should be used in managing a miscarriage.

“Because the techniques for vacuum aspiration and medication management are essentially identical for miscarriage and abortion care, family planning clinicians commonly provide both services and have advocated for the implementation of evidence-based management of early pregnancy loss,” the study states. 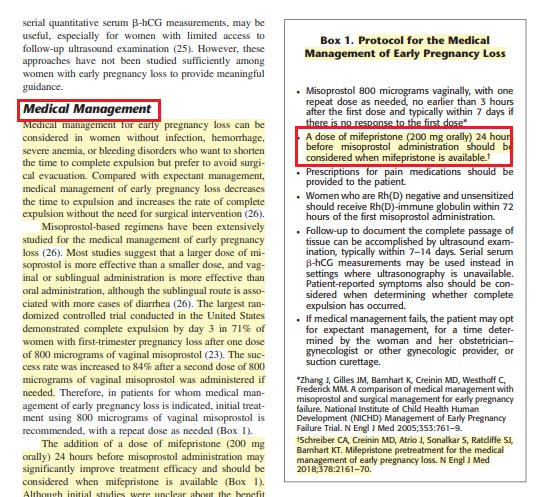 “Only two sites named misoprostol as a medication that can be used in miscarriage management, and no site mentioned use of mifepristone,” study authors noted. Due to safety restrictions on the abortion pill put in place by the FDA under a system called REMS, promoting mifepristone for miscarriage may actually be an attempt by the abortion industry to convince the FDA to lift those restrictions so abortion pills can be sold in pharmacies or online and by TelAbortion.

The reasons for this suspicion regarding mifepristone and miscarriage are numerous. Live Action News has documented:

Whether the abortion industry is seeking to mainstream elective abortion by making the definition murky and mixing it with terms like “early pregnancy loss” and “miscarriage” isn’t certain yet. But one thing is clear: when it comes to accurate information on abortion, the abortion industry cannot be trusted.