Part of an expanding TelAbortion clinical trial, one abortion chain claims one of its goals is to promote the idea that abortion is “normal.” In its latest annual report, Carafem claims part of its mission is to “use our public voice to destigmatize and normalize abortion for what is it — a normal, common, and safe form of health care that one in four people will experience in their reproductive lifetime.” The only problem with that statement is that abortion is anything but “normal.” It may be far too common, violently ending the lives of 2,363 preborn children every day — and sometimes even ends the lives of their mothers — but killing one’s own children can never be considered “normal.”

Carafem is part of a Telabortion trial being conducted under the sponsorship of Gynuity Health Projects (GHP), funded by organizations with deep historic ties to the American eugenics movement. These trials seek to offer deadly abortion pills without important in-person visits to properly assess gestational age or rule out life-threatening ectopic pregnancies. These safety requirements were originally put in place by the U.S. Food and Drug Administration (FDA).

The video below shows just how amazingly well-developed a preborn child is at 10 weeks:

Carafem commits abortions at four locations in Atlanta, Chicago, the District of Columbia, and Nashville. The abortion chain has vowed to expand further in 2021, and said in its 2020 report that it has “served hundreds of clients in our health center with a remote physician through secure video technology.”

Behind Carafem is a group called FemHealth USA, Inc., which reportedly “was established in 2013 as a 501c3 non-profit social enterprise to deliver early, safe abortion services and family planning products in the USA and to take advantage of new efficiencies, new technology, and new approaches in the delivery of care.” This is confirmed by its most recent business filing with the Georgia Secretary of State.

According to DKT’s published donor list, DKT International is heavily funded by the Gates, Packard, and Hewlett Foundations.FemHealth/Carafem is also funded by the Packard and Hewlett Foundations. In 1996, the Packard Foundation gave $14.2 million to help establish the pill’s manufacturer, Danco Laboratories, Inc., during the early stages of the abortion pill’s (RU-486) FDA approval process. Packard is also now investing millions in GenBioPro, Inc., a company the FDA approved in 2019 to manufacture a generic version of the abortion pill.

In 2013, Philip Harvey resigned as president of DKT and was replaced by Christopher Purdy. Today, both Harvey and Purdy sit on the board of Carafem and have for a long time, with Purdy reportedly serving as Carafem’s President and CEO. 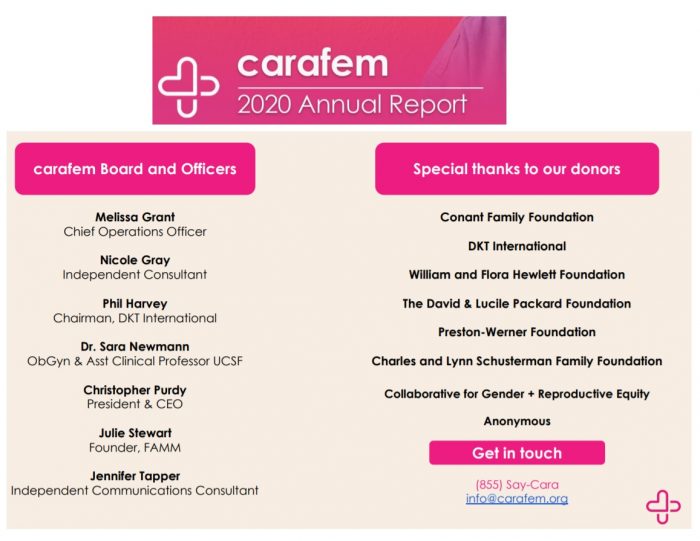 Dr. Sara Newmann also serves on Carafem’s board. Newmann is an OBGYN listed as an Assistant Clinical Professor at University of California San Francisco’s Bixby Center for Global Reproductive Health, which trains abortion providers and is funded in part by the taxpayer.

Carafem’s Chief Operations Officer is Melissa Grant, who was formerly employed by Planned Parenthood of the Heartland and currently serves as a member of the National Abortion Federation board, the nation’s largest abortion membership organization.

In addition to actual revenue from abortion, Carafem has claimed in its 2020 report that media impressions received in 2019 (possibly due to attention from largely pro-abortion media on abortion pill expansion) garnered them “$8.3 million dollars in comparative ad value.”

Carafem’s revenue shows there is a great deal of money to be made from abortion and more the abortion pill. Live Action News has previously estimated that the larger abortion industry is set to gross nearly $200 million annually in abortion pill sales — twice as much money as initially projected. No doubt, this is why Carafem’s goal is to “normalize” abortion as much as possible.